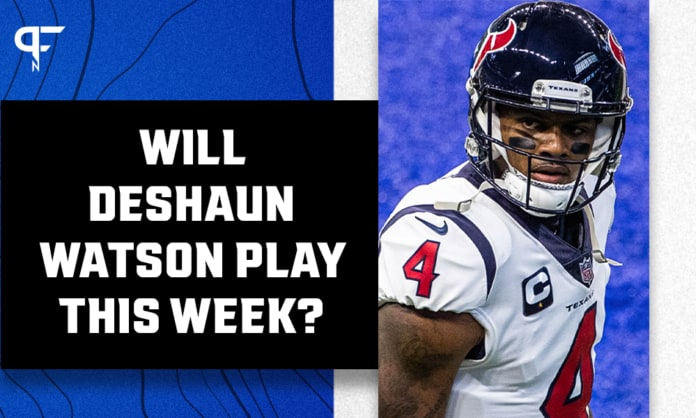 After an injury to starting QB Tyrod Taylor, who will the Houston Texans turn to at the position? Will Deshaun Watson play vs. Carolina?

As long as he remains on the roster, Houston Texans QB Deshaun Watson will be a polarizing conversation topic. Watson has not dressed in either of Houston’s first two games in 2021, but things may be changing due to necessity.

With an injury to starting QB Tyrod Taylor, Watson’s status this week will be a major topic of discussion.

The latest with Deshaun Watson

There has been a lot of discourse about Watson’s status for the Texans this offseason. But through two weeks of the regular season, not much has changed. He still remains on the team’s active roster but has not dressed for a single game.

Watson has been accused of sexual assault and inappropriate behavior and currently faces 22 active lawsuits. Though heinous in nature, the charges he’s currently facing have yet to restrict him from any team activity. Watson requested a trade back in January after expressing displeasure with how the Texans franchise was being managed. Sitting at 1-1 following a Week 2 loss, Houston is continually answering questions on his status.

Steadfast in their stance of wanting a “king’s ransom” for Watson, Houston is reportedly asking for a package of six players plus draft capital in exchange for Watson. Now, with an injury to the quarterback starting in Watson’s place, his name continues to pop up.

Will Watson play in place of Tyrod Taylor in Week 3?

The Texans signed Tyrod Taylor in the offseason after realizing Watson had likely played his last down for the franchise. A Taylor-led Texans team defeated the Jaguars in Week 1 before dropping their most recent contest to the Browns.

Taylor was injured on a touchdown run against Cleveland and did not return. Speaking to reporters, head coach David Culley said he made the decision not to bring Taylor back into the game due to long-term injury effects. Though Taylor expressed his desire to re-enter the contest against Cleveland, Culley told the veteran quarterback Houston would be turning to rookie QB Davis Mills for the “long haul.”

Now, with a short week of preparation ahead of their Thursday Night Football game against Carolina, Houston will once again turn to Mills.

Although Taylor has been officially placed on IR, Culley said that Watson will not practice this week. He will be inactive for the Week 3 matchup against Carolina. The Texans will likely promote QB Jeff Driskel from their practice squad to serve as their backup quarterback.

Mills put Houston in a position to win against Cleveland and will now make his first career start. Watson, meanwhile, isn’t part of Houston’s plans.