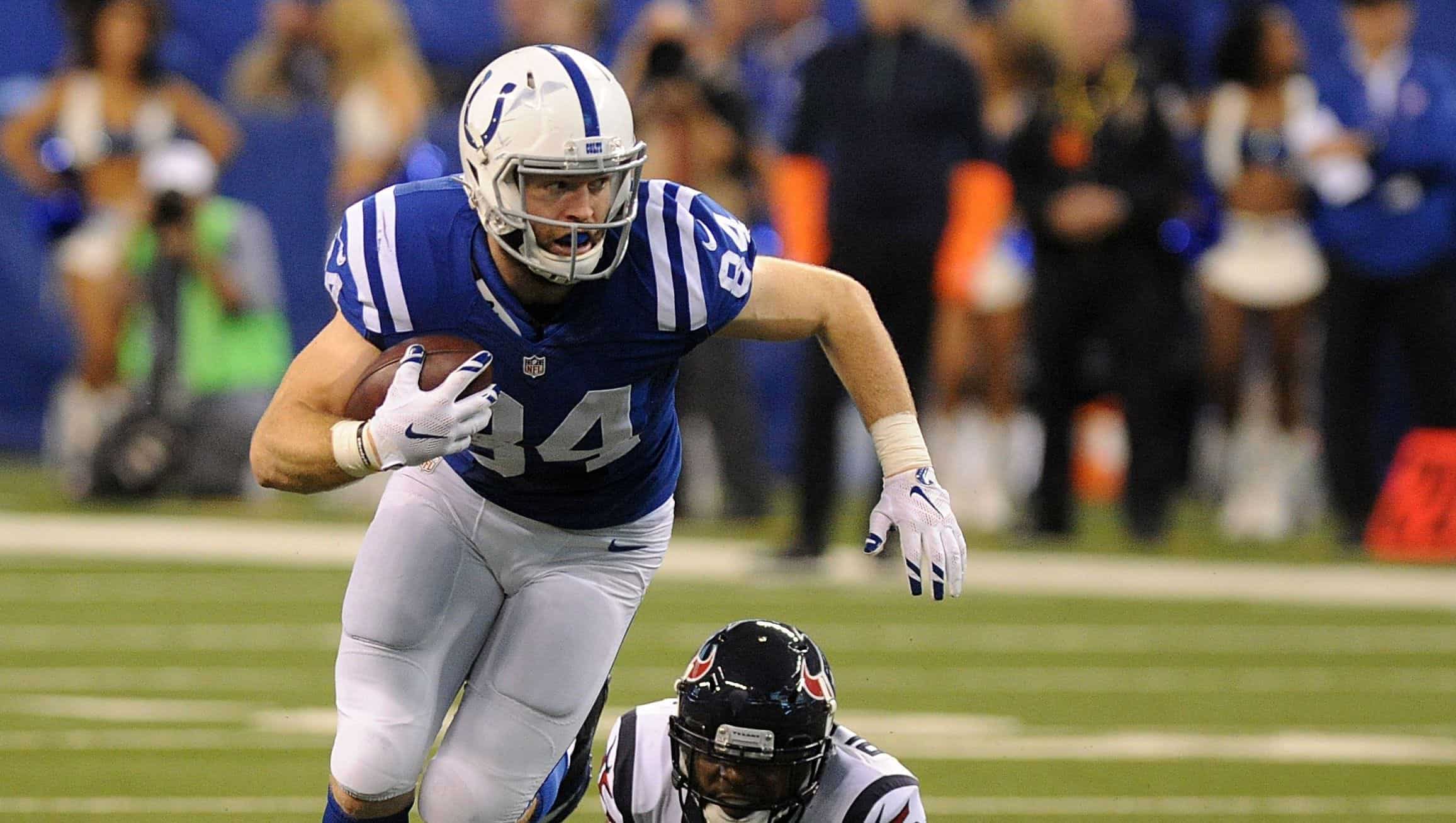 Jack Doyle’s dynasty value in 2020 is severely underrated. I understand why, too, when we’re doing tight end rankings. We’re in a new generation of tight ends. Travis Kelce and George Kittle are all-around playmakers. Evan Engram and Noah Fant are athletic marvels who play like wide receivers. Mark Andrews and Zach Ertz are focal points of their teams’ offenses and will never let you down.

But Jack Doyle DOES have fantasy value, and he WILL be relevant. So let’s delve a little deeper and look at why he is one of fantasy’s top tight end sleepers.

Jack Doyle is the TE1 on the Colts

Doyle tied Zach Pascal for the team lead in targets in 2019. There’s no doubt that injuries played a part in that, with T.Y. Hilton and Eric Ebron both missing time, but Doyle was a big part of their plans.

Ebron left to join the Pittsburgh Steelers in free agency, and the Indianapolis Colts signed Doyle to a three-year extension, proving how highly they value him. They signed Trey Burton to a cheap one-year deal, but he’s coming off a disastrous season, catching only 14 passes for 84 yards, despite being a marquee signing for the Chicago Bears a year previously. His contract has no guaranteed money and is in line with veteran depth competing for a roster spot.

Elsewhere on the depth chart, Mo Alie-Cox didn’t take the step that many were hoping for in his second year, and he looks to be more of a backup than a player with any serious chance of becoming a fantasy-relevant starter.

Doyle has consistently performed well in PFN Offensive Share Metric (OSM), finishing 2016 as TE2 and 2017 as TE3. An injury-plagued 2018 meant that he didn’t get a season grade, but he returned in 2019 and finished the season as TE20, repaying the Colts’ faith in him.

The free-agent signing of former Los Angeles Chargers quarterback Philip Rivers will relegate Jacoby Brissett to the bench, which is excellent news for Doyle. After two years backing up Drew Brees, Rivers became a starting quarterback in 2006 and quickly established a rapport with his tight ends.

In his 14 seasons as a starter, he’s had a tight end finish in the top 12 in standard fantasy scoring in 13 of them. The lone exception was in 2018 when Antonio Gates returned for his final season following an injury to Hunter Henry. This alone should emphasize Doyle’s dynasty value.

Rivers is 38, and his arm strength isn’t what it was a decade ago. This might affect a deep-threat like Hilton, but it shouldn’t matter for Doyle, who does most of his work in the short and intermediate areas of the field. He should see plenty of targets and has an excellent opportunity to set a career-high in touchdowns, having never scored more than five.

Doyle is a fantasy sleeper

There’s no doubt that Doyle is being undervalued. He finished 2019 as the TE18 in standard scoring, despite only catching 59.7% of his targets, comfortably the lowest catch rate of his career (his previous worst was 71.4% as a rookie). That number is prime for positive regression.

Doyle is 30 years old and being treated as if he’s nearing the end of his career, but that isn’t necessarily true. We’ve seen players like Tony Gonzalez, Antonio Gates, Jason Witten, Benjamin Watson, Delanie Walker, and Greg Olsen continue to produce well into their 30s. Doyle’s game has never been about athleticism, and there’s no reason to expect his performances to deteriorate, which gives him tremendous dynasty value.

Once you go beyond the top tight ends, there isn’t much between the others. Of those players who played more than ten games, Hunter Henry had the eighth-highest points per game with 7.9. After that, there was a huge drop-off, with Tyler Higbee having the ninth-highest with an average of 6.1 points per game.

Doyle has produced before. He was the TE9 in 2017 and the TE13 in 2016. If you’re in a best ball league and looking for a player who could explode in a week, then you might be disappointed, but if you’re looking for a consistent contributor who will get points on the board every week, then he won’t let you down.

Doyle is currently being drafted a lot later than he should be. His dynasty ADP is TE29, despite consistently finishing above that. He could continue to contribute to your fantasy team for years, and he can be acquired for pennies on the dollar.

Andy Gallagher is a writer for the Pro Football Network covering fantasy football. You can follow him @AndySGallagher on Twitter and the PFN fantasy team @PFNDynasty.