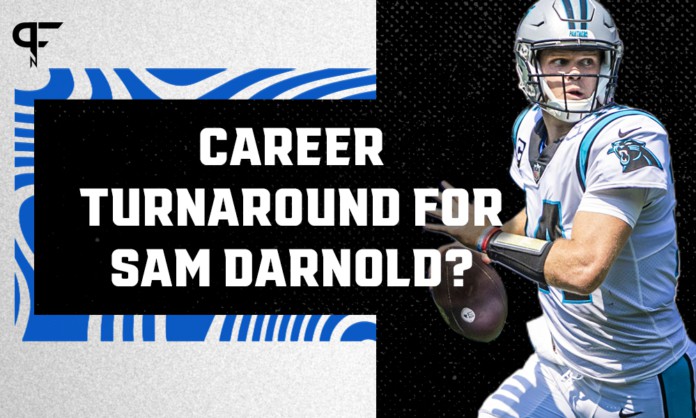 Carolina Panthers QB Sam Darnold and the offense are off to a great start -- Joe Brady has gotten the most out of the former No. 3 pick.

Sam Darnold is a man transformed with the Carolina Panthers. After a failed run in New York, Darnold is playing like the quarterback the Jets envisioned when they took him third overall in 2018.

Darnold, through two games, has taken a quantum leap forward in almost every major (and minor) statistical category.

Is it simply a matter of improved coaching (Joe Brady vs. Adam Gase)? Or is there something more to it?

“I think everyone [is] playing at a high level and the communication [has been] awesome,” Darnold said Tuesday. “For us as an offense, we’ve just been very consistent.”

Darnold was a below-average quarterback with the Jets. He had just 6 more touchdowns than interceptions in three seasons, never completed 62% of his passes, and his QBR was in the 40s all three years.

No surprise, then, that the Jets moved on this past offseason and drafted Zach Wilson No. 2 overall. They decided to move Darnold, finding a trade partner in the Panthers.

But the natural ability that Darnold displayed at USC didn’t just magically vanish. It just needed to be unlocked. Brady, in his second year as Panthers offensive coordinator, appears to have the master key.

Like most things in life, there isn’t just one explanation for this phenomenon. Brady, who most believe will be either an NFL head coach or run a big-time college program this time next year, has been a big part of it.

He’s run a play-action-heavy scheme that has kept Darnold playing under control and avoiding the big mistakes that plagued him in New York.

It’s no coincidence that Darnold is playing his most efficient football. At the same time, he’s averaging the lowest intended air yards per attempt of his career (7.5). Safer, better throws are largely to thank for his bump in completion percentage. Darnold’s average completed air yards (5.1) ranks in the bottom half of the league.

But when he’s gotten the hands of his playmakers — most notably, Christian McCaffrey and DJ Moore — they’ve maximized their opportunities.

Never before has Darnold benefitted from receivers gaining 6 yards after the catch per reception. The Panthers are giving him that in 2021.

Darnold has never enjoyed a drop percentage lower than 4.1% in his three years in New York. So far this year, it’s 2.9%. He’s also cut back on poor decisions (his bad throw rate of 17.4% would be the lowest of his career), and his on-target rate is better than ever (78.3%).

A reasonable assumption, based on those numbers, is that his protection has much improved. That assumption would be wrong. He is on track for the highest pressure rate of his career (29.9% of dropbacks) and has taken less time to throw (his 2.3 seconds of pocket time is also the lowest of his career).

Nonetheless, Darnold’s also never had a weapon quite like McCaffrey, who leads the NFL in yards from scrimmage (324) and ranks sixth in rushing (170).

If he can avoid the critical errors, there’s no reason to believe Darnold will backslide this week. The Texans host the Panthers on Thursday night, and Houston ranks in the bottom half of the league in every major defensive category but interception rate (5.6%) and third downs (35%).

Houston’s secondary might be the strength of the entire team, with cornerbacks Vernon Hargreaves and Terrance Mitchell both playing very well to start the season.