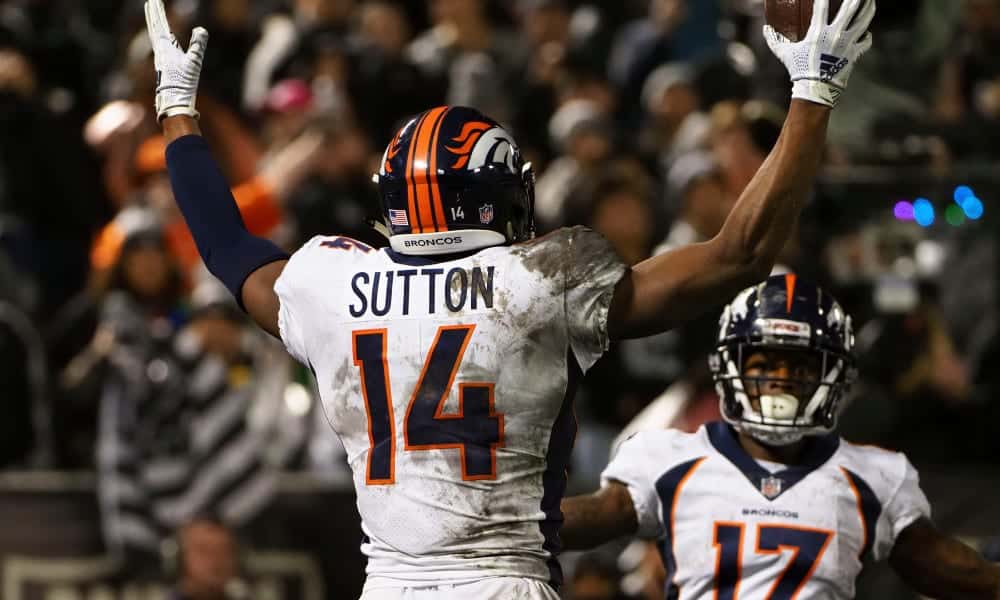 Dec 24, 2018; Oakland, CA, USA; Denver Broncos wide receiver Courtland Sutton (14) celebrates with wide receiver DaeSean Hamilton (17) after a touchdown against the Oakland Raiders during the fourth quarter at Oakland Coliseum. Mandatory Credit: Kelley L Cox-USA TODAY Sports
What's in this article? Click to show
Who are the Broncos wide receivers heading into 2020?
Who is in and who is out?
Final three

Somewhere between the unknown and unthinkable, you have the Denver Broncos — the NFL’s most improved team that no one is talking about. Granted, all the pieces will need to be in place for John Elway’s roster to reach the summit, this season could be quite an improvement compared to last. With a heavy focus on the wide receivers, the 2020 Broncos could become a completely different team.

Elway made it clear that his plan was to go all-in on Drew Lock. The second-year standout culminated quality drives last year, leading the team to a 4-1 finish. That was enough for the two-time Super Bowl champ to make moves to enhance the weapons that surround Lock.

Who are the Broncos wide receivers heading into 2020?

The team hired Pat Shurmur, fresh off his second head coaching stint in the Big Apple, to bring relevance to the passing game. They bolstered the trenches, adding Detroit’s Graham Glasgow to protect the left interior side. LSU’s Lloyd Cushenberry, fresh off a national title tout, will become Lock’s best friend up the middle.

But the receiver room is where the conversation began—and boy, are Broncos’ fan freaking out the way the draft board fell. Taking their top player off the big board, Alabama’s Jerry Jeudy will join the likes of Courtland Sutton, Melvin Gordon, Philip Lindsay, and former first-round tight end Noah Fant. On Friday, Elway doubled down to add speed with the addition of Penn State’s KJ Hamler.

“We thought it was a 50-50 whether he would get there or not. We were actually surprised both of them got there — CeeDee as well as Jerry,” Elway said via Zoom on the Crimson Tide target. “What we liked about Jerry was his route-running ability, his speed, to be able to plant his foot and get out of a break, the experience that he has in playing in the SEC, and the impressive production he’s had.”

The ankle-breaking Alabama sensation could be the final piece to the offensive equation that takes Denver deep into postseason play. Throw in Hamler, who’s 5-foot-9 demeanor will play into his 40-time, the Broncos are banging on the AFC West door.

But, like anything in life, one step in equals another step out. And with two new targets fresh to the franchise, one veteran should be dialing up the old resume builder this offseason.

Who is in and who is out?

As PFN Insider Benjamin Allbright detailed in his most recent mailbag, the Broncos will likely part ways with a pass-catcher post preseason. Allbright believes that third-year veteran DaeSean Hamilton could be the odd man out.

A former Nittany Lion, Hamilton’s replacement in college could be taking over in the pros. Regraded for his route running skills down at 2018’s Senior Bowl, the now 25-year-old was revered for his ability to make magic in the slot, along with rhythmic route-running.

That has yet to be seen in the pros after two underachieving seasons. It’s hard to undermine Hamilton as he fell to the 113th selection that April, but multiple scouts called it a “steal” for the Elway-run organization. Two years and 58 catches later, the Penn State product has produced 540 total yards—failing to ever surpass the 300-yard marker for the year.

A quality offseason could either boost Hamilton’s trade value or keep him around another season. Hamler will need time to adjust to NFL life as last season, his 12 drops were tied for the FBS lead. And having a teammate to boost your confidence could only improve all involved.

He’s fast.
He can stretch the field.

“I’ve been talking to him throughout this process,” Hamler said of his former State College teammate, according to USA Today’s Jon Heath. “I don’t know a lot, but DaeSean will help me out through it. He’s my big brother, my older brother, so I know he’ll help me. I’ll be under his wing learning.”

Several names will be set in stone for the impending season. Sutton shined in his second year, hauling in 72 receptions for 1,112 yards and six touchdowns on the way to the Pro Bowl. The same should be said for Jeudy and Hamler, who will hopefully create a trifecta of talent for the emerging offense.

Tight ends will play a role in Shurmur’s offense, but perhaps not as much as one thought. In his final season with the Giants, the now Broncos offensive coordinator used 11 personnel (one runner, one tight end and three receivers) more than any other unit. Still, Fant’s flaws are minor and the team added Nick Vannett as another weapon to their core.

Other wideouts, such as Juwann Winfree, Fred Brown, Kelvin McKnight, and seventh-round selection Tyrie Cleveland, all should be fighting for practice squad spots. And don’t count out Zimari Manning; the 6-foot-2 Tarleton State product could be another undrafted gem that breaks free in Denver.

More than likely, the final spot will come down to Hamilton, Diontae Spencer, and Tim Patrick. If not viewed as an asset, an opening for an unproven potential prospect could send one packing.

Patrick has the ideal size (6-foot-4) to fight against press corners in contested catches. His 4.47 40-time isn’t going to change the game, but it will allow the former Ute utterly entertaining to see come Sunday’s. His only knock will be on his ability to stay healthy after missing eight games with a hand injury.

Spencer’s role is set in the return game. After being claimed off wavier from Pittsburgh, the 27-year-old target tallied 41 total returns for 644 yards and an average of 18.55 per return overall. Hamler, however, could return kicks as he performed under James Franklin, averaging similar numbers to the veteran for his career. If the Broncos keep him away from the offense, this could be their value of taking the second receiver.

Hamilton’s lack of production has been costly to his role moving forward. Much like the team’s transition late, perhaps his growth turned the corner in the final five games. Adding 17 catches for 191 yards and his only score, this could be the right direction the Broncos envisioned when selecting him.

For now, Hamilton is the odd man out. He’ll need to show Vic Fangio he’s worth keeping around as Denver looks for their new trio of targets to replace Emmanuel Sanders, Demaryius Thomas, and Eric Decker that led them to a Lombardi.