Which NFC East team had the most athletic draft class according to RAS?

Using RAS (Relative Athletic Scores), Pro Football Network's Kent Platte breaks down the NFC East's 2020 NFL Draft results. Which team brought in the most athletic talent, and which decided to focus on different characteristics while drafting?

By Kent Platte
May 4, 2020
Jump around this article Click to show
NFC East RAS scores and trends
Who had the most athletic draft class?

With the 2020 NFL Draft now complete, we’re able to take a look back at previous seasons and see if organizations are following any sort of trends from years past. Teams can be unpredictable at times, but they often follow the same sorts of behaviors with regards to decision making and risk management, trends that we can analyze to help us understand the approach to roster building those teams are taking. To that end, we’re going to take a look at every division in the NFL, starting with the NFC East, and review how they’ve drafted in regards to general athleticism.

Relative Athletic Scores, or RAS, compares player athletic testing to all players at that position with a vast database spanning more than 30 years. It then uses those scores to create a composite final score on a scale of 0.00 to 10.00, with 5.00 being the median score. Using RAS, we’re going to look at four division rivals and identify how much athletic testing has played into their draft process in the early rounds.

The Dallas Cowboys have prioritized athleticism early for years, with every single first and second-round pick of the last five seasons (2015-2019) rating in elite range for RAS (8.00 or higher). They’ve taken bigger risks outside of the first round and for the most part those risks have paid off.

The selection of CeeDee Lamb goes against that trend a bit, but he was one good shuttle or cone drill from breaking that 8.00 mark. A half-decent pro day or personal workout could have easily pushed him over the top, this isn’t some lower end of the spectrum athlete. With good size, speed, and explosiveness, Lamb checks all of the athletic boxes he needs to alleviate any concerns that his excellent tape may not translate.

The same can’t be said of third-round pick Neville Gallimore. Gallimore similarly had an above-average score but lacked an elite athletic profile. Unlike Lamb, his RAS doesn’t always line up with the tape. Gallimore measured out well enough, but it’s likely that his insane 4.79 in the 40-yard dash and 1.69 10-yard split helped endear him to the Dallas staff.

Those numbers are absolutely bonkers for a 300-pound player, but Gallimore won as an interior rusher through speed, explosiveness, and agility at Oklahoma. His agility is where the tape and testing don’t line up. His very poor agility grade could be a cause for concern as his style of play might not translate to the NFL.

The selection of Deandre Baker in 2019 was a bit surprising for the New York Giants, who had drafted one of the most athletic running backs ever in Saquon Barkley only a year prior. They also selected the highest RAS linebacker in Lorenzo Carter, who had taken the top spot from Luke Kuechly.

The team didn’t waver from their normal approach in 2019, taking yet another top tier athletic talent in Andrew Thomas. With excellent timed and explosion drills, the team continues to add to an athletic front, trying to keep pace with the Eagles and Cowboys who have always been a bit ahead in that regard. They would bookend that selection with Matthew Peart, another elite athlete at tackle, in the third round.

Sandwiched between the tackle picks was Alabama safety Xavier McKinney. Once considered a sure-fire top-10 talent, concerns about top-end speed got a bit louder by the time the draft began. McKinney fell to the second round before the Giants grabbed him at 36th overall. The speed concerns some had raised on tape showed up in his testing, but his explosion drills are very good for a safety. At his position, if you’re not fast, you want to be explosive and that’s a trait that McKinney brings to the table. 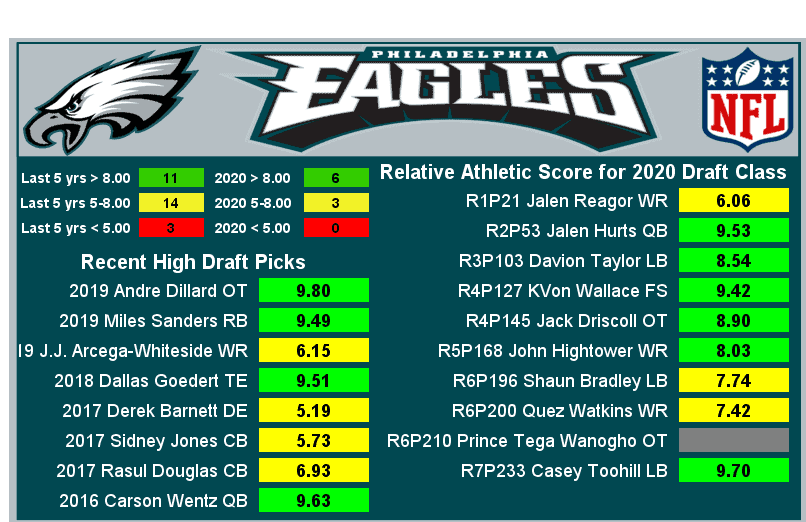 The Philadelphia Eagles have been one of the more notorious teams for drafting athletic talent, especially on the offensive line (they’ve had one of the most athletic offensive lines in history according to RAS and have maintained it over time). It comes as no surprise, then, that they would lean heavily in that direction with their 2020 Draft class, taking one of the most athletic quarterbacks with their second-round pick and taking four more elite athletes immediately after.

It would come as more of a surprise that the Eagles first-round pick was also their poorest testing athlete, but it may come with a bit of an asterisk. Now, based on how all of the ‘virtual pro days’ we saw this off-season went, it’s probably just wishful thinking to use those times. However, Reagor was expected to run much better than he did at the combine and came in significantly heavier than his playing weight which may have contributed to the poorer times. In any event, his speed is fine and he tested out as one of the most explosive players at the NFL Combine, and those are two athletic traits you can build a very strong career on without much development.

The selection of Jalen Hurts in the second round was one of the most controversial picks of the entire 2020 NFL Draft, but taken in a bubble as simply finding an athletic playmaker, it totally fits what the Eagles have liked to do. In addition to posting a 9.51 RAS at quarterback, he would have scored a 9.12 at running back, a 7.88 at tight end, and a 7.60 at wide receiver. This is a player with clear athletic potential, and a smart offensive coordinator should be able to find a role for him even if it isn’t as a starting QB.

Dwayne Haskins aside (as quarterback RAS is more type than projection), the Redskins have not been afraid to mix it up with the types of athletes they have brought in. While second overall pick Chase Young didn’t test, he was expected to measure in a similar range to former first overall pick Myles Garrett (9.99 RAS), and his floor was probably in the Von Miller range (9.39 as a DE). Outside of the unknowns with Young, the team generally played the ‘type’ game with their other picks, taking players who fit specific types of roles rather than simply being athletic phenoms that you try to slot in wherever you can.

With no second-round pick for the Redskins, we have to look at their third-round selection of Antonio Gibson. With an elite RAS at both wide receiver and running back, and the versatility to play both, Gibson is truly an example of taking an athlete who can do a bit of everything and seeing what you can do with him. There aren’t a lot of nearly 230-pound players who can run a 4.39, so this has to excite Redskins fans a bit. 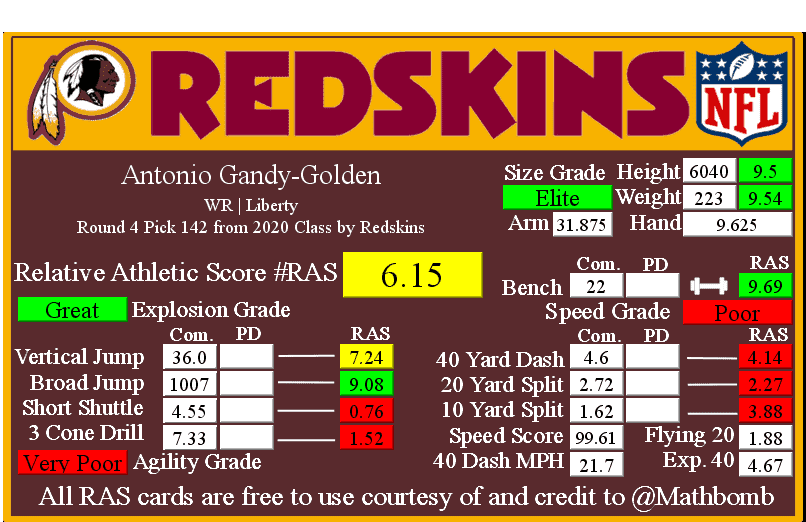 A round later, the Redskins would take a completely different type of receiver in Antonio Gandy-Golden. A huge target, Gandy-Golden doesn’t rely on speed or agility to win on a football field, so his poor scores in those areas should neither surprise nor concern too many folks. This is a player who wins by being bigger and more explosive off the line than the players lined up across from him and that’s how he tested. Players like this don’t tend to be too flashy but can have long careers as WR2 or even WR1 in some schemes simply because you can trust them to get the ball if you get it out quickly.

Who had the most athletic draft class?

While the Dallas Cowboys and New York Giants took some big swings both early and late, and the Washington Redskins generally played it safe by not taking any below-average athletes, the Philadelphia Eagles added the most athletic talent to their roster in the draft both in volume and quality of talent. Taking more than twice the number of elite athletes as any other team in their division, they did the most to add speed, explosion, and agility to their roster. How that translates on the field will remain to be seen, but this division didn’t really leave a lot of room for interpretation.