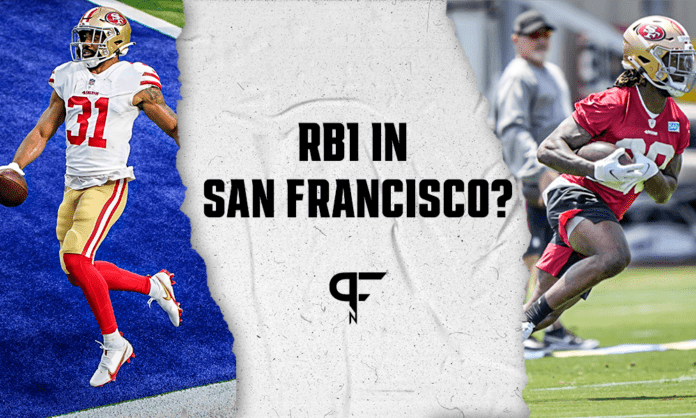 Which 49ers’ RB should you target in fantasy football in 2021?

Kyle Shanahan is known for running the football, but are either Raheem Mostert or Trey Sermon worth targeting in this crowded 49ers' RB room?

By Eric Frosbutter
July 31, 2021
What's in this article? Click to show
Which 49ers’ RB should you target for fantasy in 2021?
49ers’ backfield too good for fantasy production to ignore
Trey Sermon is the 49ers’ RB to target in 2021

Year after year, trying to figure out which San Francisco 49ers’ running back(s) to target in fantasy football drafts is challenging. Nevertheless, despite the logjam at RB, 49ers head coach Kyle Shanahan’s dominant rushing attack is one fantasy managers simply cannot ignore. Raheem Mostert and Trey Sermon seem like the popular picks early on, but is there another 49ers’ RB that should be targeted in fantasy for 2021?

It’s one of the most difficult questions to ask in fantasy football. After all, who is the best running back on the 49ers’ roster?

With the departures of Jerick McKinnon and Tevin Coleman, things looked to be clearing up in San Francisco’s backfield. Mostert and Jeff Wilson were far and away the most productive 49ers’ RBs in 2020. Thus, having them as a one-two punch in 2021 would have made sense. Shanahan and GM John Lynch, however, had other plans.

In April — a week ahead of the 2021 NFL Draft — the 49ers signed RB Wayne Gallman to a one-year deal. Gallman did a nice job for the Giants last season in place of the injured Saquon Barkley. In fact, from Week 7 on, Gallman was the RB16 for fantasy in PPR formats. At 12.2 points per game, he was one of the more consistent backs to own during that stretch (10 games).

Following Gallman’s signing, the consensus thought was that the 49ers would ignore RB in the NFL Draft. That was not the case, however. San Francisco doubled down on the position during the three-day process. First, they took Sermon out of Ohio State in Round 3. Then, on Day 3, the 49ers went back to the well with Louisiana’s Elijah Mitchell in the sixth round.

For most teams, this would seem excessive. Yet, given Shanahan’s offenses are well-known for running the football — and the 49ers’ injury history — it makes sense.

49ers’ backfield too good for fantasy production to ignore

While it makes sense from a strictly football perspective, the added bodies in the 49ers’ backfield are one of annoyance for fantasy managers. RB committees are typically avoided as much as they can be in fantasy, and it’s a logjam at the moment in San Francisco.

Regardless, Shanahan’s rushing attack — coupled with what 49ers’ RBs have been able to do in the past for fantasy — has fantasy managers scrambling to find out which is the one to target in 2021.

This trend was similar in the years prior. The problem was that you didn’t know which RB it was going to be unless there was an injury.  In 2021, the approach is much of the same.

To start 2020, Mostert seemed to be the guy in the 49ers’ backfield. He was the RB7 in fantasy in the first two weeks, averaging 21.9 fantasy points. Injuries then played a factor for Mostert, and he was in and out of the lineup for the rest of the season.

Of the 49ers’ running backs, Mostert is currently the most sought-after in redraft leagues as the RB31 with a 74.9 ADP. He is likely the lead guy for San Francisco to start the year, but for how long remains to be seen.

Wilson was a league winner to end 2020. Yet, he’s never played more than 12 games in a season, and he won’t start to in 2021. In May, Wilson underwent surgery for a torn meniscus. He expects to be out for the first 4-6 weeks of the year.

With an ADP of 95.0, Sermon may be going after Mostert in drafts, but he’s climbing. In eight games last season with the Buckeyes, Sermon averaged 7.5 yards per carry on 116 rush attempts for 870 yards and 4 touchdowns. That includes a 193-yard performance against Clemson in the semifinals of the College Football Playoffs.

While he may not produce much to start the season, Sermon may be the 49ers’ RB to have down the stretch.

When looking at it from a long-term perspective, Sermon is the back to target in San Francisco. Seeing as Mostert will surely be the lead RB to begin the year for the 49ers, I wouldn’t be opposed to drafting both players back-to-back if the opportunity arises.

Wilson is intriguing upon his return, but he’s not worth targeting in drafts. Let someone else take him — chances are they will either grow impatient or be forced to drop him for an active player. This will allow you to scoop him up just before his return. Assuming he can stay healthy in the second half of the season, Wilson should have some standalone value to end the year.

San Francisco traded up for Sermon

It’s important to keep in mind that the 49ers dealt with the enemy (Rams) to move up in the draft to take Sermon. Anytime a team moves up for a player, it sends a message. And in this case, I’d say the message is that Sermon will be the guy sooner than later.

The RB room is obviously crowded. Still, one would assume that the 49ers will begin narrowing the field as we get closer to the 2021 campaign.

Wilson will begin on the PUP list, leaving Gallman and Mitchell to battle it out for the RB3 spot. With such a crowded field, second-year player JaMycal Hasty could be a cut candidate or start the year on the practice squad.

There’s also the possibility one of these backs gets traded. In that case, other teams are likely to pursue Mostert. Sermon’s fantasy value would skyrocket if that were to happen. At any rate, Sermon’s value, as it currently stands, will be looked at as a steal if he is the 49ers’ lead RB down the stretch.