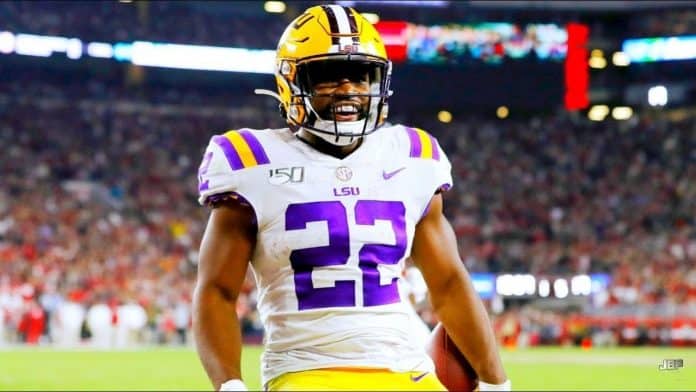 Where should you draft Clyde Edwards-Helaire in fantasy in 2020?

Clyde-Edwards Helaire was drafted into an offense that is well-suited for his skillset. But what does that mean for his 2020 fantasy outlook?

What can my fantasy football team expect from Clyde Edwards-Helaire?

So what kind of prospect is Edwards-Helaire? First, he is an elite receiving back. He is fantastic in space and is a top route runner as running back prospects go. LSU and Joe Burrow used him accordingly at a very high level in an elite college offense. That receiving skill should immediately translate to the league.

While Edwards-Helaire is certainly short, he is not small and doesn’t lack girth or power. He runs extremely low to the ground with great contact balance, and is very difficult to knock off his pins. He is best as a zone runner but should be fine carrying the ball in any scheme, and that includes running outside the tackles or up the middle.

Edwards-Helaire is a very dangerous and very versatile player, but Edwards-Helaire isn’t without his weaknesses. First off, he was not good in protection at the college level. There were times he looked disinterested in even chipping an edge pass-rusher, and when asked to stand up a blitzer – which LSU didn’t often ask him to do – it didn’t usually go well for him.

Also, there has to be some concern about what type of workload he can withstand, and if he will thrive in short-yardage situations at the pro level, which is extremely important for fantasy football and something to note for Edwards-Helaire’s fantasy outlook in 2020.

But what an amazing situation Edwards-Helaire finds himself in with the Chiefs. This is an elite offense that will rack up tons of yardage and points with Patrick Mahomes running the show. It also is designed as well as any scheme in the league masterminded by Andy Reid.

Kansas City certainly didn’t need another ultra-dangerous weapon, but that is precisely what they got with their first-round pick. And that should terrify the rest of the league. Also, dating back to Duce Staley and Brian Westbrook, Reid’s top running back historically crushes it for fantasy.

Being drafted by the Chiefs boosts Edwards-Helaire’s fantasy outlook a great deal. And while he does have concerns in pass protection, something that often keeps rookie running backs off the field, Kansas City had to be aware of this concern when they turned in the card for Edwards-Helaire on draft day. They have a plan in place in this regard, but no matter how well an offense is schemed, it is challenging for a running back to avoid pass protection at this level of play.

What concerns are there for Edwards-Helaire and his fantasy outlook?

That is one concern for sure about Edwards-Helaire when comparing him to other first-round running backs for fantasy. Another concern is that Reid runs the ball very little in the first half of games. That could result in many early game targets for Edwards-Helaire, but the initial lack of carrying opportunity doesn’t help his cause.

And what if the Chiefs have a big lead in the second half of games and are then looking to grind out the clock? Will Edwards-Helaire get that role, or will they save him for when his playing time means more to Kansas City’s chances of repeating as Super Bowl champions? Also, once again, what if Edwards-Helaire isn’t the Chiefs goal line back?

Edwards-Helaire is worth much more in PPR fantasy leagues without question, and you don’t have to squint too hard to see this player going at the very top of fantasy drafts a year from now. There should be a lot of excitement about Edwards-Helaire’s combination of talent and landing spot, but don’t think there are not some concerns in a difficult year to get rookies up to speed and trusted.

Should I draft Clyde Edwards-Helaire in fantasy football in 2020?

Edwards-Helaire’s fantasy outlook is skyrocketing right now, and there are drafts when he goes off the board right after the “Big Four” of Christian McCaffrey, Saquon Barkley, Ezekiel Elliott, and Alvin Kamara.

When it is all said and done, the rookie might warrant such a high pick, but there are risks and unknowns with this guy too. But if Edwards-Helaire lasts towards the end of the first round, jump all over him. Still, he is an unknown.