When does the college football season start? Here is everything you need to know for the opening weekend action including channels and times.

By Cam Mellor
August 10, 2021
Jump around this article Click to show
When does the 2021 college football season start?
Who is playing during Week Zero?
Do you like NFL news and analysis too?

The 2021 college football season finally starts this month as Alabama looks to defend their 2020 title. In what is known as “Week Zero,” there will be a total of 10 teams kickstarting their quest for a national championship. The next week, the rest of the nation will follow suit, with more than 50 games taking place over a five-day span. Here are all of the TV channels, start times, and live stream options for the opening weekend of college football.

When does the 2021 college football season start?

The season officially begins with the opening weekend kickoff game on Saturday, Aug. 28, at 1 PM ET on FOX. Nebraska will be taking on Illinois in Champaign, Illinois. Neither Nebraska nor Illinois were ranked in our preseason top 25 college football rankings, but both have high hopes heading into 2021.

Last season, Illinois embarrassed Nebraska with a 41-23 victory behind then-starting quarterback Luke McCaffrey. Last year, McCaffrey put forth a poor showing against Illinois, finishing 15-of-26 for 134 yards and threw 3 terrible interceptions. Adrian Martinez is back for his fourth season at the helm this year, having thrown for over 5,600 passing yards and 53 total touchdowns in the three seasons prior. 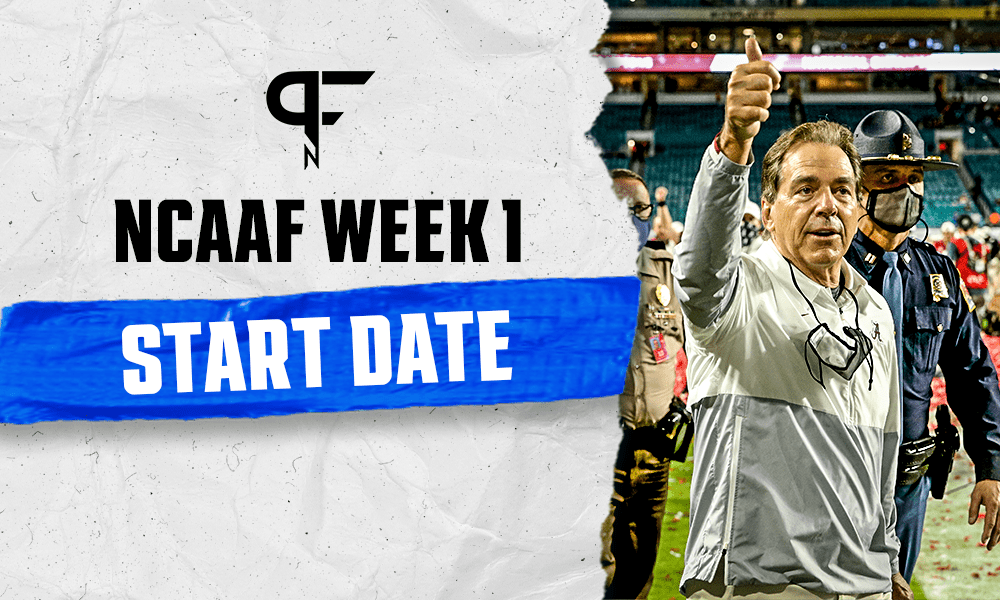 Who is playing during Week Zero?

Here are all of the teams playing in Week Zero during college football’s opening weekend. All listed times are ET.

The UConn Huskies will play their first game in almost two years — the last time they took the field was November 30, 2019. After opting out of their 2020 season, Randy Edsall has a lot to prove in his fourth season as UConn’s head coach.

On the flip side, Fresno State enters this season after a great first year under new head coach Kalen DeBoer. Now in his second season, the Bulldogs have an answer at quarterback in Jake Haener. The former Washington transfer landed 21st on our College Football QB Rankings.

This meeting will be the first time these two programs have met on the gridiron.

The UCLA Bruins have had no success in out-of-conference matchups under head coach Chip Kelly, fielding a 0-6 record against non-Pac-12 opponents in his three seasons at the helm. In fact, Kelly-led UCLA teams have not won a season-opening game since he joined the program in 2018.

They’ll look to change that trend after a solid 2020 campaign that saw them turn a corner with starting quarterback Dorian Thompson-Robinson. DTR finished the season with a career-high completion percentage and touchdown-interception ratio while posting his third season in a row with an increased passer rating.

Hawai’i enters with a talented quarterback themselves in Chevan Cordeiro, who threw for 2,083 yards and 14 touchdowns a season ago. However, second-year head coach Todd Graham will have his hands full as the Rainbow Warriors are 0-3 lifetime against UCLA.

Similar to UConn, the New Mexico State Aggies will play their first regular-season football game against an FBS opponent in nearly two years. Though they played a two-game season earlier this spring, the Aggies last played an FBS foe on November 30, 2019.

New Mexico State’s last win against an FBS opponent happens to come against UTEP as well, giving even more intrigue to the Battle of I-10 this year. UTEP and head coach Dana Dimel have begun to turn the corner as a program, winning three games a season ago after finishing 1-11 in 2019.

UTEP has several promising players on the roster, most notably their quarterback, Gavin Hardison. Hardison checked in at No. 43 in our College QB Rankings compared to Jonah Jackson at New Mexico State, who landed at 126th out of 130.

San Jose State gets started on their Mountain West Championship defense with Southern Utah after the Spartans defeated Boise State 34-20 to win the conference last year. Quarterback Nick Starkel will take the field for the fifth year as a college quarterback, but only the second time returning as the incumbent starter for a program.

The pieces are there for SJSU to defend their title, and this run-in with the Thunderbirds should kick things off right.

Be sure to follow us on Twitter (@PFN365) to stay in the loop on all things around the NFL. Also, bookmark us for college and NFL news and in-depth analysis concerning the 2021 season and beyond.

Cam Mellor is the Senior Director of the College Football/NFL Draft vertical for Pro Football Network. You can find his writing here. Follow him on Twitter: @CamMellor.