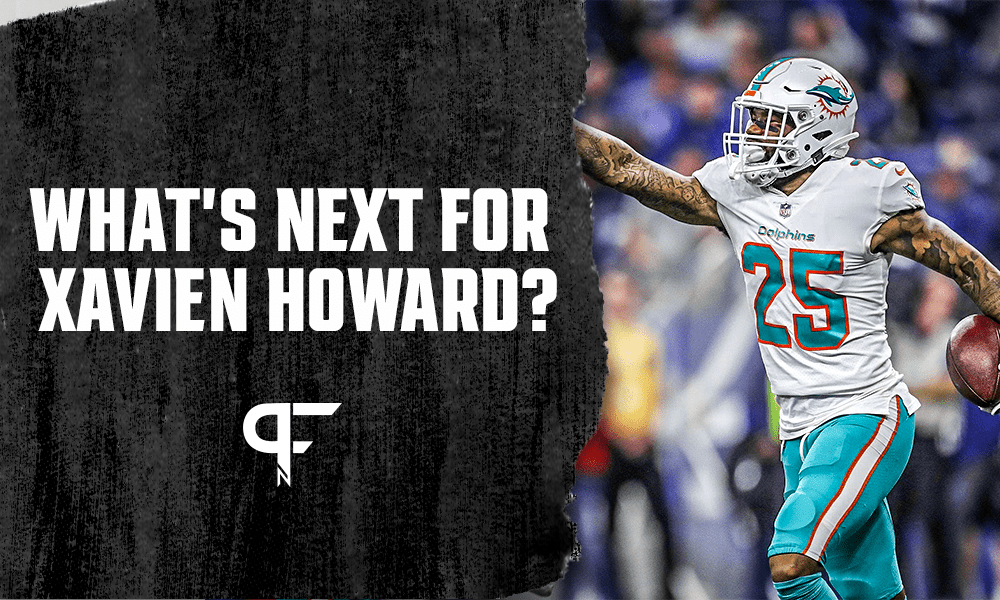 What’s next for Xavien Howard and his future with the Dolphins?

PFN NFL Insider Adam Beasley breaks down the latest regarding the ongoing standoff between Xavien Howard and the Miami Dolphins.

By Adam H. Beasley
July 28, 2021
What's in this article? Click to show
Can Xavien Howard and the Miami Dolphins find a middle ground?
Are Xavien Howard and Aaron Rodgers foreshadowing a changing tide?
Want more NFL news and analysis?

Xavien Howard honored his commitment. He reported to Miami Dolphins training camp Wednesday. He dressed for practice and was a full participant.

And he kept quiet, letting his bombshell statement from late Tuesday do the talking. No more social media posts. No news conferences.

He’s said all that needs to be said. He wants out.

Can Xavien Howard and the Miami Dolphins find a middle ground?

“I support X with whatever decision he has,” Dolphins quarterback Tua Tagovailoa said Wednesday. “He’s helped our team tremendously throughout the years. I’ve only been on this team for one year and I’ve been able to see what he’s been able to do. But that’s not in my control. But I support him.”

However, their bosses — specifically Chris Grier and Brian Flores — aren’t willing to do what needs to be done to make Howard happy.

And, from what we hear, it won’t take much.

Regardless of the spin from his former agent Damarius Bilbo at the time, Howard never really was the highest-paid cornerback in the NFL. The contract he signed in 2019 paid him less than $13 million annually, not the $15 million that was advertised.

Howard, in his late Tuesday Instagram post, insisted he was not fully informed about the details. But he began to catch on when the cornerback market exploded the following offseason. The Dolphins helped set that market by pledging $82.5 million over five years to free agent Byron Jones.

Suddenly, Howard wasn’t even the highest-paid corner on his own team

He complained to Bilbo about it. Bilbo couldn’t fix his mistake and got fired because of it. Enter David Canter, always a passionate (and occasionally outspoken) agent who lives 15 minutes from Hard Rock Stadium.

Canter tried for months to quietly satisfy Howard’s concerns in a way that wouldn’t too dramatically impact the Dolphins’ finances. He’d even have been OK with accelerating salary from 2024 to 2021 to align this year’s take-home with his production.

The rationale, we’re told? We’re not changing a contract with a bunch of years left on it.

But what they really meant is we’re not improving a contract with a bunch of years left on it.

Because just a few days before Howard went public with his frustration, the Dolphins did indeed change a contract not close to expiring. They convinced linebacker Bernardick McKinney to take a 61 percent pay cut in 2021 and lopped the last two years off his deal.

The accounting coup made far smaller waves nationally because it’s the way business has long been done in the NFL for years. The only money in a contract that’s guaranteed is the guaranteed money.

Everything else is largely irrelevant, to both the organization and the players. But perhaps that pendulum is swinging back toward equilibrium.

Are Xavien Howard and Aaron Rodgers foreshadowing a changing tide?

At roughly the same time Howard was leaving the field after practice, Aaron Rodgers was stepping to the podium in Green Bay. Rodgers used his first news conference in months to air his many grievances with an organization that, in his view, disrespected and underappreciated him.

In a way, Rodgers and Howard are allies on the front lines of the new labor war, one that’s fought not over money but over agency.

Perhaps they won’t win that war. While the Dolphins have reported already fielded calls from teams interested in a trade for Howard, Flores knows his playoff hopes largely depend on a stout defense. And the Dolphins’ defense without Howard will have a huge hole.

So it’s telling that Flores, even after Howard roasted the team very publicly just a few hours earlier, talked of reconciliation during an appearance on the Dolphins’ flagship radio station Wednesday.

“I think we just continue to have discussions with him, his representation, and keep the lines of communication open, continue having dialogue and, hopefully, work something out,” Flores said.

If by work something out, he means find a team that’s willing to surrender market value in a trade and give him more money, that would be a welcome development for Howard.

But if he means somehow convince Howard to play under his existing deal, we could be in for an interesting six months in Miami.