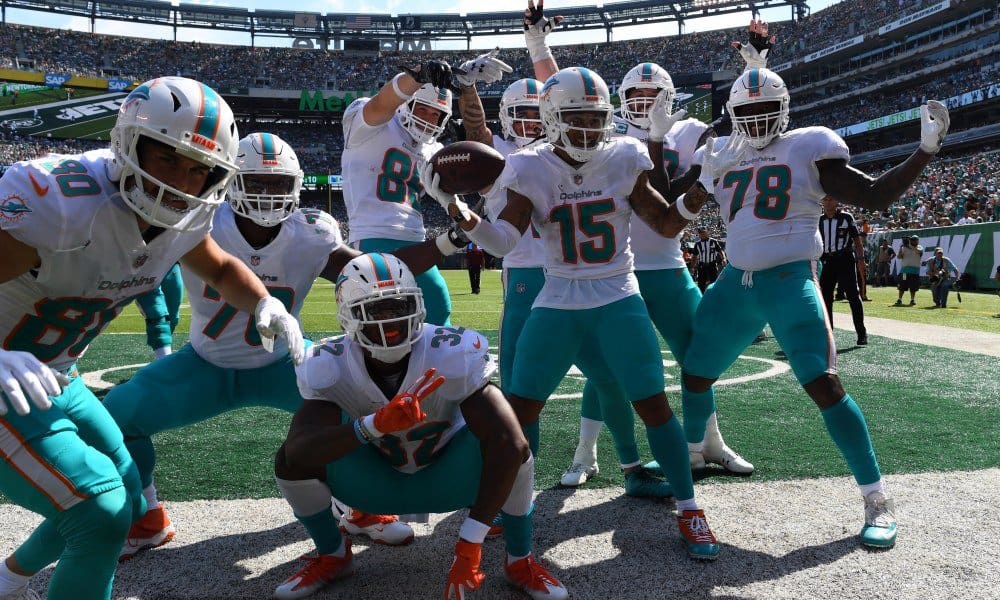 Much has been made of the Miami Dolphins wide receiver room over the past year, and just how good — or not good — it is. Opinions vary wildly, with some viewing the wide receiver room as ‘average-to-good’ while others view it as one of the worst in the league. What’s more clear-cut is that the group took a substantial hit this week. With both Albert Wilson and Allen Hurns opting out of the season due to virus concerns, what’s left of the Dolphins wide receivers for the 2020 season?

(Editor’s note: The Dolphins have signed free agent wide receiver Ricardo Louis since the publication of this article. Louis posted an “Elite” RAS of 9.23, with Elite explosion and Great size, Good speed, and Poor agility scores)

State of the Dolphins wide receivers in 2020

Who benefits from Albert Wilson’s opt-out?

Wilson and Hurns sitting out in 2020 will provide opportunities for guys who may not otherwise have had them. Who stands to gain the most from these decisions, and what do they bring to the table from an athletic standpoint? For the answer to that second question, we dive into their Relative Athletic Scores, or RAS.

The answer to the first question is two-fold. It’s a foregone conclusion now that DeVante Parker and Preston Williams are going to be the top two receivers on the team. Wilson’s departure leaves Miami with a battle for the WR3 spot — a battle that’s likely to come down to Jakeem Grant or Isaiah Ford.

Both Grant and Ford posted similar RAS grades, with just 0.76 separating the two. However, the two came about their scores in very different ways. In Grant, the Dolphins have a severely undersized receiver who is an absolute burner. Grant is the second-shortest wide receiver in the RAS database out of 1,500 receivers since 1987 and was in the bottom-50 in terms of weight at just 165 pounds. 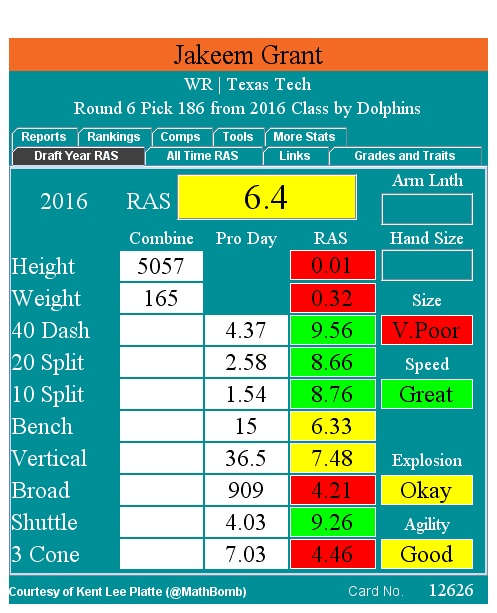 What Grant lacked in size he made up for in speed and agility. His times in the 40-yard dash and shuttle both scored above a 9 on the RAS scale. His 4.37 40 time put him solidly in the top 75 all-time, and his 4.03-second shuttle was good enough to place just inside the top 100 all-time at 98th overall.

Ford, on the other hand, comes about his RAS grade through better size than Grant, along with good explosion and agility marks. At 6’1” and 194 pounds, Ford isn’t the biggest receiver by any means, but it’s a significant size difference when compared to Grant. Ford also notched a significantly higher mark in the broad jump, putting up a 10’7” leap that gives him an “elite” mark in the test and boosts his overall agility scores to ”good”.

So who comes away as the winner of the battle? Though Grant has a better RAS score and likely has the upper hand in the competition in camp, Ford’s size may ultimately be the deciding factor. By the time the season rolls around, Ford will likely be seeing a significant increase in his playing time over last season.

Who benefits from Allen Hurns’ opt-out?

The answer to which of the Dolphins 2020 wide receivers benefits most from Hurns’ decision to opt out is a little murkier. In all likelihood, Hurns was never going to factor much into the Dolphins game plan on a week-to-week basis. Rather, he was a back-of-the-roster guy who would play a key role in maintaining the Dolphins depth at the position. That role is now going to fall, in all likelihood, to former Seahawks receiver Gary Jennings and a pair of undrafted free agents, Matt Cole and Kirk Merritt.

Merritt was unable to have a Pro Day due to the global health crisis, so we don’t have testing numbers for him. We do have them for Jennings and Cole, and Jennings has a significant advantage, notching an “elite” score in 2019.

Despite being just 6’1”, Jennings weighed in at 214 pounds and put up an impressive showing in the bench press. He was able to put up 20 reps of 225 pounds on his way to an overall “good” mark in the composite size. Explosion is where Jennings really made his mark. Both his vertical leap and his broad jump were over the 8.0 “great” threshold, and his 10’7” broad jump pushed into the “elite” category. He was also able to put up impressive speed numbers, scoring above 8.0 in both the 40-yard dash and his 10-yard split on his way to a 9.04 overall grade. 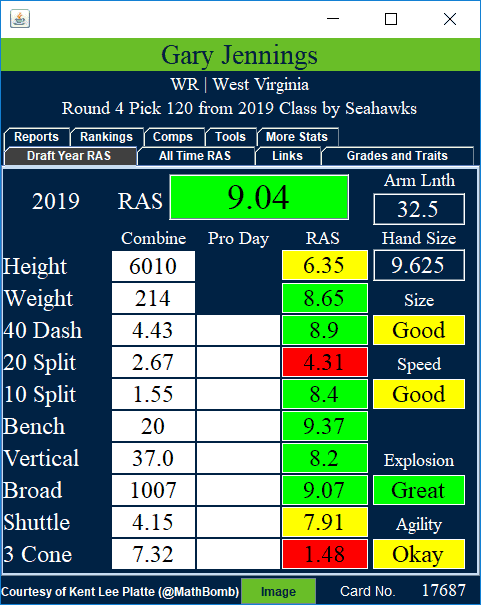 Cole, on the other hand, only comes in as a “good” athlete by his scores. He was able to put up great marks in both the speed and explosion categories, but he was severely hampered by his agility grade. This poor grade was “highlighted” by a particularly poor showing in the shuttle. His time of 4.65 garnered a 0.23 RAS grade and ranks Cole in the bottom 50 all-time out of 2,250 WRs in the database.

So who comes out on top in the battle for playing time and to be the “next man up” in case of injury or a positive virus test? Without the benefit of Merritt’s athletic testing, it’s hard to dub Jennings the best athlete of the group, but Merritt would have a tough time topping Jennings’ scores. Without much invested in any of the trio, it’ll come down to what head coach Brian Flores wants in a wide receiver. It’s likely Jennings will win that battle.

The wildcard in the Dolphins 2020 wide receiver room is 2020 NFL Draft 7th-round pick Malcolm Perry. A quarterback at Navy, Perry tested as a wide receiver at the 2020 NFL Combine. The Dolphins drafted him in the 7th round with the likely idea of adding him to the running back group to help bolster their anemic run offense. Running was a specialty of Perry’s at Navy, despite not having strong RAS numbers at the position. 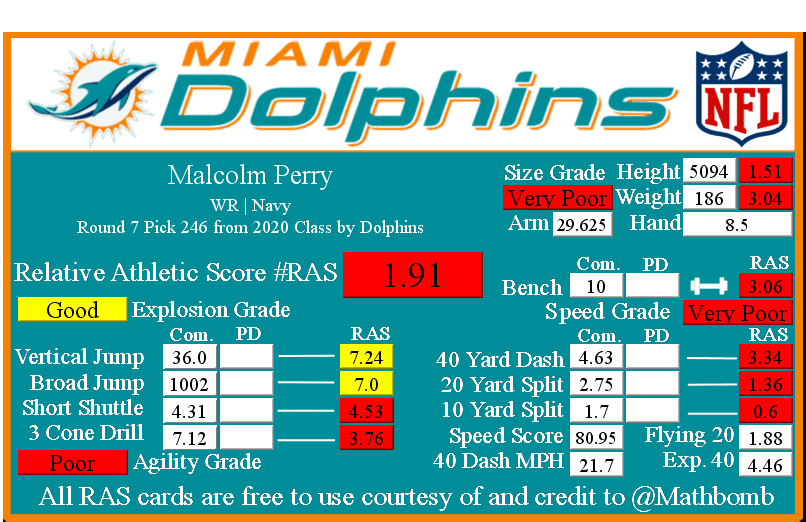 The team has been forced to change their tune a bit with these opt-outs, and are reportedly trying Perry out as a slot receiver. Unfortunately, Perry’s RAS numbers are even worse as a receiver than as a running back. Perry scored a “poor” 1.91 overall RAS grade, with his only “good” grade coming in the “explosion” category. Perry’s “size” and “speed” grades both came in as “very poor”, with “poor” agility marks as the final nail in his athletic coffin.