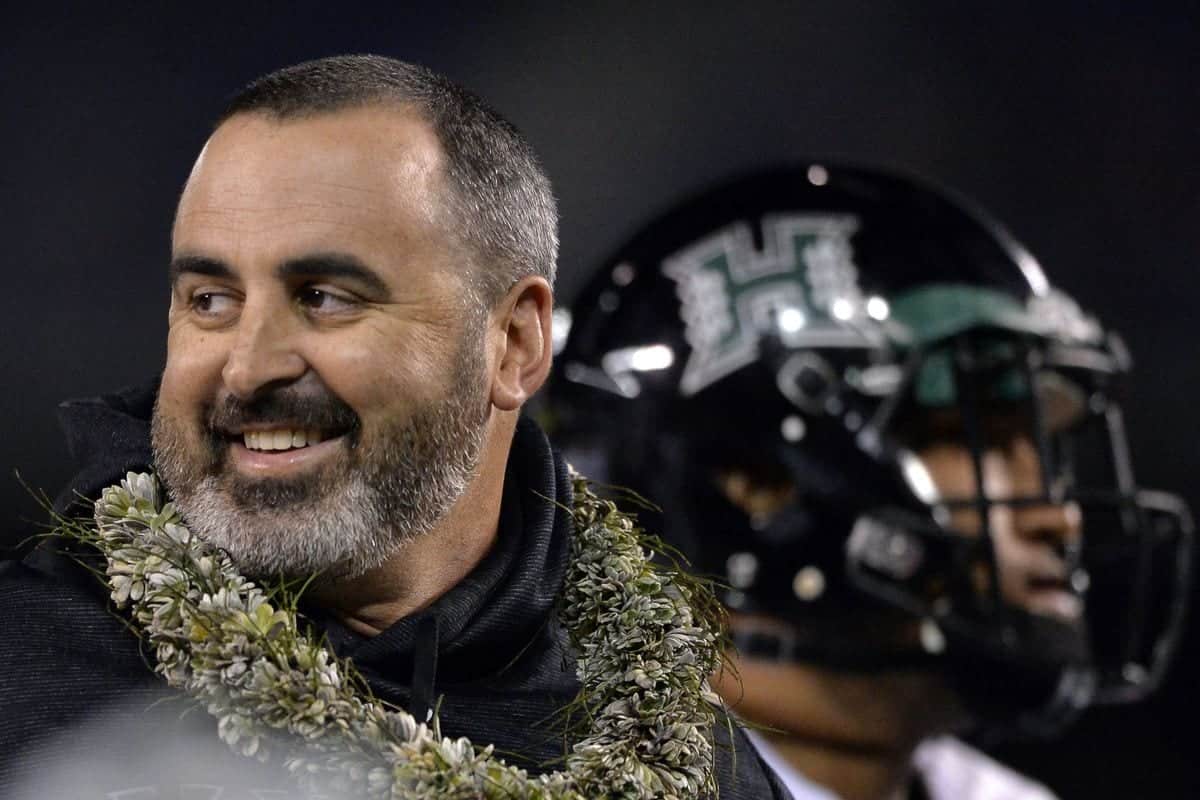 Mike Leach sent ripples through the college football landscape when he announced he was leaving the Washington State Cougars to go to the SEC and coach the Mississippi State Bulldogs. This left many fans wondering who could replace Leach’s offensive firepower, something that has virtually carried Washington State to relevancy in recent memory. An offense that has produced so much NFL talent, like Gardner Minshew.

The Washington State AD, sensing the desire to replicate or even improve the offense, went out and sought another offensive guru to replace Leach: Hawaii’s Nick Rolovich. Rolovich will bring his Run and Shoot offense to the Pac-12 to try and replace a coach whose eccentricities have captivated the college football world for years now. The hire of Rolovich for Washington State brings about a new era of offensive fireworks for the Cougars.

Rolovich has gone 28-27 over his tenure as the Hawaii coach. He is now 2-1 in bowl games after a successful Hawaii Bowl victory that capped off a 10-5 season in 2019. His continued success with the Run and Shoot propelled Hawaii to a top-5 finish in passing offense. He also turned Cole McDonald into an internet favorite due to his cannon arm and over the top daring throws. Now, Rolovich has to adapt that offense and bring it to Pullman, where the Air Raid has reigned supreme for many years. Luckily for Rolovich, Leach has an eye for talent and has brought in a lot of offensive firepower to his former team.

What’s the difference between the Run and Shoot and Leach’s Air Raid? Both put up points and both place heavy emphasis on the passing game. What is Rolovich going to do differently than Leach? There are a few things to note that I’ll explain here to help, from my limited experience covering and watching the two.

For starters, the biggest difference is how Rolovich values receivers. Under Leach, receivers ran a basic combination of routes and were taught simple reads based on the coverage. However, under Rolovich, the emphasis will be on the receivers more than ever under Leach. The Run and Shoot offense relies on the receivers making reads and adjustments based on the coverage, instead of just the quarterback. For both good and bad.

Take this diagram below as an example. This is Rip 60 X Choice, a staple of the Run and Shoot. 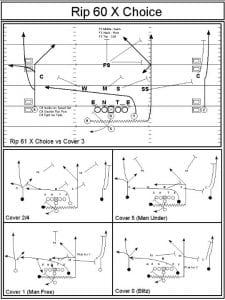 The “Choice” part of this refers to the ability of the receivers to adjust their routes based on what they read the coverage as. The “X” receiver runs either a speed out, deep post, or a vertical route based on their read of the alignment of the defense. Rolovich will oftentimes use motion to help the quarterback and receivers identify the coverage. This can be both good and bad. While it can create explosive plays, if the receiver and QB read two different things and fail to communicate properly, the quarterback could make mistakes. This often leads to turnovers (which adds context to McDonald’s turnovers this year). Rolovich places a lot of trust on his receivers and signal-caller to get it right on the field.

I expect Rolovich’s tenure at Washington State to start off a little slow, as it did in Hawaii. However, he has the tools to get in Wazzu that he didn’t have right away in Hawaii. The recruiting bonus of being a Power 5 team, along with his charismatic approach, should bring in more talented fits for his offense. He already has talented freshman quarterback Jayden de Laura, who is a natural fit for his offense over the other quarterbacks on the roster. As Laura develops within the system, Rolovich’s offense will continue to improve.

Rolovich’s first step at Washington State should be to bring in a new and outside defensive coordinator. The defense was a problem and often lost games for both Washington State and Hawaii this season. Who Rolovich brings in to fix and address the defense will be critical. Perhaps SDSU’s Rocky Long, who wants a P5 DC job? Gerald Alexander is a name I’ve often talked about due to the job he’s done as the secondary coach of the Cal Golden Bears. Alexander is part of a talented coaching tree and would be a great grab for the Cougars if they could lure him away.

Washington State’s hire of Rolovich was a step to bring in a new, fresh, and diverse offensive guru to the program. As Leach’s tenure went on, it felt like more and more like teams started to figure him out, this was apparent in Washington’s dominance of the Apple Cup. Rolovich has already proven he is willing to adapt and change his offense to fit his talent. If Rolovich can carry the offensive success from Hawaii to Washington State as well as fix the defensive woes for the Cougars, Wazzu will be back on track to being a top contender for the Pac-12 year in and year out.