The Buffalo Bills are one of the trendy teams heading into the 2020 NFL season, for many reasons. Tom Brady has moved on to Tampa Bay, leaving a void in the AFC East. They added one of the best wide receivers in the NFL after trading for Stefon Diggs. Josh Allen has become one of the most exciting — and polarizing — young QBs in the league. And last but not least, last year’s emergence of rookie running back Devin Singletary gives the Bills offense exciting upside for the future.

Singletary was the Bills’ third-round selection in the 2019 NFL Draft, out of Florida Atlantic. He saw limited action at the beginning of the season, as he was buried on the depth chart behind the legendary Frank Gore, along with suffering a hamstring injury in Week 2 that kept him sidelined for several weeks.

As the season drew on, Singletary began to make his mark, eventually finding his way to the starting lineup. By the time his season was done, Singletary had run his way to 775 yards and a 5.1 yards per carry average, tacking on two rushing touchdowns along the way.

Those aren’t earth-shattering numbers by any stretch of the imagination, but it’s a very solid start for a third-round, small-school running back. His 775 yards were the fourth-most by a rookie running back in 2019, behind only David Montgomery, Miles Sanders, and 2019 Offensive Rookie of the Year runner-up Josh Jacobs.

Now in year two, and with Gore out of the picture, the question becomes, “What is the outlook for Singletary going forward?” Will he be able to build upon his solid rookie season and become a quality running back in the NFL? A dive into his RAS and PFN OSM grades may help us find an answer.

Singletary according to RAS

Relative Athletic Score — or RAS — is a metric developed by Kent Lee Platte that allows us to put a prospect’s athletic testing numbers into context. It enables us to take what we know — a player’s 40-yard dash time, for instance — and put it into context with the rest of the players in his draft class. Further, we can take that same number and put it into a historical context to see how the prospect stacks up against players at his position from different draft classes.

Once we have that context, it allows us to set some standard benchmarks for performance at each position, and explore how athletic testing relates to reaching those benchmarks. For the running back position, we have two main benchmarks: 750 yards rushing in a season, and selection to the initial Pro Bowl roster. Devin Singletary came to the Bills in the 2019 NFL Draft after putting up a 1.72 RAS, which equates to a “very poor” score. What does that RAS tell us about Singletary and his chances of reaching the set running back benchmarks?

With a RAS of 1.72, Singletary is the fourth-lowest scorer to reach at least one of these benchmarks. The only running backs with a lower RAS to reach at least 750 yards in a season are John Settle (RAS of 0), Bernie Parmalee (RAS of 0.61), and Gary Brown (RAS of 0.88). From an athletic testing standpoint, the chances of Singletary replicating and building upon his success as a rookie seem to be slim. 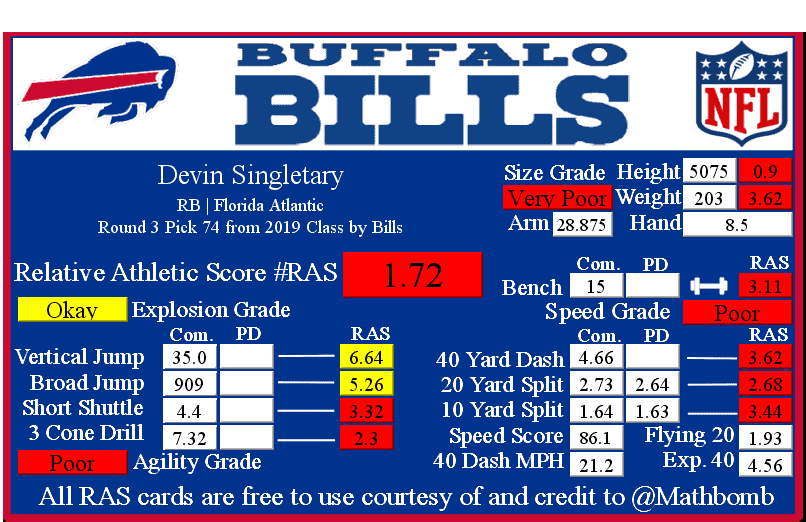 Athletic testing is only one piece of the puzzle. When you’re evaluating an NFL Draft prospect, RAS is a useful tool to help in your evaluation, but it shouldn’t be your entire evaluation. It’s essential to watch the film and get a feel for how a player’s RAS translates — or doesn’t — to his play on the field. Similarly, now that Singletary has put NFL tape out there for us to glean information from, and that should be the crux of our evaluation. That’s where PFN OSM comes into play.

Singletary according to PFN OSM

The RAS for Singletary can help us get an idea of what to expect from the Bills running back going forward, but it doesn’t paint the full picture for us. For that, we need to look at what Singletary was able to do as a rookie, and what that can tell us about what he may do for the Bills in year two, now that he’s the presumptive featured back.

To allow us to quantify a player’s on-the-field performance, Pro Football Network’s Chief Strategy Officer Brett Yarris has developed the Pro Football Network Offensive Share Metric, or PFN OSM. OSM takes into account only the player’s primary responsibility for any given play and how much he was responsible for gaining or losing yardage. For a running back, the primary responsibility is rushing, so the grade does not factor in Singletary’s receiving abilities.

The RAS for Singletary paints a somewhat grim picture with regards to Singletary’s chances at future success. The OSM grade for Singletary supports that outlook. For his efforts in the 2019 season, Singletary drew a 9.73. That grade landed him in the “poor” category and was the fifth-lowest score for all qualifying running backs on the season.

Furthermore, Singletary’s OSM grade of 9.73 would have put him in the bottom five running back grades for each of the seasons dating back to 2016. This tells us that while Singletary did find some success in 2019, it was primarily thanks to factors outside of his individual ability.

Neither the PFN OSM grade nor the RAS for Singletary should be interpreted as saying it’s impossible for him to find prolonged success as the featured back in Buffalo. RAS and OSM can give us context and help us analyze performance, but they can’t give us all of the answers all of the time. There are always going to be outliers, and Singletary may wind up being one.

However, the NFL is largely a game of risk management. With all of the tools we have at our disposal to analyze Singletary’s performance, it would be a risky bet to count on him to be overly productive. It’s more likely that Singletary winds up being part of a running back by committee-style offense in Buffalo where he is supplemented with another young back sooner rather than later.