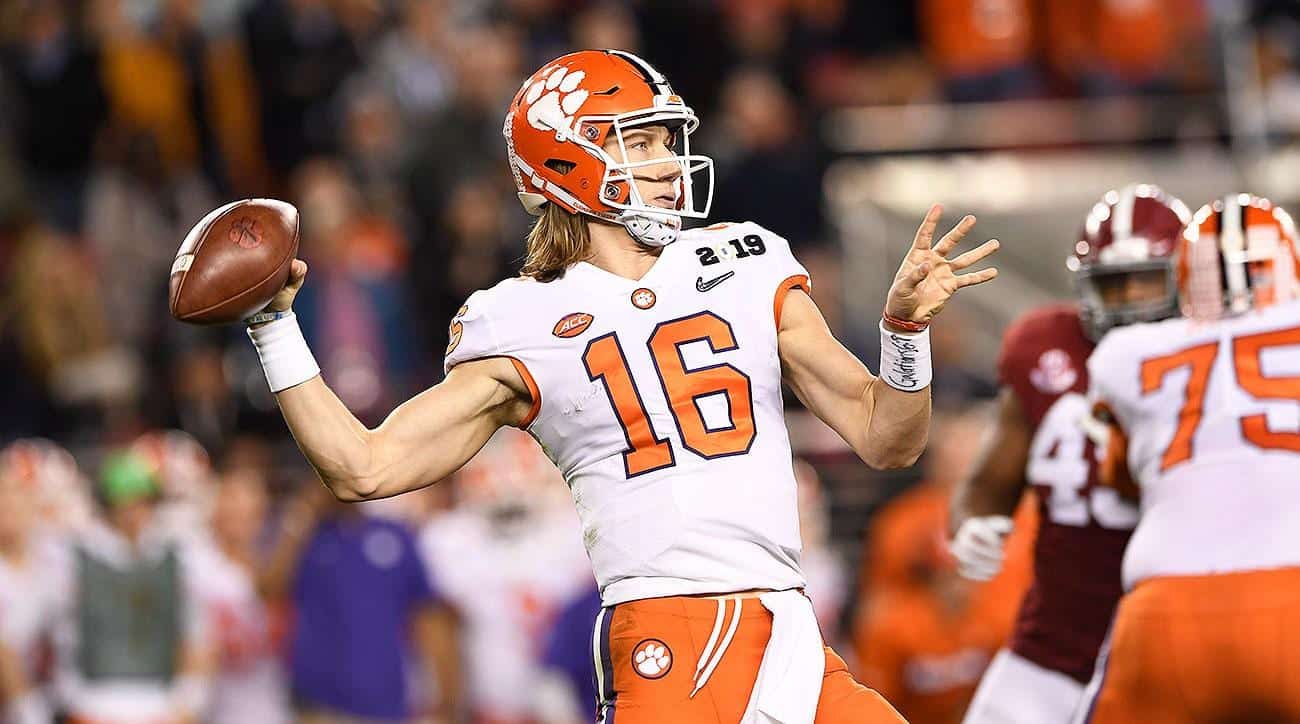 With Week 14 already in full gear, the final Saturday of the college football regular season features a packed schedule of substantial devy fantasy football matchups. With only conference championships and bowl games remaining after Week 14, this is the final time for some prospects to improve their NFL Draft and devy stock.

The night slate features Heisman-favorite Joe Burrow and LSU hosting SEC West foe Texas A&M and Oklahoma heading to Stillwater to take on Oklahoma State in the annual Bedlam Series. With Laviska Shenault Jr. and Zack Moss squaring off in Provo, Colorado, visiting Utah is another underrated devy matchup to watch in Week 14.

With Week 13 of the college football season in the books, here’s a look at the best devy fantasy football matchups to watch in Week 14. You can also take a look at my weekly stock report from the previous week.

Clemson’s offense is led by quarterback Trevor Lawrence, the likely #1 overall pick in the 2021 NFL Draft. After some early-season struggles with forced interceptions, Lawrence has leveled his play down the stretch as he’s now gone four consecutive games without a pick. The Cartersville, Georgia native has a 27-8 TD/INT ratio on the season while quietly adding 300 rushing yards and seven touchdowns on the ground.

While there’s sure to be a debate next season between Ohio State’s Justin Fields and Lawrence as the #1 overall pick, there’s no doubt in my mind that Lawrence is the best quarterback prospect in college football. That being said, I could see the benefit of Fields’ rushing ability swaying plenty of people when choosing between the two in devy drafts.

Clemson’s rushing attack is led by my #1 ranked player in my mid-season 2020 dynasty rookie rankings, Travis Etienne. While you won’t see Etienne making many people miss in the open field, he usually doesn’t need it to be successful. Etienne’s game relies on blazing speed and surprising power that makes the running back near-impossible to bring down in one-on-one situations.

Clemson’s receiving corps is led by future draft picks in the upcoming 2020 NFL Draft down to true freshman with the ability to get selected high in the 2022 NFL Draft. Tee Higgins and Justyn Ross are the Tigers’ two known commodities. Still, Amari Rodgers has been a steady return/slot specialist for the defending champions while freshmen Frank Ladson and Joe Ngata are future stars at WRU.

South Carolina wide receiver Bryan Edwards is one of my favorite WR prospects to watch in college football. Even with the struggles at South Carolina, Edwards finds a way to win his matchup every single week.

With the 2020 NFL Draft extremely deep at wide receiver, the stock of players like Edwards will be one of the most intriguing storylines of draft season. The South Carolina wide receiver would likely get selected in the second-round pick at the very minimum in most drafts, but the depth of this year’s class could lead to someone like Edwards falling into someone’s lap at an extreme value. Those are the situations you want to take advantage of in dynasty rookie drafts.

Outside of Edwards, there isn’t a whole lot of devy value on the South Carolina roster. I liked Shi Smith’s potential last season, but he’s so far disappointed in 2019 with only 449 receiving yards and two touchdowns. Tight end Kyle Markway has some talent and could be an NFL prospect, but it’s hard to tell in the Gamecocks offense.

The Gamecocks’ rushing attack is a committee approach led by Clemson-transfer Tavien Feaster and Rico Dowdle. Feaster, injured against Vanderbilt, is questionable but expected to play against his former teammates.

The Alabama Crimson Tide will get their first true test of life without Tua Tagovailoa when they visit rival Auburn in the 84th installment of the Iron Bowl. Luckily for quarterback Mac Jones, there’s plenty of weapons on Alabama’s team to get the ball to.

Alabama features the single most impressive wide receiver group in all of college football. Jerry Jeudy has long been considered the #1 WR in the 2020 NFL Draft, but Henry Ruggs III and Devonta Smith have both seen their stocks skyrocket over the past season. Ruggs III is a burner with the ability to take the top off of defenses, while Smith leads the Crimson Tide in both receiving yards and touchdowns with career-highs in each category.

Alabama Najee Harris is a powerful back with surprising quickness in and out of cuts. While Harris is a step below the top three running backs in the 2020 NFL Draft, you can certainly make a case for him in Tier Two, along with J.K. Dobbins and Cam Akers.

Wide receiver Seth Williams has been the most consistent devy prospect on the Auburn football team. The fact that their top wide receiver only has 735 receiving yards should tell you everything you need to know about this Auburn offense.

Freshman quarterback Bo Nix has struggled with his accuracy all season while running back JaTarvious Whitlow has suffered through an injury-plagued sophomore season. One bright spot for the Tigers has been the play of freshman D.J. Williams in Whitlow’s absence. Williams has so far looked like a running back worth keeping an eye on in future NFL drafts.

Wisconsin running back Jonathan Taylor is one of the highest-ranked devy prospects in college football. Outside of the sensational Taylor, there isn’t much else to like on this Badgers offense.

Top pass-catchers Jake Ferguson and Quintez Cephus haven’t made much of a difference this year in Wisconsin’s awful aerial attack while quarterback Jack Coan is a downright detriment to the team.

Minnesota features one of the best wide receiver duos in college football in Tyler Johnson and Rashod Bateman. Johnson has been on devy draft radars for years, while Bateman has exploded in 2019 to the point that he’s now regarded as a top 2021 NFL Draft prospect.

Johnson has been a tremendous college football player that no doubt has fans in the devy community, but there has to be some concern with his game translating to the next level. Johnson isn’t a very explosive player on film, but the wide receiver wins with precise route-running and the ability to make contested catches when he doesn’t have the speed to separate from defenders.

While I’ve always loved Johnson as a prospect, dynasty leaguers should be worried that the wide receiver recently accepted a Shrine Bowl invitation instead of the expected Senior Bowl invite. Maybe that speaks to the depth of the position in the 2020 NFL Draft, but it has to make devy drafters a bit hesitant of investing an early pick in the talented wide receiver.

Rodney Smith has been the most productive running back in the Gophers backfield, with the senior recently accepting a Shrine Bowl invitation. After rushing for over 1,000 yards as a freshman a season ago, Mohamed Ibrahim has mostly disappointed with less than 500 rushing yards all season.

Oklahoma’s Jalen Hurts has struggled with his passing accuracy down the stretch of the 2019 season. Still, the quarterback has remained dangerous on the ground with over 1,000 rushing yards and 17 rushing touchdowns on the season. Hurts now has 47 total touchdowns on the season with only six interceptions, but there are questions about the quarterback’s game translating to the National Football League.

Hurts’ rushing ability is excellent for the quarterback’s stats, but it’s hurt the Oklahoma running backs all season long. With both Trey Sermon and Kennedy Brooks healthy, neither running back received more than 15 carries all season. Since Sermon was lost to a season-ending injury to Iowa State, Brooks’ volume has increased with over 19 carries per contest.

CeeDee Lamb is one of the top wide receiver prospects in the 2020 NFL Draft, while Charleston Rambo is a burner with the chance to stick on an NFL roster. Lamb is right up there with Jeudy in the 2020 WR rankings, and there’s even some belief that the Oklahoma wide receiver has leapfrogged the Alabama star this season.

For the majority of the 2019 season, Oklahoma State featured the best RB/WR pair in all of college football. At one point, running back, Chuba Hubbard and wide receiver Tylan Wallace led the nation in both rushing and receiving yards.

Unfortunately, Wallace suffered a torn ACL during a late-October practice that saw the talented wide receiver ruled out for the remainder of the season. In Wallace’s absence, wide receiver Dillon Sanders has become Spencer Sanders’ top target while the Cowboys are also getting Hubbard involved in the passing game.

Hubbard has been one of the best running backs in college football all season, but his recent passing game prowess has devy drafters drooling. Hubbard had a career-high seven receptions for 88 yards in the Cowboys 20-13 victory over West Virginia.

While Hubbard is one of the best runners in college football, the inexperienced back struggles in pass protection. Even with Hubbard eligible for the 2020 NFL Draft, the redshirt sophomore might be better served fine-tuning his game with another year in college. The upcoming draft is also extremely deep at the running back position, while the 2021 Draft doesn’t have a locked-in #1 devy RB yet.