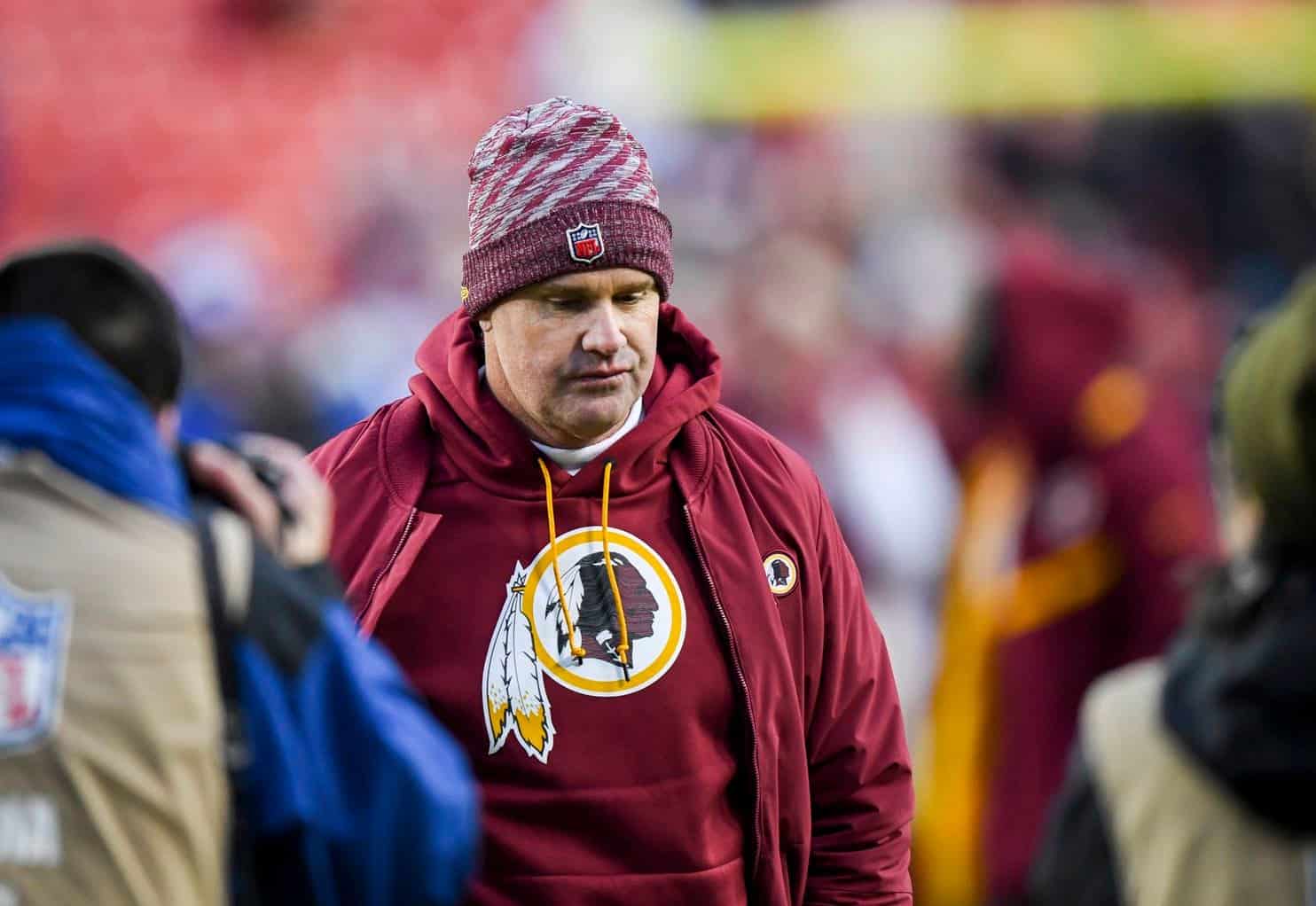 Photo Credit: The Washington Post
What's in this article? Click to show
The Washington Redskins certainly have a huge hole at quarterback. But trading up in the first round of the NFL Draft to select a quarterback isn’t the right move for this franchise.
They just traded for Case Keenum
They made the same mistake before
Jay Gruden is on the hot seat
A day two selection may be the right fit
Chosen Rosen?

The Washington Redskins certainly have a huge hole at quarterback. But trading up in the first round of the NFL Draft to select a quarterback isn’t the right move for this franchise.

When Jay Gruden took over the Washington Redskins back in 2014, he carried plenty of promise. Owning the known last name was a part of the appeal, but Gruden coached a quality offense with the Cincinnati Bengals. He navigated the post-Robert Griffin III era and managed with Kirk Cousins, and never broke the franchise into post season success. Fast forward to now, Washington seems to be in the same place. After finishing 7-9, Gruden and company finished third in the division. Quarterback Alex Smith, whom the team traded for last year, was lost to a severe leg break that he continues to rehab. The team has lost weapon Jamison Crowder and pass-rusher Preston Smith. Although adding Landon Collins could be a boost to the secondary, the team still lacks talent.

The most glaring hole, however, is clearly under center. Smith’s injury was undoubtedly an unpleasant surprise, as the Redskins hoped he’d bring stability to the position. It may have worked for half the year, but Washington couldn’t help but falter after Smith’s injury. Now, some have tied Washington to a potential trade up for a QB in this year’s draft.

It’s possible, yes, but in my opinion, it isn’t the right move.

Despite a history of mistakes in past decision making, here’s why I don’t see them trading future draft capital to move up.

They just traded for Case Keenum

Due to Smith’s seeming extended recovery from his leg injury, Washington decided to trade for QB Case Keenum, taking him off the hands of the Denver Broncos. If anything, Keenum was a letdown for Denver, but he didn’t fit the vertical offense they ran. He does have established success with more West Coast heavy, play action concepts, which Washington featured last season as they leaned on Adrian Peterson’s durability. Last year’s second-round selection Derrius Guice is also slated to play after recovering from a torn ACL. Having a two-pronged attack featuring two quality backs will ease the passing game and demands from Keenum.

Keenum is a quality backup that provides Colt McCoy some competition and the team some insurance. However, he may be more likely to start considering McCoy is still recovering from a leg injury like Smith.

Colt McCoy, who’s been spotted on crutches, did indeed have another surgery on his right leg, which he broke in December. The procedure was more of the “preventative maintenance” sort, I’m told, and he’s expected to be ready when the #Redskins’ offseason program begins.

Moving draft capital for a journeyman is not ideal if you want to trade more capital to grab another younger QB. It wouldn’t make any sense to invest even more picks on two players, one of whom is an established bridge player that may not be around after 2019, and the other untested. Sure, the pick was only a 2020 sixth-round choice, but they would lose premium picks moving up.

Keenum may not be the answer, but skipping out on the QB sweepstakes in the first round would be ideal to avoid overspending.

They made the same mistake before

Remember the trade Washington made to move up and select Robert Griffin III in 2012? As previously mentioned, Griffin flamed out quickly, but what’s lost in the conversation is the capital used to move up. Washington traded three total first round picks and a second rounder for the number two pick that year. Griffin prevented the Redskins from building the entire roster, which was littered with holes still. Years later, the Redskins are still paying for this mistake.

Why would Washington make that same investment? Why make such a drastic trade for the chance at a rookie without guaranteed results? Especially in a draft class that features only a handful of clear franchise signal callers. Washington would have to trade up, yet compete with the likes of several other teams bidding for one of the rookie passers too. Would they have to move to the twelfth pick? The ninth? The fifth? Making a move like this only compounds the attempts at building the entire team up. They no doubt would have to give up a haul for only one player.

While Dan Snyder isn’t shy about adding players with name fame to sell tickets (see Albert Haynesworth), he ideally shouldn’t sacrifice the entire roster’s potential to do the same thing he approved of when Griffin was acquired.

Jay Gruden is on the hot seat

After finishing 7-9, Gruden is at a record of 35-44-1 in Washington. That will not cut it in a division like the NFC East that’s been routinely up for grabs every year. While the injuries on the roster may have given some leeway, Gruden is in a weak position to do anything. The team has holes to fill – not only under center – but at almost every spot on the roster.

Ideally, the team shouldn’t try moving up when their head coach is likely on the way out, barring a miracle playoff berth. Grabbing a future franchise QB and then scrapping the coaching staff and scheme isn’t completely nonsensical. However, trading up from pick fifteen to the top five or ten would be yet another poor decision.

Gruden has a quality offensive mind, so getting him a passer that he likes would be the best thing. However, he may have to deal with Keenum because they effectively played themselves out of position for a real starting-caliber player. Considering the lack of depth at quarterback, they’re better off taking a flier on a passer later. Gruden will have to work with whatever is on the roster come training camp.

A day two selection may be the right fit

To attempt at filling the void while building the entire team, Washington would need to draft a passer after the day one selections end. Unless a top QB slides, this is the only logical solution.

Grier has been a mixed bag in terms of reviews from analysts. He brings the resume of stats, starting experience, and accurate arm on short passes to fit Gruden’s style. He’s a quality deep ball passer that relies on receivers who can contest for the catch. Josh Doctson has that ability, and the team could easily draft receiver help in the later rounds.

In my review of Grier, he reminded me a lot of Andy Dalton, a guy Jay Gruden has much experience coaching. Similar to Dalton, Grier relied on his top receiver in David Sills V, as Sills accounted for over 40% of Grier’s career passing touchdowns. Dalton does the same with AJ Green. Grier operates with accuracy, doesn’t have the biggest arm, but is relatively smooth when the pocket is clean. He has enough mobility to extend plays, but pressure from a pass rush will wreck his confidence. Same for Dalton.

Gruden has also met with Grier ahead of his pro day, according to Redskins Wire. While Gruden will likely speak with all of the top prospects, it shows the interest is plausible. Washington could decide to select Grier at their original spot of pick 15, or they could trade back, gather more picks to build the roster, and then add Grier. There’s also a chance he lasts until the second or third round.

Another potential candidate is Josh Rosen, who has been frequently floated around as a possible trade candidate as the Arizona Cardinals are reportedly hot for rookie Kyler Murray. It would only take a day two pick as some sources suggest, so Washington, again, wouldn’t be inclined to mortgage their future to fill the QB hole. Rosen is a young, ascendant passer who some considered the best QB of last year’s class. Fetching him for a second or a third pick would add their future signal caller on an affordable deal, while simultaneously adding the best available player to stock up on talent at other positions. To read more by PFN on why the Washington Redskins should trade for Rosen, click here.

Ultimately, Washington is in dire need of establishing consistency. They have had promising talent in recent years, but too many expenditures in free agency, injuries, and subpar play at quarterback have held them back substantially. It is unknown what their plan is, but giving up the farm for a young passer shouldn’t be it.