PRO FOOTBALL NETWORKThe NFL is fast. PFN is faster.
More
Facebook
Twitter
ReddIt
Linkedin
Email
What's in this article? Click to show
Offensive value by skill position
Value of quarterbacks and receivers over time
Why is quarterback value dropping?
Why is receiver value increasing?
Is there a changing of the guard, in terms of positional value?
A tale of two seasons?
What does that tell us about a receiver’s value?

Often, both the heroes and the G.O.A.T.S in the NFL are the quarterbacks. Everything runs through them. The good, the bad, and everything in between. Fans and analysts alike put so much value on that position over others, like wide receivers and running backs, that quarterbacks are often the first line of defense in supporting or rejecting a team’s success, or lack thereof.

Dynasties tend to revolve around the quarterback (e.g. New England) and teams rebuilding seem to focus primarily on the quarterback (e.g. Miami Dolphins). But why are they considered so valuable, and should they be? Value is subjective, is it not? Lucky for us, PFN’S Offensive Share Metric (OSM) provides an objective and scientific approach to indicate value based on behavior.

If you’ve been following PFN, you’ve likely seen OSM discussed in many of our articles. Perhaps you’ve checked out the OSM database, which now dates back to the 2016 season. Maybe you saw that pass-catchers tend to have higher grades than quarterbacks and running backs.

That is not a fluke. Think about the primary responsibilities of a targeted receiver – run a route, create separation, catch the ball, and gain yards. How much do they need to rely on others to do that? To some degree they do, but the majority of a receiver’s ability is dependent on the individual, which is where behavior drives value.

Compare that to a quarterback who is also relying on the rest of the team for things like protection, time to throw, the ability to separate, etc. And then compare that to a running back who needs additional blocking to get to the line of scrimmage and beyond as well. Running backs also tend to gain fewer yards per play on average.

Since receivers are inherently more responsible for adding value to a team, wouldn’t that indicate they should be considered more valuable overall, even in comparison to quarterbacks? Before we jump to that conclusion, let’s take a look at some of the numbers.

Value of quarterbacks and receivers over time

Why is quarterback value dropping?

While there are many contributing factors, we can refer to the NFL’s Next Gen Stats for some insight. Over the past four seasons, we’ve seen the quarterback’s average time to throw steadily increase from 2.64 seconds to 2.78.

That may not seem like a huge variance, but pair that with roughly a 3% decline in aggression rate during that same time-frame, which measures how often a quarterback throws into tight coverage, and it becomes obvious why the value of a quarterback is on the decline – they have more time to throw yet are throwing safer passes.

Why is receiver value increasing?

As noted earlier, where quarterbacks rely heavily on others to obtain results, a receiver’s value is more independent of their own abilities and behaviors. It’s also not surprising there’s a direct correlation between the decline in a quarterback’s aggression when a receiver is able to separate more.

Is there a changing of the guard, in terms of positional value?

There’s obviously been a huge swing over the past few years. Not just in averages but in the numbers as well. Take a look at OSM values in 2016 by offensive skill position.

Running backs have the largest range of OSM scores, whereas wide receivers, tight ends, and quarterbacks tend to be a little more clustered together. Also, take a look at how the clusters of quarterbacks aren’t too far off that of the receivers.

There’s an obvious downward shift for quarterbacks, with most between 17 and 23 for an OSM score. Also, take a look at how much the wide receivers cluster narrowed and grew upwards. Receivers not only added more value than quarterbacks but at a more consistent rate as well.

A tale of two seasons?

Now, let’s take a look at OSM values of quarterbacks during the regular season compared to the post-season. After all, there’s often an assumption that quarterbacks make or break a team’s ability to make the playoffs.

However, over the past four seasons, the average quarterback value has decreased week-over-week, while receiver value has remained relatively constant.

So, does that mean a consistent group of receivers will help a team make the playoffs more than their quarterback counterpart?

Perhaps. But look at what happens once the playoffs start.

Quarterback value dramatically increases when the stakes are higher. And the quarterback is seemingly providing a significantly higher than normal value to their team, culminating with the Super Bowl. The value of a quarterback is most apparent in the post-season.

Take a look at the OSM scores for quarterbacks and receivers during the 2016 NFL Playoffs.

There’s a drastic increase in value for the quarterbacks in Super Bowl LI – Tom Brady and Matt Ryan. Although the Falcons squandered a 28-3 lead, Matt Ryan had an OSM of 59.43 in that game, which is the sixth-best single-game performance of any quarterback over the past four seasons, not to mention the best in any Super Bowl during that time.

While attempting just 23 passes in the game, in many ways Ryan had the best Super Bowl performance of any quarterback as far back as we can go with the NFL’s Next Gen Stats – completed air yards, intended air yards, aggression rate, completion %, and variance to expected completion % have never been higher in a Super Bowl since.

If most of the post-season trend relates to 2016 and Super Bowl LI, does that mean the value of the quarterback is declining in both the regular season and post-season?

Based on the above, that appears to be true. Even during the playoffs, quarterbacks have gradually become less valuable as of late.

What does that tell us about a receiver’s value?

Over the past four seasons, while the quarterback’s value has decreased, the receiver’s value has (at worst) stayed consistent. Additionally, a receiver’s value has become more predictable as the OSM range has narrowed over time. And, we’ve found that there’s not necessarily an increase in value when comparing regular season OSM versus post-season.

Does that mean a receiver has become more valuable than a quarterback?

Over the next few weeks and months, Pro Football Network and The Behavior Movement will be rolling out the next proprietary grading system that addresses just this – the Offensive Value Score, otherwise known as OVS. While OSM tells you how the performer did, OVS will be able to tell us how valuable the performance was.

Jeff Neill is the contributing Director of OSM Analytics as well as the PFN Outreach Coordinator. You can follow Jeff on Twitter @JeffNeill13. 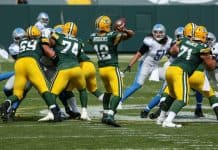 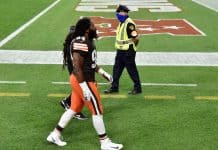