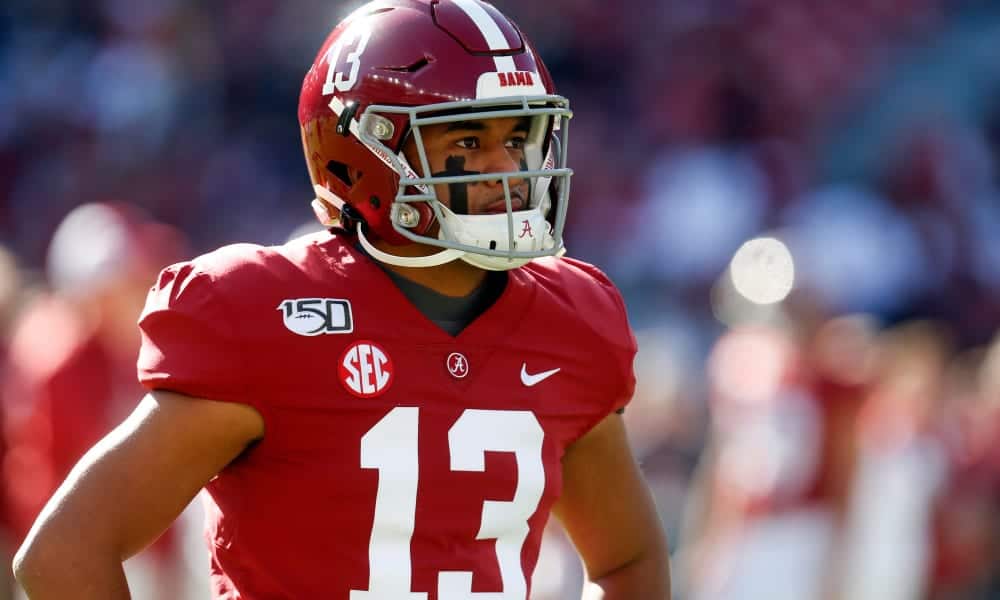 There have not been many questions regarding Alabama Crimson Tide quarterback Tua Tagovailoa and his intention to enter the 2020 NFL Draft. A highly accomplished junior and the projected number one pick in the draft entering the 2019 college football season, many had just assumed that he would declare. However, after suffering a dislocated hip against Mississippi State, fans, analysts, and media personalities began to weigh the pros and cons of him returning to school for another season.

Those who say he should return to Alabama cite the fact that there will be many questions about the severity of his injury and whether he can regain his form. They say his draft stock is falling and if he wants to be the top selection in the NFL Draft, he should go back and prove to everyone that he can still play at an elite level.

Those who say he should enter the draft cite the fact that he has played for free long enough. With three different surgeries in three years, why risk getting seriously injured again and perhaps see your chances in the NFL diminish? They also cite the fact that Tagovailoa likely had an insurance policy to protect against this type of injury so regardless of where he lands in the draft, he will receive money to offset his financial loss.

Update: The Action Network reported on November 22 that Tagovailoa does not have an insurance policy to cover a fall in the draft.

The insurance provided to him by the University of Alabama did not include a loss-of-value policy. That means he will not be able to recoup millions of dollars in potential losses if he falls from the possible No. 1 overall pick in the 2020 NFL draft to, say, the mid-first round, which some prognosticators are expecting.

Tagovailoa, sources said, decided to only take the coverage that Alabama gave to him. Tua’s coverage entitles him to collect if doctors rule he can never play again, as the school purchased permanent total disability insurance for the QB. It’s important to note that Tagovailoa opting to take the school’s policy did not prohibit him to taking out loss-of-value insurance on his own dime.

With each side seemingly trying to convince others (and perhaps Tagovailoa himself) of their stance, it might be time to put that debate to rest. That’s because on this week’s episode of NFL Draft Insiders, PFN Draft Analyst and Insider Tony Pauline said that he’s hearing Tagovailoa has every intention of entering the 2020 NFL Draft.

“I am told by people who are close to him [Tagovailoa] that Tagovailoa is telling people that he is very likely to enter the 2020 NFL Draft. This shouldn’t be a surprise – maybe it’s just an affirmation to some people. But I think right now, the chances of him returning to Alabama, from what I’m hearing from people close to him, are very, very slim.”

You can listen to the full discussion around Tagovailoa by clicking here or tuning into the player below. The discussion begins at the 23:47 mark and continues through 35:20.

As with anything, decisions can change but with a full recovery expected, it seems unlikely that Tagovailoa will reverse course. Instead, he will set out to prove that he can continue to play at an elite level despite the hip injury, which he can start doing in about three to four months. In the interim, teams will get an up-close look at him at the 2020 NFL Combine in February. Leading up to that point, Pauline stressed the importance of patience.

“Everybody wants answers about his injury now – you’re not going to get them for a long time. We heard the surgery was successful. That’s successful by the surgeon’s standards. But is it good enough for NFL teams and their standards? There’s going to be plenty of speculation and talk. It doesn’t matter until he gets to the NFL Combine medical exams because Combine medicals are a different beast altogether and they vary by team.

We’ll have a better, clearer picture once the teams conduct their medical exams. After that, maybe some leaks will come out. His doctors can say now that everything is going to be OK but until the team doctors look at the hip, the X-Rays, do their diagnosis, and then give their opinions to the scouting staff and general manager – nothing matters.”

Tagovailoa will be highly scrutinized this offseason with his medical history taking center stage. If this is truly the end of his college career, he’ll finish 7,442 yards passing, 87 touchdowns, and 11 interceptions. His storied college career also includes numerous awards, including the Maxwell Award, Davey O’Brien, Walter Camp, Manning, and Sporting News CFB Player of the Year.

Tagovailoa was a finalist for the 2018 Heisman Trophy Award but fell short to Dwayne Haskins and winner Kyler Murray. This season, he was going up against stiff competition against the likes of Joe Burrow and Chase Young.

Be sure to stay tuned to Pro Football Network throughout the year as we’ll bring you all the latest news, rumors, and inside information from the college football and NFL world.