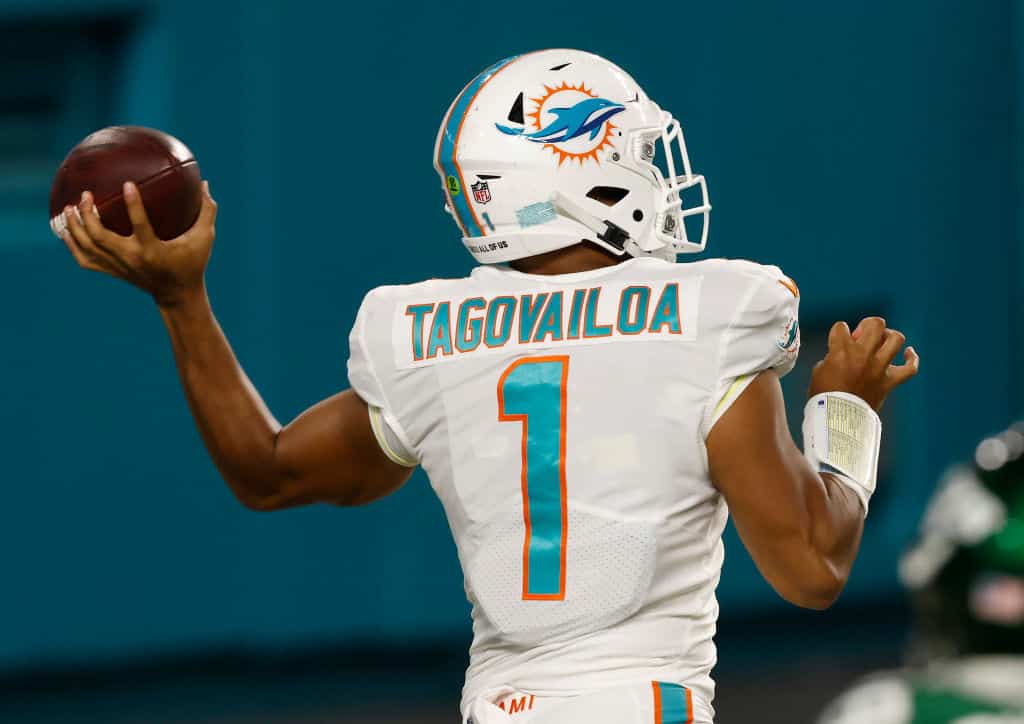 MIAMI GARDENS, FLORIDA - OCTOBER 18: Quarterback Tua Tagovailoa #1 of the Miami Dolphins makes his first completed pass during the second half of their game against the New York Jets at Hard Rock Stadium on October 18, 2020 in Miami Gardens, Florida. (Photo by Michael Reaves/Getty Images)
What's in this article? Click to show
Ryan Fitzpatrick’s production will be tough to replace
Should fantasy GMs and others around the league be surprised that Tua Tagovailoa was named the starting QB this early?
Tua Tagovailoa’s immediate fantasy football and NFL future
More fantasy football coverage at Pro Football Network

The Miami Dolphins long national nightmare is over… they finally have their franchise quarterback under center. With 2020 first-round pick Tua Tagovailoa taking over as starting quarterback following Miami’s Week 7 bye week against the Los Angeles Rams, what impact will the quarterback change have on the Miami Dolphins offense in fantasy football?

Along with breaking down Tua Tagovailoa as a prospect, we’ll also take a look at the fantasy production he is replacing in Miami. With veteran Ryan Fitzpatrick quietly having a QB1 fantasy season, his benching comes as a bit of a surprise in the fantasy football industry. For those fantasy teams now scrambling to replace their benched QB1, is Tua Tagovailoa an option worth picking up? Let’s take a look.

Ryan Fitzpatrick’s production will be tough to replace

And not only is Fitzpatrick QB8 on the season, but he’s also been able to enhance his teammate’s fantasy production. Running back Myles Gaskin (RB16), wide receiver DeVante Parker (WR26), and tight end Mike Gesicki (TE11) have all been consistent fantasy starters this season with Fitzpatrick under center.

Dishing the ball to his teammates has Fitzpatrick with 119.9 fantasy points on the season vs. a projected 104.3 points. That 15% increase in production is good enough for QB12 in Pro Football Network’s Fantasy Point Differential.

But while his overall points are high, Fitzpatrick’s 6.78 Consistency Score this season has been worrisome for fantasy players looking for a consistent QB1. Fitzpatrick’s tendency to follow up boom weeks with below-average outputs has always made him a risky fantasy quarterback.

This is likely a reason why the Dolphins are inserting Tua Tagovailoa into their lineup, and a reason why fantasy GMs should take notice. If Fitzpatrick was able to turn Gaskin, Parker, and Gesicki into somewhat reliable fantasy options, you would assume that Tua Tagovailoa can elevate their level of play. After all, he is one of the most highly touted quarterbacks to come out of the college football ranks.

Should fantasy GMs and others around the league be surprised that Tua Tagovailoa was named the starting QB this early?

Despite Fitzpatrick’s gaudy 2020 numbers, no one should be particularly surprised by his benching. By all accounts, Fitzpatrick was keeping the seat warm until Tua was ready. However, the timing seems a bit off with the Dolphins playing relatively good football.

But sources had privately told Pro Football Network in the past few weeks that Tua was much further along than anyone in Miami was letting on. And while the initial plan was to make the switch during the Dolphins’ original bye week in Week 11 before their schedule changed, a source told NFL Network’s Tom Pelissero that “it’s just time.”

And so when you look at the whole picture, it makes sense for the Dolphins to use their bye week as extra time to get their franchise quarterback ready for his first start. This is especially true with Tua getting his first game action last week against the Jets.

Before a scary hip injury pushed the quarterback down to No. 5 overall in the 2020 NFL Draft, Tua was seen as an elite can’t-miss prospect. Despite the injury and Joe Burrow’s emergence, Tagovailoa remained QB1 on several evaluators’ boards, including Pro Football Network’s Chief Draft Analyst Tony Pauline.

Armed with a quick release and an above-average arm, Tua has every tool necessary to be an elite quarterback in real-life and fantasy football. He completed 69.3% of his passes at Alabama, while the quarterback finished his collegiate career with an absurd 87-11 TD/INT ratio.

There will certainly be some growing pains on his journey as a first-year NFL starter, but there’s no reason to believe Tua Tagovailoa will hinder your fantasy teams moving forward. Even if you consider Tua nothing more than a speculative add, he’s not going to be bad enough to tank your teams. In fact, he could be a tremendous asset.

The Dolphins will continue to feature Parker, Gesicki, and Preston Williams in the passing game. Simultaneously, Gaskin could even see an increase in volume and production over the second half of the season, especially because the Dolphins will likely want to lessen the burden on their rookie quarterback.

If you have room on your roster, Tua Tagovailoa is worth a speculative addition to your fantasy team in this week’s waiver wire runs.