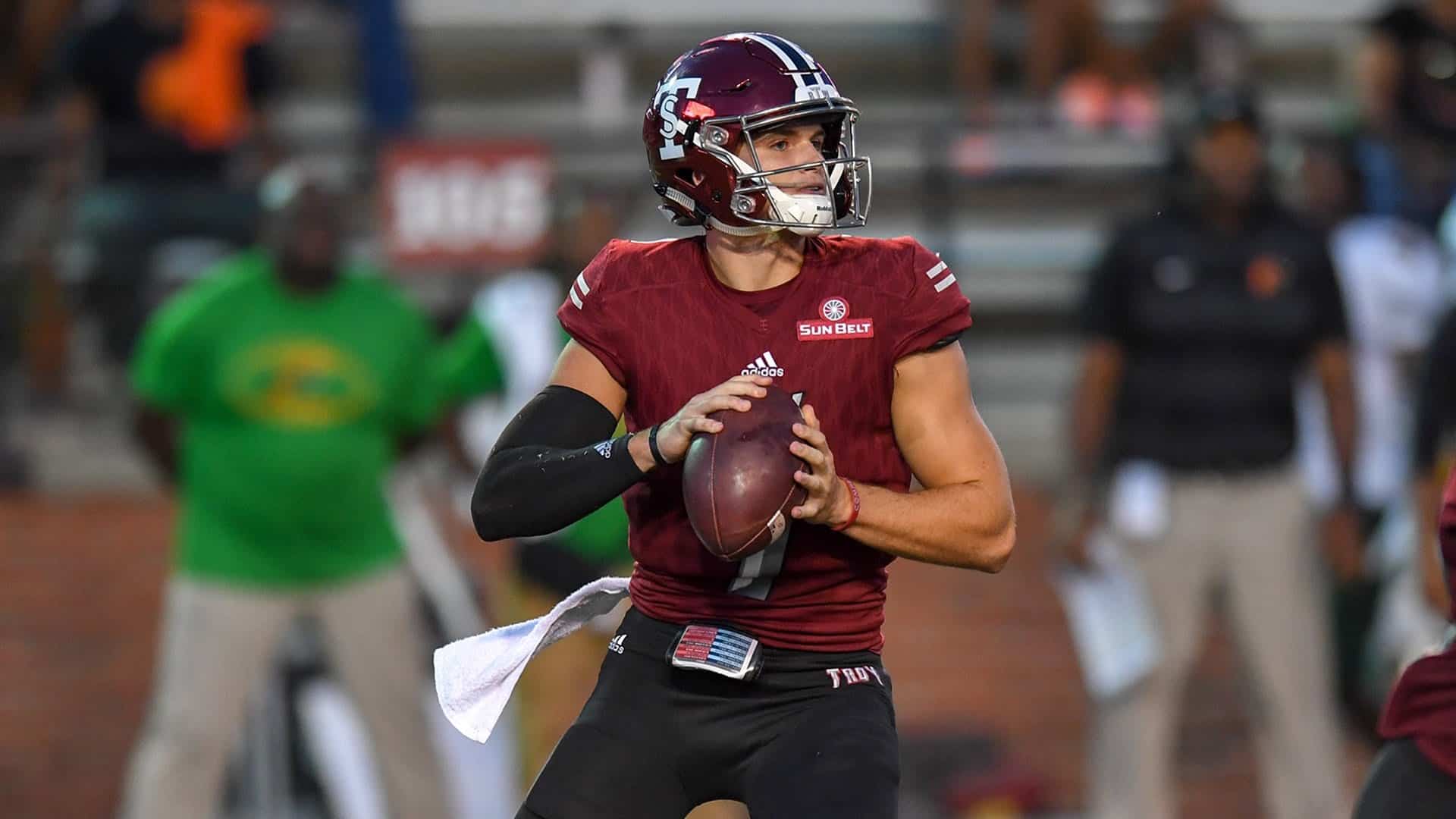 At the risk of sounding redundant, the Alabama Crimson Tide are once again the talk of college football. With five National Championships accrued over the last ten years, the program has assuredly etched it’s name in college football lore. However, it is another team in the state of Alabama that is likely to boast one of the biggest sleepers in the 2020 NFL Draft — Troy quarterback Kaleb Barker.

Kaleb Barker has always been something of a local legend.

Growing up in Decatur, Alabama, Barker was a gridiron standout at Priceville High School. As a senior, the dual-threat signal-caller passed for 2,848 yards and 31 touchdowns, against just seven interceptions. He also accumulated 1,495 yards and an astounding 21 touchdowns on the ground. Rewarded for his offensive output, Barker was named the Alabama 4A Back of the Year and Huntsville Region Player of the Year. His total yardage (4,343 yards) was third-most in Alabama High School Athletic Association history.

Despite a stellar career, Barker was lightly recruited coming out of high school, drawing offers from only Alabama State and Troy. His limited choices made for an easy decision for the right-handed gunslinger: He would remain in-state and continue to build his legacy.

After opting to attend Troy University, Barker went on to appear in 12 of 13 games for the Trojans. The 6-foot-1, 200-pounder served as the team’s third-string quarterback and holder on field goals and extra points. He wasted little time making an impression to the coaching staff, running for a 50-yard touchdown in the season-opening blowout victory over Austin Peay. His 50-yard jaunt was the longest run by a Troy quarterback since 2007.

Though sparingly used as a freshman, Barker completed three of four pass attempts for nine yards and carried the ball nine times for 101 yards and a touchdown.

While he entered camp buried on the depth chart, Barker managed to elevate to the primary backup to starting quarterback Brandon Silvers.

Featured as more of a runner than a passer in his second season in offensive coordinators Kenny Edenfield’s and Matt Moore’s system, Barker carried the ball 21 times for 181 yards and two touchdowns. He completed 8 of 13 pass attempts for 143 yards and a touchdown — a 59-yard deep heave to wide receiver Richard Hallman against Texas State.

He may not have known it then, but his hard work, preparation, and athleticism were about to be revealed to the college football world.

As the old adage goes, good things come to those who wait.

After two years of waiting his turn for full control of Troy’s offense, Kaleb Barker finally got his wish — temporarily, that is.

Starting the first six games of the season, Barker completed 92 of his 126 pass attempts for ten touchdowns and just two interceptions. He also proved he could make plays outside of the pocket, carrying the ball 57 times for 261 yards and three touchdowns.

He was beginning to find his groove – until adversity struck.

In a Week 6 Thursday night Sun Belt Conference tilt against Georgia State, Barker had the offense firing on all cylinders. He was making plays with his arm and his legs. With about 12:58 left in the second quarter, however, Barker headed to the medical tent after sustaining what appeared to be an apparent knee injury, an injury that ultimately ended the quarterback’s first season as a starter at the collegiate level.

Going into his senior season with just six collegiate starts under his belt, the one thing Barker could fall back on was coaching stability. Until now.

Returning hungrier than ever from a knee injury that robbed him of more than half of his junior season, Kaleb Barker was back in the saddle for one final season. Out to prove he could stay healthy and sustain his brief college success, he now had limited time to prove himself to NFL evaluators.

Through seven games, the 2020 NFL Draft hopeful leads the Sun Belt Conference in passing yardage (2,091) and is tied for the most touchdown passes (18). His early-season highlights include a breakout game against Southern Mississippi, in which he threw for 504 yards and four touchdowns, and a 384-yard, three-touchdown performance against the formidable Arkansas State Red Wolves.

Barker looks more comfortable at the helm with each passing week, most recently amassing a 421-yard, two-touchdown showing in a landslide victory over Georgia State. He finished with a career-best 75.6 completion percentage.

When assessing Troy QB Kaleb Barker, it’s blatantly obvious that he is far from a finished product. He hasn’t even scratched the surface of how good he can be if he plays to his capabilities.

Looking ahead to the NFL Draft,  Barker is a late-round prospect that NFL teams will want to take a chance on. For one, he has shown continual growth in every game. His pocket awareness has improved significantly, along with his footwork and throwing mechanics. Gone are the days where he wouldn’t set his feet, relying purely on his athleticism and arm strength to fit the ball in where he wanted it. Under Lindsey’s tutelage, Barker is evolving into a dynamic quarterback.

Some evaluators are sure to be enticed by Barker’s remarkable maturity, as the senior is already married, seamlessly adapted to new coaches, and fought back from a serious knee injury to lead his respective conference in passing when the chips were down.

There are some areas of his game that need to improve, namely accuracy and his ability to read some of the more elaborate defenses, but the tantalizing athleticism should ultimately get him selected as a day 3 prospect on draft day next April in Las Vegas.