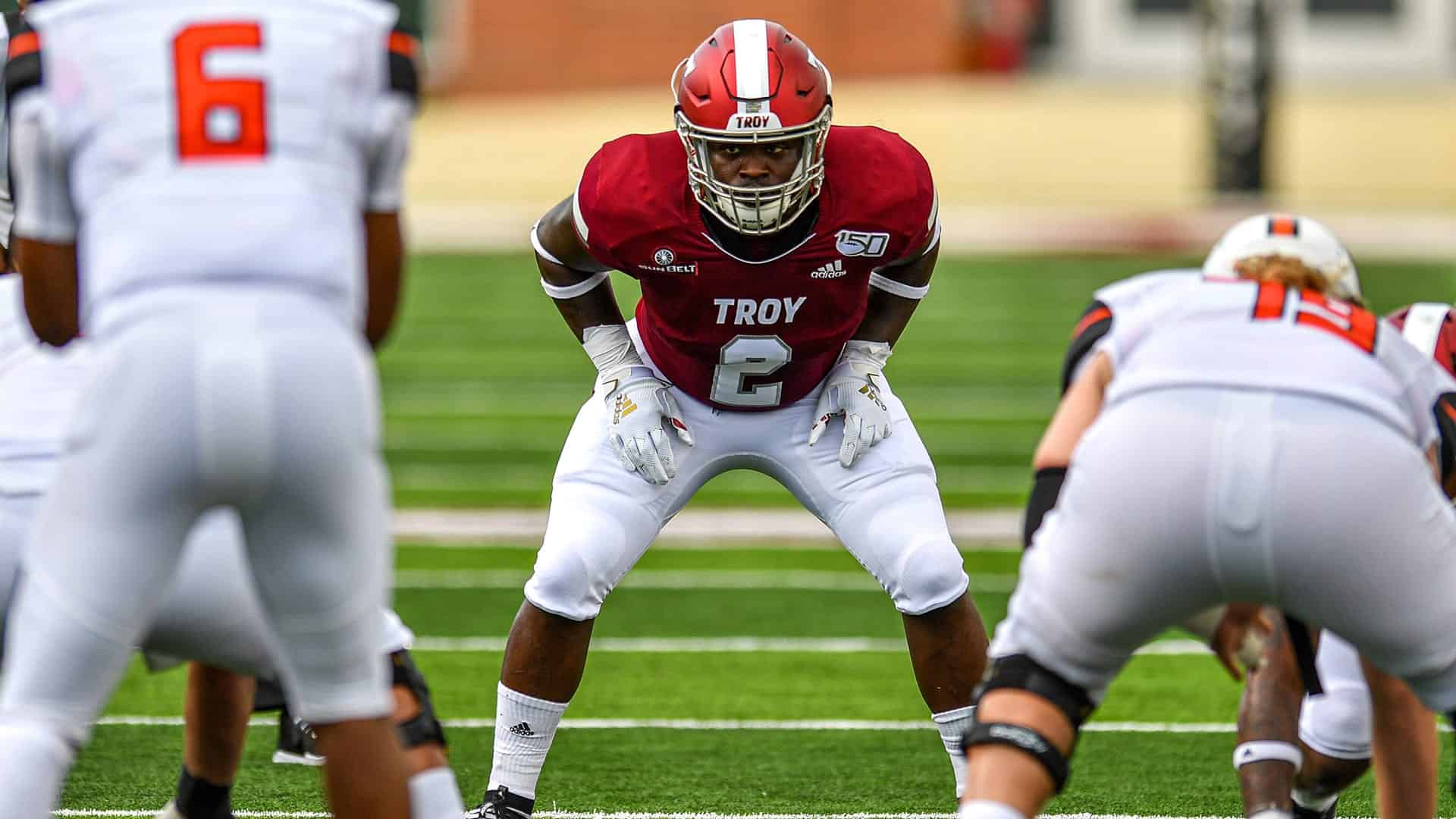 The Sun Belt Conference has a long-standing history of producing some of the top prospects in college football, and the 2020 season figures to be no exception. Delving beneath the surface, you’ll unearth an immensely gifted linebacker with eye-popping production out of Troy University named Carlton Martial.

Martial, who has taken a non-traditional path toward collegiate relevance, happens to be among the nation’s premier defensive players — and one you’ve likely never heard of. This piece examines Martial’s body of work through two seasons, and what the 2020 season could have in store for the rapidly ascending redshirt junior.

Originally written off as an undersized walk-on in 2017, Carlton Martial spent his first season on campus refining his craft and adjusting to the collegiate level, before ultimately earning a scholarship and becoming a fixture on the Trojans’ defense. In fact, the 5-foot-10, 216-pound linebacker started nine games at middle linebacker in 2018, leading all Sun Belt freshmen in tackles (76) and tackles for loss (8.5), while finishing second in sacks (3.0). The Mobile, Alabama native also managed to rank fifth nationally against the run on his way to earning Freshman All-American honors from the FWAA, USA Today, and The Athletic.

Martial’s spectacular late-season performance, coupled with his six-tackle, two-forced fumble, and fumble recovery effort in the Dollar General Bowl, would prove to be a sign of things to come for the uber-active second-level defender.

Now a known commodity with increasing expectations thanks to a prolific first season that effectively jump-started his collegiate career, Martial entered his redshirt sophomore campaign as a second-team All-Sun Belt preseason selection. Through 12 games, the Trojans linebacker proved to be among the more intriguing risers in college football after amassing 126 tackles (18.5 for loss), four passes defended, 4.0 sacks, three interceptions, three forced fumbles, and a fumble recovery.

Martial’s standout performances included a 16-tackle effort against Southern Mississippi, a seven-tackle, 1.5-sack outing against Missouri, and a 12-tackle, 1.0-sack, one-forced fumble showing in a one-point victory over Coastal Carolina.

One would be hard-pressed to find a better feel-good story in college football than Carlton Martial’s, who arrived at Troy as an undersized walk-on merely three years ago, only to evolve into one of the premier defenders in the country.

Although he plays in a conference where the competition is largely overshadowed by the Sun Belt’s more formidable counterparts, Martial will be a player to keep an eye on in 2020. While the redshirt junior may not possess the requisite length for the linebacker position, he more than makes up for it with his athleticism, toughness, and instincts.

Martial thrives as a run-and-hit second-level defender that flows sideline-to-sideline to locate the football. Whether he plays around the line of scrimmage — where his innate ability to diagnose plays and shoot the gap to defend the run becomes an invaluable asset — or showcases his range, ability to play in space, and closing speed in coverage, Martial has the physical tools to make an impact at the NFL level.

There’s a chance Martial never becomes more than a high-volume sub-package player at the next level, but the Trojans standout boasts a diverse skill set, relentless motor, versatility to move around formations, and a lengthy resume of being a heady playmaker — who just happened to operate in relative anonymity on Saturday afternoons the past two seasons.