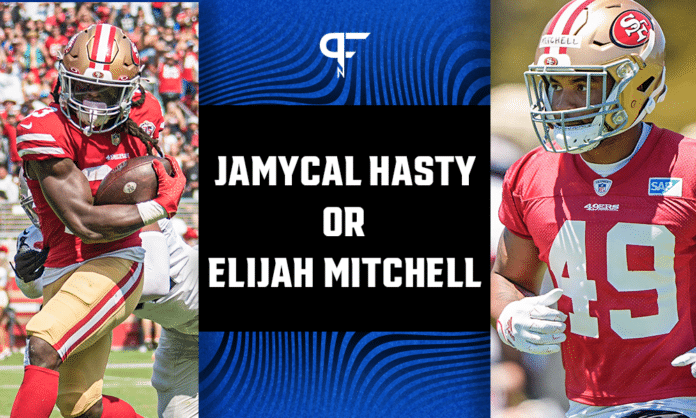 With Trey Sermon inactive, what does this mean for Eli Mitchell and JaMycal Hasty in terms of the RB2 in San Francisco's backfield?

By Ben Rolfe
September 12, 2021
What's in this article? Click to show
JaMycal Hasty could be the backup with Trey Sermon inactive
Eli Mitchell gets the nod over his fellow rookie
What does this mean for Sermon?

JaMycal Hasty and Eli Mitchell are set to backup Raheem Mostert for the San Francisco 49ers after Trey Sermon was named inactive for Week 1. Who are Hasty and Mitchell, and do either carry fantasy football value into Week 1?

JaMycal Hasty could be the backup with Trey Sermon inactive

Hasty has experience in San Francisco’s system having played with the 49ers last season. In eight games, Hasty had 39 rushing attempts for 148 yards and a touchdown. He also added 7 receptions on 8 targets for 33 yards. During his college career at Baylor, Hasty had 1,998 rushing yards and 15 touchdowns.

While Hasty does not have the upside that many expected Sermon to have, he could be a valuable fantasy option backing up Mostert. The matchup with the Lions is extremely favorable, as they were the worst teams against the position last season.

If Hasty can see even 30% of the carries, he could have a chance to score between 8-10 fantasy points. That would make the 49ers RB a potential flex option in Week 1.

Eli Mitchell gets the nod over his fellow rookie

If you were to guess whether Sermon or Mitchell would have been inactive, many would have chosen Mitchell. Selected in the sixth round out of Louisiana, Mitchell had 3,267 rushing yards and 41 touchdowns on 527 rushing attempts. He also added 49 receptions for 597 yards and 5 touchdowns.

The expectation is still that Mitchell is the third option behind both Hasty and Mostert. However, San Francisco’s backfield can be tough to work out. If you are in a deep fantasy league, Mitchell could be well worth a flier this week in an attempt to strike lucky.

What does this mean for Sermon?

It is a bizarre circumstance for Sermon, who many expected to push Mostert as the lead back this season. He was listed second on the 49ers’ depth chart as recently as this week, so being made inactive was a surprise.

There could be a perfectly logical explanation for Sermon being made inactive — no need for a meltdown just yet. However, from a fantasy perspective, this is concerning given he was often highly drafted. For now, you have to hold and hope because Sermon’s value just took a massive nosedive.