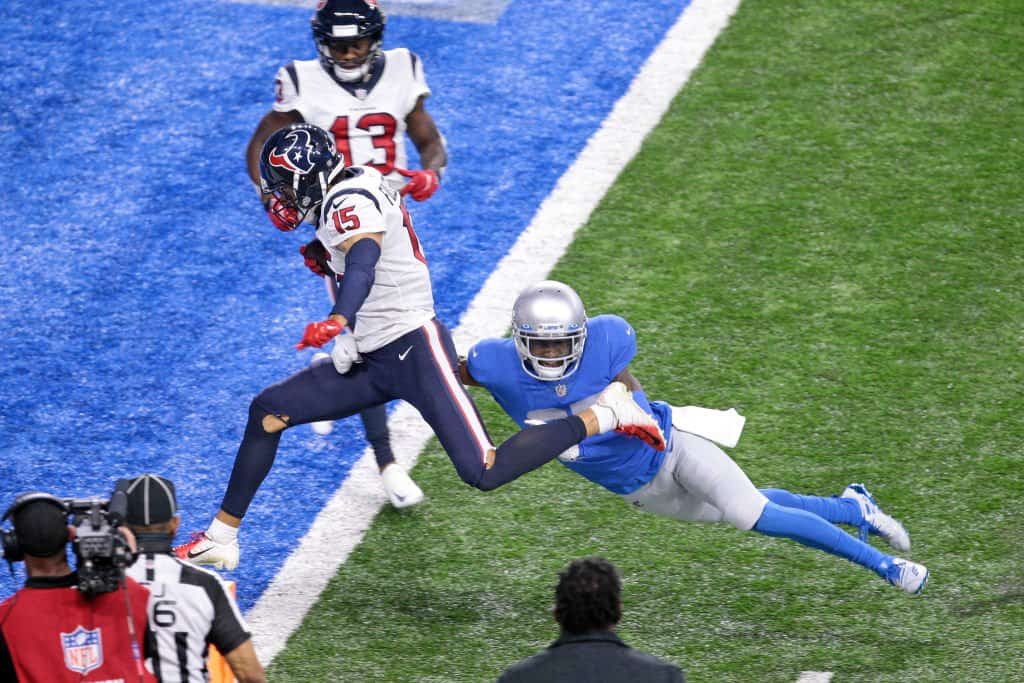 Welcome to Week 12’s ranking of the top ten WRs according to the (Bx) Movement’s Offensive Value Metric (OVM). This week, let’s start by addressing a glaring omission from our list: Tyreek Hill.

The curious case of Tyreek Hill

In just the first quarter of Sunday’s matchup with the Tampa Bay Buccaneers, Hill totaled over 200 yards and two touchdowns and ended the game with 269 yards and three touchdowns. That yardage total was the highest of the week by almost 100 yards. And yet, his OVM grade of 38.02 didn’t quite make the cut.

To be clear, that grade isn’t terrible; Hill was only a few spots from making our list. However, his performance illustrates that box score success is not what the OVM uses when assigning players their grades. Instead, it measures how responsible a player is for their statistics. A player can have poor box score statistics and an excellent OVM grade, and vice versa. The two are not inherently tied to each other. Now, with that out of the way, let’s get to the WRs who actually earned a spot on our top 10 list in Week 12.

Note: Players from Wednesday’s game between the Baltimore Ravens and Pittsburgh Steelers are not currently included on this list. 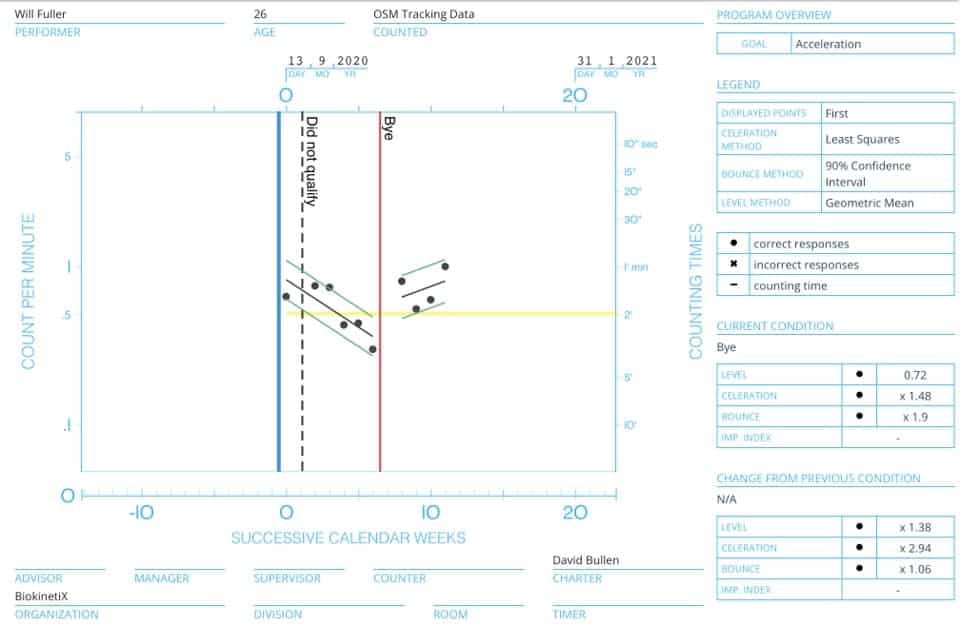 Fuller’s accomplishments from last weekend have been cast in an unfortunate light, courtesy of his suspension for violating the NFL’s policy regarding performance-enhancing drugs. There is much to be said about how such violations should affect a player’s legacy. But for now, let’s focus on Fuller’s on-field performance, which was undeniably impressive. His Week 12 grade was the eleventh-highest recorded by any player since 2016 and the third-highest by a wide receiver.

Fuller led the NFL this week by averaging 5.7 yards of separation when he was targeted, despite being given just 3.3 yards of cushion by defenders when the ball was snapped. It is rare for a receiver to have higher separation than the amount of space they were given, and even rarer for the difference to be so substantial.

Fuller also averaged 11.2 yards after the catch, which ranked fifth among wide receivers and was 2.9 yards higher than expected, according to the NFL’s advanced metrics. Add his relatively impressive 85.71% catch percentage to those stellar statistics, and you have all the ingredients for one of the best OVM performances ever. 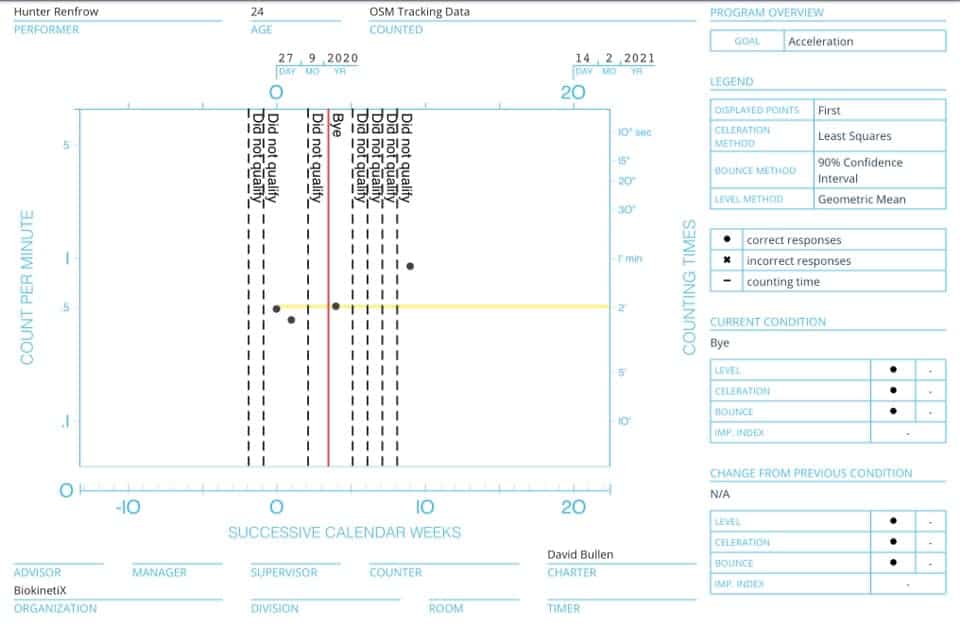 Renfrow was last season’s highest-graded wide receiver, an impressive feat for a rookie. His performance has declined in 2020, with his OVM grade dropping by about four points, but he is still having a solid season. He has qualified for a grade four times, and in each of those games, his grade has increased, with Week 12’s grade being his best of the season by far.

Renfrow’s advanced statistics actually follow a similar pattern to Fuller’s, just slightly worse. He averaged five yards of separation, tied for the third-highest total of the week, a number that was far higher than the 3.6 yards of cushion he was given. He also averaged 9.3 yards after the catch, 3.2 yards higher than expected. However, his catch percentage of 77.78% was relatively low, given the rest of his statistics. 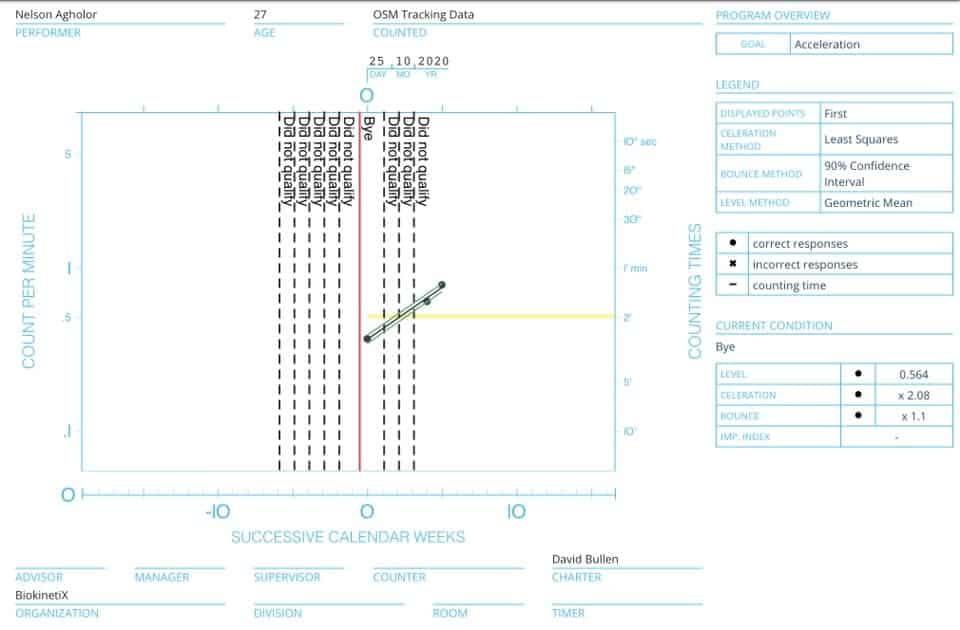 Yes, there are two Raiders WRs on Week 12’s top 10 list. That might be a surprise, given Las Vegas’ total inability to create any offensive momentum whatsoever as they were thrashed by the Atlanta Falcons, but that can’t be pinned on the receivers. It just goes to show that highly efficient individual performances can appear even in games that don’t look pretty for the offense overall.

As for Agholor specifically, he has rarely qualified for an OVM grade this season but, like Renfrow, he is on a steep upward trajectory. In Week 12, he caught a solid 83.33% of his passes and averaged a high four yards of separation while being given four yards of cushion when the ball was snapped.

Were the season to end today, Deebo Samuel would be the NFL’s highest-graded wide receiver. He hasn’t been targeted consistently this season, only qualifying for a weekly grade four times due to injury. However, two of those grades ranked first among qualifying wide receivers during their respective weeks.

In Week 12, Samuel once again finds himself near the top of the rankings. He caught a relatively high 84.62% of his targets and averaged 12.4 yards after the catch, 5.2 yards higher than expected. Both of those averages ranked as the third-highest among qualifying WRs in Week 12.

With Fuller’s aforementioned suspension and the recent release of Kenny Stills, Brandin Cooks will need to play a much larger role in Houston’s offense in their remaining games. Fortunately for the Texans, Cooks has ranked inside the top five on our list in each of the previous two weeks.

In Week 12, Cooks’ success was primarily the result of one statistic: his catch percentage. To any NFL wide receivers who happen to be reading this list, the easiest way to make the cut is to catch 100% of your targets. Four of the five WRs to do so in Week 12 made this list, Cooks being one of them.

The Panthers haven’t exactly set the NFL on fire in 2020, and on Sunday, they lost to the Minnesota Vikings, another team that has struggled thus far this season. However, Curtis Samuel is quietly having himself a solid year according to the OVM; he’s had receiving grades above 40 three separate times, including Week 12.

He may not be the featured receiver in his offense, but Samuel has nonetheless been highly efficient in his role. Like Cooks, Samuel caught 100% of the passes thrown his way on Sunday and averaged 8.8 yards after the catch.

Take away the touchdown from Lazard’s box score (it isn’t included in calculating his OVM grade anyway), and you have one of the least impressive statistical performances to receive a high OVM grade that I’ve ever seen. However, like a few other players on this list, Lazard did an exceptional job of getting open.

Lazard averaged 5.4 yards of separation, the second-highest total of the week, despite being given 5.3 yards of cushion. Lazard performed relatively poorly in basically every other relevant area, but his outstanding performance on that one statistic lands him in the seventh spot on our list this week.

Higgins lost his quarterback and fellow rookie Joe Burrow in Week 11, and his grade from that game reflected those turbulent circumstances. At 8.95, it was his worst of his young career by a fair margin. However, in Week 12, Higgins bounced back with his second-highest OVM grade of the season, an increase of more than 30 points.

What changed? Well, two weeks ago, Higgins caught just 30% of his targets. On Sunday, that number increased to 100%. Hopefully, Higgins can be more consistently efficient going forward.

For the second week in a row, Brown’s ability to make plays after the catch proves so spectacular that he earned a top 10 OVM grade despite catching a relatively low percentage of his passes.

Brown’s catch percentage of 66.67% was higher than last week but still lower than most of the other players on this list. However, his 14.2 yards after the catch ranked second this week, and that already impressive number was 9.1 yards higher than expected, the largest differential by any qualifying player in Week 12, WR or otherwise. If Brown caught more than two-thirds of his passes every game, he might be the most valuable receiver in the league.

If you didn’t know who Chad Beebe was before last weekend, don’t worry, you probably aren’t alone. On Sunday, Beebe scored his first NFL touchdown and totaled more than 60 receiving yards for just the second time in his career (he caught one pass for 61 yards in Week 2 of last season).

Beebe is the final of the four WRs on Week 12’s list to catch 100% of his targets. The rest of his statistics are actually rather unimpressive. For example, he averaged a paltry 2.4 yards after the catch, 1.2 yards lower than expected. However, as I said earlier, catching every pass thrown to you will often earn you a high OVM grade, even if the rest of your statistics aren’t particularly impressive.