Welcome back for another installment in our top 10 running backs through 2020. This week, we feature a familiar Patriots player who just can’t stay away from this list, a rookie in Detroit who made an explosive first NFL career start, and a veteran in Cleveland making his way back from injury.

For this ranking system, we are looking at which players are carrying the most overall value for their offenses based on their sole, individual production. Professional football is a team sport that requires gratuitous input from many different positions. But the names on this list are the players that are creating the most offense without the influence of his teammates — true individual production.

We collect this data using the Offensive Value Metric created by The (Bx) Movement. The Offensive Value Metric (OVM) was created to provide a numerical scale to measure the overall value that an individual player provides to his offensive unit. A player with a higher OVM grade isn’t necessarily a higher skilled player, but they do create more offensive production for their team than a player with a lower OVM.

OVM collects different levels of data from sources such as NFL’s Next Gen Stats and separates out the data points that are influenced solely on the individual player. That filtered data is run through a formula to create an OVM grade reflective on the amount of value the player brings to his offensive group.

To find out more on the Offensive Value Metrics, and view the complete database, follow the link here.

Kareem Hunt had an incredibly impressive game in Week 10. He rushed for 104 total yards across 19 carries in a win over the Texans. It wasn’t just the yardage that was great (Hunt was one of only eight running backs to break 100 yards last week), but it was how he did it. Hunt grinded out yards against the Texans’ defense. Hunt consistently faced a stacked box of at least eight defenders. His 63.16% 8+D% was the highest recorded percentage of any running back in Week 10. 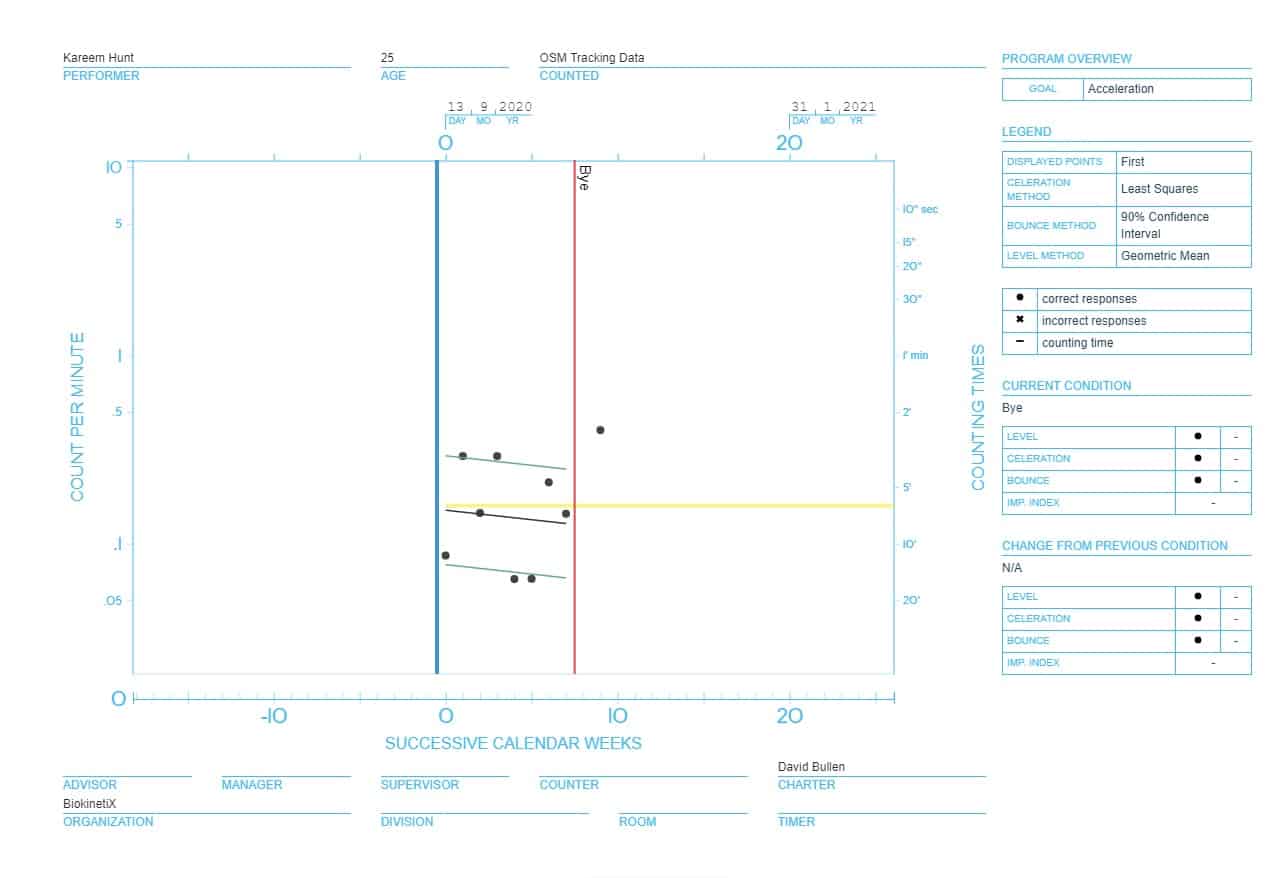 Cam Akers’ game against the Seahawks didn’t leave much of an impressive stat line. But remember, for team value, we look at their production output, not just yardage. Akers rushed for more yardage than expected of him on 40% of his snaps last weekend. He did this against a wall of defenders on 60% of his attempts. And even with the limited snaps, he still ran with an efficiency rating of 4.93 — the fifth-highest EFF rating for running backs last week. Any RB coach would be more than excited about these grades.

Damien Harris continues to make an appearance on the top 10 most valuable running backs list. Week 10 against the Ravens brought career-high numbers in carries and overall yardage for Harris. His 121 rushing yards was the third-highest last week and, as a common trait among top valued running backs, did this against a stacked defense. The Patriots are meeting the Texans next week, and, at this point, I’m just expecting Damien Harris’ name on this list again in Week 11.

No one rushed for more total yardage in NFL Week 10 than Ronald Jones. He ended the day with 192 rushing yards over 23 attempts. That’s an average over nearly 8.5 yards of positive offense every time he touched the ball. He outperformed his expected yardage on over 65% of his total snaps, which was higher than every other RB last week, making him one of the top five running backs in Week 10.

Welcome back, Nick Chubb. Chubb has been missing in action since suffering a knee injury all the way back in Week 4. But he was able to put on one very impressive show against the Texans last week. Rushing for 126 yards, he outperformed his expected numbers on nearly 50% of his attempts.

Wayne Gallman is another example of a running back taking advantage of a sticky situation. Gallman rushed for 53 yards last week while taking a heavier workload for the Giants with Saquon Barkley and Devonta Freeman both out on injury. He outperformed his expected yardage on nearly 60% of his attempts on Sunday.

D’Andre Swift is one of only two rookies to make the top 10 this week. Swift played a monster game on Sunday in what was the first NFL start of his career. He rushed for 81 yards but also picked up another 68 yards in the passing game. He ran with an efficiency rating of 3.42 and scored his first NFL touchdown.

Devontae Booker is another running back who performed well above his expected output in last weekend’s win over the Broncos. He rushed for 81 yards on 16 attempts and was able to bring in two touchdowns.

Aaron Jones was limited on Sunday with just 13 attempts. However, he managed to be one of the most efficient backs in the league, even with the limited touches. He picked up 46 yards with the sixth-highest efficiency rating in Week 10 of 4.73.

Duke Johnson is another running back who did a lot with a little in Week 10. Even though he only had 14 attempts, he averaged nearly four yards per touch with an efficiency rating of 3.49. Johnson’s efficiency rating over the last several weeks has maintained consistency, and he’s a strong spot in a struggling offense.