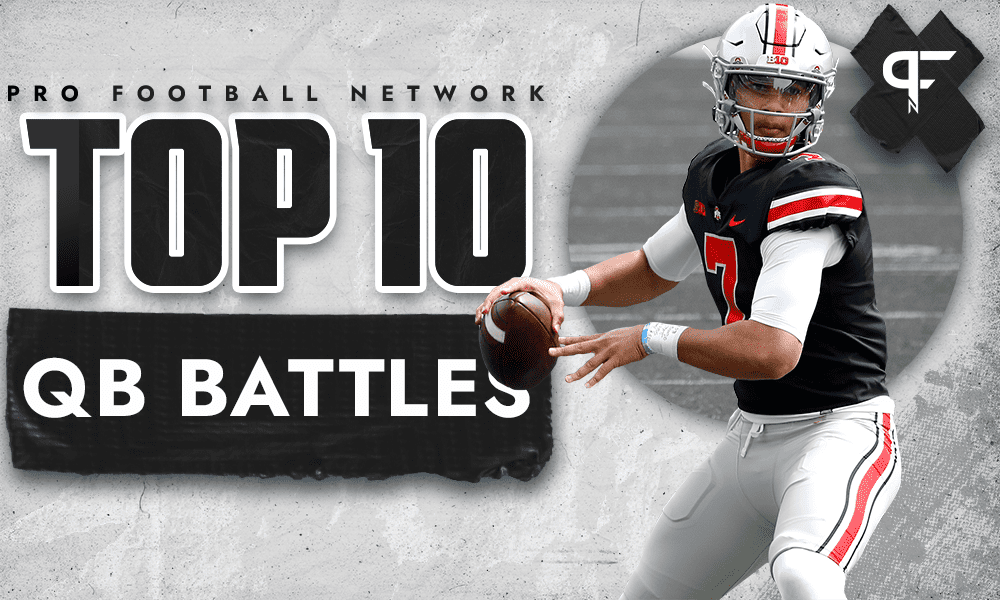 The 2021 NFL Draft saw franchises steal 10 quarterbacks from the college ranks. Countless more signal-callers graduated, transferred, or entered the NFL as undrafted free agents. As a result, many college football teams are figuring out who will be under center next season. With spring practices concluded and summer programs beginning, these schools hope to find their starting passers before Week 1. Here are the top 10 college football QB battles to watch in 2021, as well as a few honorable mentions!

Kicking off our list is possibly the most significant QB battle in the nation.

Unlike Alabama (Bryce Young) and Clemson (D.J. Uiagalelei), who have their succession plans in place at quarterback, Ohio State has what seems to be a three-man competition brewing. The Buckeyes have a stable of talent at every position, but replacing one of the best signal-callers the last two years in Justin Fields will be a tall task.

C.J. Stroud (redshirt), Jack Miller (redshirt), and Kyle McCord (true) are all freshmen with little wear and tear on their proverbial tires. Although Miller began 2020 as the No. 2 behind Fields, Stroud ended the season as the listed backup. Stroud was the third-highest-rated QB in the 2020 recruiting class, behind only Uiagalelei and Young.

Both he and Miller have a leg up over five-star recruit and early enrollee McCord, thanks to their one year in Ryan Day’s system. But, according to Day, none of the young QBs set themselves apart during spring practices. As a result, we may not have a concrete answer until the season opener at Minnesota.

With Kellen Mond off to the NFL, Texas A&M must find his heir apparent. Luckily for head coach Jimbo Fisher, three impressive QBs are waiting in the wings for their numbers to be called. Despite four-star true freshman Eli Stowers receiving his fair share of hype, Haynes King and Zach Calzada are the frontrunners.

Interestingly, King and Calzada could not be any more different as prospects. King was the No. 5 dual-threat QB in 2020, drawing comparisons to the Aggies’ very own Ryan Tannehill due to his athleticism. On the other hand, Calzada is a 6’4″ pro-style passer with a big arm who will not be mistaken for Lamar Jackson.

Considering Fisher’s offenses in prior years and the type of quarterbacks he’s coveted, I lean toward King holding the crown come fall. However, reports from spring practices point to the QB battle being tighter than previously expected.

Is 2021 the year Michigan and Jim Harbaugh finally get over the hump? Unlikely, but having competent QB play certainly increases their odds. After Dylan McCaffrey opted out of 2020 (ultimately transferring to Rice) and Joe Milton taking his gifts to a school later on this list, the position was anyones for the taking. Yet, quarterbacks coach Matt Weiss has already declared Cade McNamara the starter. But as we know, nothing is ever certain in football.

McNamara has the upper hand, having been in the system since 2019 and taking over as the starter late in 2020. Against Rutgers, he showcased his ceiling, completing 27 of 36 passes for 260 yards, 1 touchdown, and scoring another on the ground. Although, the very next week he flashed his floor, going 12-of-25 passing for 91 yards and zero touchdowns.

Redshirt junior Alan Bowman transferred from Texas Tech to throw his hat in the ring in Ann Arbor. Bowman completed 67% of his passes for 5,260 yards, 33 touchdowns, and 11 interceptions in three seasons with the Red Raiders. He brings 16 games of experience and a dangerous arm, but his injury history and missing spring ball hurt his odds of being QB2, let alone QB1.

Last but certainly not least, we have J.J. McCarthy. The five-star newcomer signed in December and is turning heads at camp — just look at this never-going-to-happen-in-game throw. The IMG product has received buzz from reporters and fans and might make Weiss rethink his decision before the season.

If you did not watch the Alamo Bowl last season, stop what you are doing and turn on the highlights. Casey Thompson and RB Bijan Robinson torched Colorado’s defense for 55 points. It is possible new head coach Steve Sarkisian watched the tape of that game and thought right then and there that Texas was, in fact, back.

Hyperbole aside, one game does not signify the overall ability of a player. However, it can showcase that player’s physical abilities. Against the Buffaloes, Thompson stepped in for an injured Sam Ehlinger and completed 8 of 10 attempts for 170 yards and 4 touchdowns. Having sat behind Ehlinger for three years, Thompson is primed and ready to take over.

Not so fast, as Hudson Card is not just a name on the depth chart. Who was the fourth-ranked QB behind Uiagalelei, Young, and Stroud? You guessed it, Card. The esteemed Lake Travis prospect provides hometown pride that is significant in Austin, Texas. Regardless of who begins the season at QB, the Longhorns will boast one of the best backfields in the nation.

One of the more exciting college football QB battles heading into 2021 lies in Tallahassee. The biggest draw of the bunch is UCF transfer McKenzie Milton. A truly remarkable story, Milton was cleared for full contact two years after suffering a devastating knee injury. Before the incident, Milton tore up the AAC to the tune of 8,683 yards and 72 touchdowns against 22 interceptions across three seasons.

Although Milton is garnering the most attention, it’s important to remember Jordan Travis’ name. Travis struggled as a passer last season, but who didn’t struggle on a flailing Seminoles squad? Where he shined was on the ground, racking up 569 yards and 7 scores off 97 carries. With a true offseason and some cohesion with head coach Mike Norvell, it is safe to anticipate Travis making strides as a passer.

Lastly, we have former 2020 four-star recruit Chubba Purdy, brother of Iowa State’s Brock. Chubba dominated at Perry High School as a senior, leading to 247Sports ranking him the No. 6 dual-threat QB in the class and the eighth-best prospect in Arizona. Unfortunately, Florida State shut down the young signal-caller early in spring practices due to a lingering shoulder injury. Thus, Purdy seems to be the future of the Seminoles, not the present.