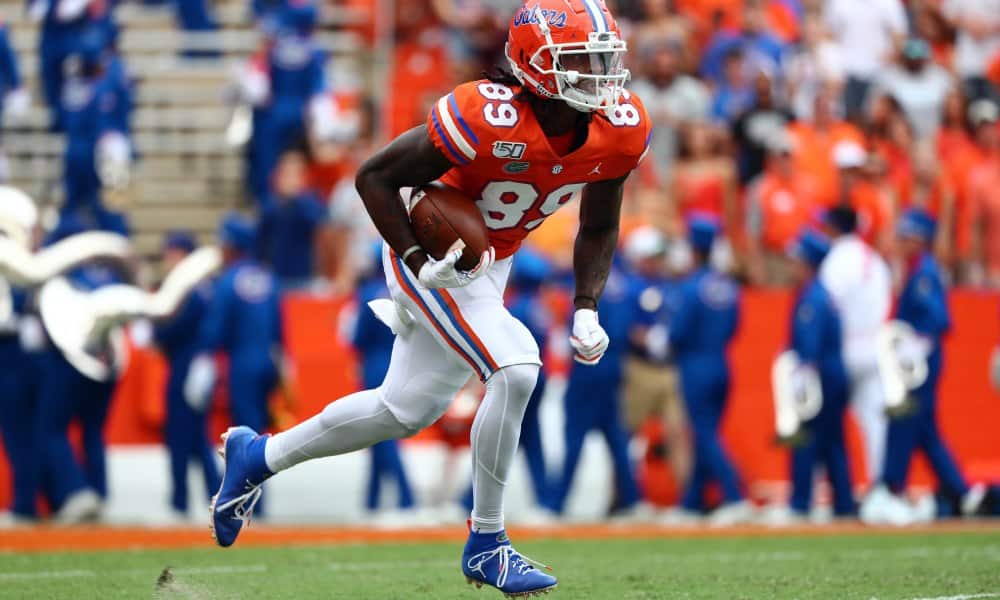 Training camp is underway for the Denver Broncos ahead of the 2020 season, and so far, everything appears to be clicking early on. Nearly every member of the rookie class is flourishing, the off-season acquisitions are shining, and clear favorites are emerging in some of the Broncos’ most hotly-contested position battles. As padded practices continue to ramp up at the UCHealth Training Center, the microscope will shift from player to player as training camp continues.

Denver has been on a hot streak in regards to the NFL draft and that trend looks like it will continue based on what they’re seeing from their 2020 rookie class at Broncos training camp. Wide receivers Jerry Jeudy and K.J. Hamler have been grabbing a majority of the headlines, and rightfully so. Hamler’s combination of speed and route-running ability has been special, as has Jeudy’s short-area quickness and ability to stop on a dime.

With that said, on day five of Broncos camp, it was the team’s late-round picks that shined on Wednesday. Seventh-round selection Tyrie Cleveland isn’t fully developed and likely won’t become a huge part of the offense yet, but he clearly has some noticeable traits. His size is immediately noticeable compared to the other receivers, as is his speed and acceleration. On two of his receptions in Wednesday’s practice, a Broncos corner seemingly had the angle on him, but Cleveland managed to ratchet up a gear and beat him to the edge on the outside. Considering Tim Patrick is currently on a one-year deal, it appears likely that Cleveland should be his long-term replacement.

Rookie linebacker Justin Strnad also looked impressive when he was asked to play to his strengths: coverage and instincts. He displayed a great sense of locating the receivers in his area and aligning where he needed to be, which is promising considering how complex Broncos head coach Vic Fangio’s defense is.

Rookie tight end Albert Okwuegbunam had a strong day on Wednesday alongside Noah Fant with his size and speed. There were multiple times he used his speed to burst by linebackers to make a catch in the soft spot of the Broncos zone defense right in front of the safeties. There was one play where his route carried safety Trey Marshall up the seam, getting behind him to find himself open, only to be overthrown by backup quarterback Jeff Driskell.

In the team’s 11-on-11 period, the Broncos third-round picks came into the spotlight. Rookie center Lloyd Cushenberry received his first reps with the first-team offense and did a solid job holding up against the Broncos rotating interior pass-rushing trio of Shelby Harris, Jurrell Casey, and Dre’Mont Jones, which is about as tough of an assignment the rookie center should see all season.

While these players have all stood out in early showings, without any preseason games, it will be important to analyze how these players perform against somebody other than their teammates early in the 2020 season.

Not only is the Broncos rookie draft class impressing coaches and media members, but the team’s off-season additions are also shining at camp as well.

Jurrell Casey has separated himself from other players amongst Denver’s highly-talented defensive line unit in both individual drills and in 11-on-11 periods. Being traded for a seventh-round pick appears to have added an extra chip on his shoulder with the way that he has been moving on the field.

In the secondary, CB A.J. Bouye has looked like he could be returning to his pre-2019 form. When the Broncos sent a fourth-round pick to Jacksonville in exchange for Bouye, they were banking on him rebounding from a disappointing season in order to help them replace Chris Harris Jr., and so far, the results have been promising at practice.

Lastly, although the tackles continue to struggle, alongside Cushenberry and Dalton Risner, Graham Glasgow looks like he could lead the Broncos to have a strong interior this season. The Broncos defensive line should be one of the league’s best, and Glasgow and company have kept quarterback Drew Lock from seeing much pressure up the middle, so far.

Prior to the start of training camp for the Broncos, it was difficult to predict what Denver’s depth chart would look like at TE, CB, and running back. After five days of practice, some players are beginning to separate themselves from others.

On offense, the most high-profile battle is the one for the starting RB job between Phillip Lindsay and Melvin Gordon. Gordon hasn’t performed badly, but Lindsay has still managed to look like the clear No. 1 back, thanks to an improved ability as a pass-catcher and the same burst, vision, and toughness that’s made him a consecutive 1,000-yard rusher the last two seasons.

At TE, Jake Butt has been turning in a strong camp and appears as if he should at least be the Broncos’ fourth player at the position as long as he can stay healthy. He even took the majority of snaps with the first-team offense, as Fant sat out during Wednesday’s practice. With Nick Vannett going through concussion protocol and Andrew Beck still working his way into football shape, Butt has a clear cut advantage in comparison.

In the ongoing competition for the Broncos third CB spot on the depth chart, De’Vante Bausby has been the most impressive player at the position not named A.J. Bouye or Bryce Callahan. With that said, keep an eye out for the team’s third-round rookie Ojemudia if he can continue to perform at the level he did on Wednesday.