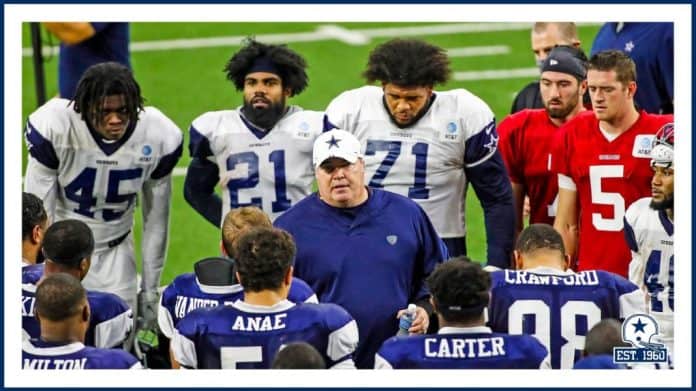 Three biggest storylines for the Dallas Cowboys in 2020

One more Sunday without football until the Cowboys take the field against the Rams. Here are a few Cowboys storylines for 2020.

By Marc Magana
September 3, 2020
What's in this article? Click to show
Can the secondary handle the loss of Byron Jones?
Is the trio of Amari Cooper, Michael Gallup, and CeeDee Lamb the best trio in the NFL?
Is the combination of Mike Nolan and Mike McCarthy enough to get the Cowboys over the hump?

A new season full of hope is just around the corner for the Dallas Cowboys. This offseason brought some of the most significant changes the Cowboys have seen in years. Even with the changes, expectations are still sky-high for the team after a mediocre year in 2019. Here are three Cowboys storylines for the 2020 season.

Can the secondary handle the loss of Byron Jones?

The Cowboys secondary suffered a considerable loss when Byron Jones decided to take his talents to Miami. Interestingly enough, the team chose not to use that money to pay Dak Prescott, but that’s a topic for another time. The passing game is king in the modern NFL. The NFL’s first 5,000 yard passing season was in 1984 by the legendary Dan Marino, but it didn’t happen again until Drew Brees did it in 2008. Since then, there have been ten passers going over the 5,000-yard mark.

Cornerbacks and safeties are asked to cover wide receivers and increasingly athletic tight ends. With the loss of Jones, can Chidobe Awuzie, Trevon Diggs, Ha Ha Clinton-Dix, and Darian Thompson find a way to keep opposing passing offenses in check? Can new defensive coordinator Mike Nolan find a way to maximize the strength of this young group? We won’t have to wait long for an answer as the Cowboys face three of the top 15 passing offenses in the NFL last year, two of those being top five.

Is the trio of Amari Cooper, Michael Gallup, and CeeDee Lamb the best trio in the NFL?

Every offseason, the debate rages about who has the best WR group or the best RB group, etc. This year, the Cowboys have a strong case to make for the best WR core in the entire league. Amari Cooper has already proven his worth, and last year, Michael Gallup crossed the 1,000-yard mark. Lamb is the only one left with something to prove in the NFL, and word from training camp is positive.

These three are a pick your poison type trio. It doesn’t matter who gets the touches; they can all hurt you in a variety of different ways. Adding to the difficulty for opposing defenses is the fact that the RB in the backfield is pretty good himself. This is definitely a year where the onus will lie heavily on Prescott. Weapons are all over the field for the Cowboys, and by the end of the year, this trio could be the best in the NFL.

Is the combination of Mike Nolan and Mike McCarthy enough to get the Cowboys over the hump?

Arguably the biggest Cowboys storyline in 2020 is the new head coach. Since 2009, the Cowboys have only been to the divisional round of the playoffs twice. During Jason Garrett’s tenure, the Cowboys posted a record of 85-67. Although Garrett had some good years, the Cowboys never could get over the hump. Make no mistake; Mike McCarthy was brought in to take this team to the next level. Has he learned enough from his time off?

Related | Cowboys Players With The Most To Prove: All about defense

Nolan has a big responsibility this year as well. Outside of the secondary, Nolan is in charge of getting both Jaylon Smith and Leighton Vander Esch back on track after a rocky season in 2018. He has pass rushers in Demarcus Lawrence and newly signed Everson Griffen. Quite a bit of responsibility for both coaches. Here are the keys to the Lamborghini kid, just drive.

Fantasy Waiver Wire Week 7: Can you trust the Browns’ RBs?