As evidenced by advanced metrics, the New Orleans Saints defense has been good since 2017. How do they remain so consistent in modern times?

The New Orleans Saints have been consistently good on defense in an era where defensive sustainability is effectively unheard of in the NFL. Names and faces come and go from the defensive unit, but the results remain the same. There have been a few stalwarts in the time of their greatness, but Dennis Allen is the architect.

When Allen arrived in New Orleans, the defense was lost. In his first two seasons, they ranked 32nd and 28th, respectively, according to Football Outsiders’ DVOA metric. But since 2017, they haven’t even flirted with a ranking outside the top 10. According to a FiveThirtyEight report from 2019, models could predict an 18.9% share of offensive DVOA year over year, compared to only 9.7% of defensive DVOA. Sacks, interceptions, and fumbles are even more unpredictable.

So the question remains, how the heck do the Saints continue their defensive dominance? Let’s dive into both the analytical pool and peek at the tape to try and find answers.

The Saints defensive turnaround has a few different entry points, depending on what metrics we prefer as individuals. EPA (Expected Points Added) has become more common when looking at offensive and defensive performances.

EPA/play and success rate both hit the top 10 thresholds for the Saints defense in 2019. However, DVOA has had them comfortably inside the top 10 since 2017.

An analytical history of the New Orleans Saints defense

We must (quickly) dig into the numbers a bit more to try and make sense of 2017 & 2018 to see if we can find where we should perceive them. In those seasons, the Saints’ defense finished like this in their defensive drive stats:

Therein lies the issue with statistics at times. Depending on the parameters, we can find measures that tell only part of the story. Think of it as a painting drawn by two portrait artists. The first artist has been takings lessons for a year. They produce quality work, but details are missing in the eyes, nose, and hair.

The first artist is drive stats, and the second artist is per play stats. Then, there is the adorable but awful face drawn in crayon by your 7-year-old that you hang on the fridge. That’s the equivalent of the yards argument. It lacks detail or context.

So we must take heed to the play-by-play metrics, DVOA, EPA, and success rate from those two seasons to paint a clearer picture. Note that the ranking is more important than the number, but the number is added for context for those who understand them.

Although 2017 and 2018 are viewed highly by DVOA, the actual trend, in my far less analytically-minded opinion (than the super nerds), is that 2018 was the proverbial switch flip. That’s when Allen and the rest of the Saints unit decided nobody was going to run on them anymore.

Looking at the numbers for 2021

The days of inconsistency between run and pass, and most metrics in general, are over for this defense. There’s really nothing they fail to excel in. Even from the first portraiture’s perspective, they’re one of the most dominant units in the league. Even the crayon eater is right about this defense.

Simply stated, there is no good-faith argument for the Saints’ defense being anything other than absolutely stellar.

Their drive stats tell a similarly elite story. They’re also ninth on third down and first in the red zone. But enough of all that. Let’s get into what the Saints’ defense looks like.

Even when things go awry, there is no more aesthetically-pleasing defense in the NFL. The Saints can play single-high Cover 1, and they play a ton of two-high man looks in a multitude of ways. They also can play in a two-high shell and drop a safety, spinning into Rip/Liz. In simplest terms, this means they play Cover 3, but each defender plays a man inside his zone responsibility instead of a “zone.”

Quite frankly, there are better resources than I for breaking down the intricacies of pattern-matching zone and man coverages. I became enamored by them as I worked on NFL Draft prospects in the 2020 cycle (particularly Nick Saban and Kirby Smart secondary members). But that was more based on an individual responsibility level than an overall philosophy.

I’m a relative infant in that world, so we’ll steer more towards why it works for the Saints’ defense better than most others trying to run a more advanced defensive system. For a great breakdown of their defense, check out Coach Vass on Youtube.

We’ll start by discussing a few of the base coverages we see from a pattern-matching team to understand the importance of the ingredients making the Saints so great. 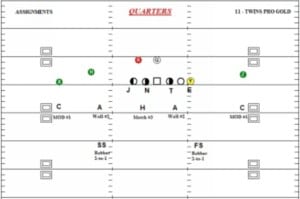 Quarters coverage gets discussed a lot at the college and NFL level. However, it’s essentially become the go-to call for any two-high match concept and has nearly replaced the archaic “Cover 4” call. We’re using it here not because it’s something the Saints run more than other coverages, but to exemplify how much communication goes into this kind of defense.

There is no shortage of variations of the 5×2 defensive alignment, including 2 Read, Mix, Bracket, Cover 5, Switch, Bronco, and many more. But let’s quickly discuss the above graphic.

“MOD” means “man other than drag,” simply meaning the cornerback is in man coverage unless the receiver goes underneath immediately. They then give an “under” call. The Apex, or slot defender, has #2 man-to-man unless they go vertical while they wall that receiver from releasing inside vertically. In that instance, they take the first receiver to the flats in man-to-man. If they hear an “under” call from the cornerback, the Apex reroutes #2 then covers that drag.

The Hook defender covers #3 in man-to-man if they release unless they are out fast and cannot get to them. Then, they make a “push” call to the Apex defender, and the Hook walls off #2. During all this, the safety is reading 2-to-1, meaning if #2 is vertical, they deal with that receiver in man coverage. If that receiver is not vertical, the safety robs the #1 receiver.

The Mike Nolan-led Dallas Cowboys defense of 2020 found out the hard way that you cannot simply install a coverage scheme with match-based principles during a COVID-condensed offseason program. The ability to efficiently communicate is imperative to the success of the passing defense, even at its most basic level of match-based coverages.

The reason the Saints are so good, aside from their raw physical talent, is their ability to be in the right place at the right time and the immediacy of their decision-making in coverage.

The above video is a fun play call by the Packers meant to overload the zone to the field side. Notice all the communication happening as Allen Lazard goes into motion. The Packers are going from a 3×1 formation to a 2×2. It looks like a play-action variant of a Levels concept, with the fieldside receiver trying to run both the cornerback and field safety off. The backside receiver runs a deep drag, and Marshon Lattimore drives to trail him.

Almost always in the right place

But instead of being fooled by the backfield action, they simply switch responsibilities seamlessly when Tonyan crosses the formation in the split-zone action. From there, it’s an athlete’s game, and Davis does a great job avoiding the attempted pick from Lazard.

Now, let’s peek at the back end. Lattimore drives across the field with Cobb. The field side cornerback carries the vertical route with out-and-up leverage. The field side safety drives on the deep drag, making it unviable, and Marcus Williams plays the post as the boundary safety.

Perfect harmony. It’s why the Saints’ defense is almost always in the right place no matter what they’re running. But how do they accomplish this?

In 2017, the Saints drafted Lattimore and Williams. Davis has been around for even longer. Gardner-Johnson is in his third season with the team, and P.J. Williams has been in New Orleans since 2016.

They rounded out their defense in 2021 with Alexander at LB — who is another veteran presence and in his second season in the system — and Malcolm Jenkins. He is the elder statesman of the defensive backs group at 34 years old. Paulson Adebo is the only “new” piece, and he’s going through a learning curve. He is, however, a Stanford product and an incredible athlete himself, giving the Saints the possibility of an actual complement to Lattimore they’ve never had before.

Defenses that live by match principles in the NFL are in a tough spot. The CBA limits team participation to the point where most teams air on the side of caution and simplicity. The “play simple, play fast” mantra lives in many NFL defensive coordinators. But that’s not enough with modern rules all benefitting offenses and passing attacks designed to melt Cover 3 and basic Quarters looks.

The Saints are to a point personnel-wise where each player is an extension of the one beside them. Gardner-Johnson and P.J. Williams are massive keys here because a lot is going on for Apex/Slot defenders in match-based schemes.

The X’s and O’s are only as good as the Jimmy and Joe’s on the roster. The Saints aren’t afraid to simply line up and play man-to-man against teams either. But for me, the most impressive aspect of their game is how they fit the run despite playing from a two-high shell quite often.

Their defensive backs FLY to the football, and each one smacks in the alley. It’s impressive to see Gardner-Johnson and P.J. Williams flying around making plays outside the tackle box. It’s even more amazing to see some of the gap exchangement the front seven uses.

Shy Tuttle appears responsible for the backside A-gap here, while Davis replaces Tuttle on the play side. However, Alexander dives down into the A-gap, and Davis scrapes over him and has a free lane where a wide run lane has formed for Playoff Lenny. With Tuttle’s strength and Alexander crashing, Ryan Jensen cannot climb to Davis scraping across like a madman. From there, it once again goes back to talent. Davis breaks down and makes the tackle for a minimal gain.

They also just cover their arses off. I have questions about how accurate ESPN’s player-tracking models are for identifying coverages, but Matt Bowen gave us some of the numbers recently in a tweet. The Saints defense, according to ESPN, runs more Cover 5 (Cover 2 man) than anybody else at 22% of their opponent’s dropbacks. That’s nearly 7% more than any other team.

Make no mistake, the Saints’ No. 1 priority is stopping the run and forcing teams to earn third-down conversions. But their scheme directly attempts to thwart the efforts of modern offenses in the passing attack. They’ve maintained a level of continuity that doesn’t usually exist on defenses. That continuity comes with elite-level players on the defensive line, at linebacker, and at cornerback. But it also comes with high-level complementary players.

Unfortunately, they are only a piece of the puzzle. Maybe if Jameis Winston never goes down with a season-ending injury, the Saints could have competed in the playoffs. If they can retain Marcus Williams and P.J. Williams while Pete Werner fills Alexander’s role at linebacker, this defense should travel into the top five again in 2022.