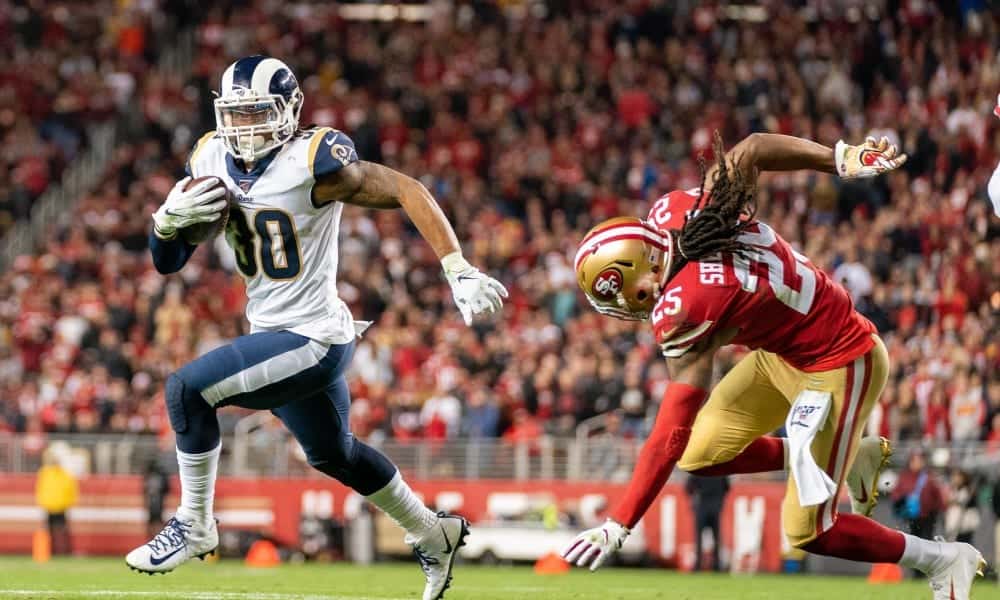 After five years as a member of the Rams organization, be that Los Angeles or St. Louis, that saw him score 70 touchdowns and rack up nearly 7,500 total yards, Todd Gurley has been released. The move comes on a day when the Rams had until 4 pm ET with which to move Gurley or be guaranteed to have to pay a further $10.5 million on his contract.

After discussions with other teams did not lead to a suitable outcome, the Rams decided to part ways with Gurley, despite the salary implications that would come with the move. Gurley will now head into the free agency market where questions are sure to focus on the health of those much-talked-about knees. Let’s take a look at the financial ramifications of Gurley’s release for the Rams, and what sort of contract he may be able to command on the current market.

To fully understand the financial implications of today’s move, it is important to understand the structure of Gurley’s contract. After being drafted with the 10th pick in the 2015 NFL Draft, Gurley signed a four-year $57.5 million contract extension in 2018. That extension included $21.95 million in guaranteed money at signing and meant that Gurley could have been under contract with the Rams until 2023. However, in each year of Gurley’s contract, more future money became guaranteed at various timepoints. For example, on the third day of the 2019 league year, his base salary for that season and his 2020 roster bonus both became guaranteed ($12.55M).

A similar situation was due to occur on March 19th of 2020, where, if Gurley was still on the Rams roster at 4 pm ET, his entire 2020 salary ($5.5M) and his 2021 roster bonus ($5M) would also become guaranteed. Ultimately, the Rams decided that they did not want to make that kind of commitment to a player who saw a significant dip in production in 2019.

While that $10.5 million in guaranteed salary was saved by releasing Gurley, the move does have cap implications. Gurley was due to count $17.25 million against the cap in 2020, but his release will actually mean that he counts $20.15 million instead. The reason for this is that the remaining $12.6 million of his prorated $21 million signing bonus is accelerated onto the cap this season, instead of just the $4.2 million that was originally meant to count. When you then add the $7.55 million roster bonus that was guaranteed back in 2019, the result is a $20.15 million cap number.

This leaves the Rams carrying a fraction over $23 million in dead cap space in total for 2020. Combine that with the $165 million that the top-51 earners on the roster count towards the cap, and the Rams salary cap number sits at $188.725 million, leaving them with around $15 million of current cap space.

The Gurley experience is a cautionary tale

Many teams will be looking at this move by the Rams today, and hopefully, they will all be taking notes. When the Rams selected Gurley in the first round of the 2015 NFL Draft, they gave themselves the ability to control him on a rookie deal for the first five years of his career. Instead, Gurley threatened to hold out entering his fourth season and seemingly forced the Rams to extend him with two of those years remaining. That has turned out to be a very wise move by Gurley, but it has cost the Rams dearly.

Gurley’s final year of that original rookie contract would have expired after the 2019 season, much like Melvin Gordon with the other Los Angeles franchise. However, the Rams find themselves now having to eat a huge amount of cap space in 2020 to move on from the one time face of the franchise.

Had Gurley played out his rookie deal, including the fifth-year option, then he would have been due a total of $12 million for the 2018 and 2019 seasons combined. Instead, the Rams have paid him a total of $33.5 million and put themselves under great financial stress in the 2020 season. It will be interesting to see if we are having similar discussions about Ezekiel Elliott’s contract at some point in the next couple of seasons. If we do, then we could see a lot more owners willing to let their star running backs hold out into the season in order to avoid having to swallow large chunks of money further down the line.

However, had Super Bowl LIII gone differently, and the Rams came home with the Lombardi trophy, the ending to this story would likely be looked upon in a better light. When the Rams made that deal with Gurley, they likely believed they could win the Super Bowl in 2018, and they were nearly right.

In this case, a relatively small margin of one game has potentially shaped how NFL history will view this contract for Gurley. Whether that will deter other teams who may believe they are on the cusp of challenging for a Super Bowl from committing big money to young running backs is an interesting subplot to watch. The changes to the CBA may change the face of the holdout element that we saw with both Gurley and Elliott, but it does not alter the question of whether to commit big money to the running back position.

Could Gurley command another big contract?

Those problematic knees are going to be a huge stumbling block for Gurley in securing another blockbuster deal. Whether it was due to the knee problems, general wear-and-tear, a diminishing offensive line, or simple regression, Gurley’s numbers took a big hit in 2019.

Gurley also ranked just 28th at the running back position when it came to Pro Football Network’s Offensive Share Metric. The metric shines a light on the true performance of an individual and is based on factors solely within their control, allowing us to see when a player has done all he can to make his team great.

As we can clearly see with his 28th ranking, Gurley was nothing more than an average running back in 2019, which makes it hard to make a case for anyone paying him significant money in the coming weeks. 54 touchdowns in the last three seasons will certainly make a good case, but the declining numbers in 2019 should set off alarm bells around the league.

A final reason for concern is Gurley’s reduced impact in the passing game in 2019. Coming off two seasons in which he was targeted more than 80 times per season, Gurley saw just 49 targets in 2019. Additionally, his catch rate dropped from being consistently above 70% in his career to 63% last season. On top of that, Gurley posted a career-low in yards per reception, yards per game, and yards per target in 2019. These numbers further indicate that Gurley is not the same offensive force he was even as recently as 2018.

There will almost certainly be a team willing to gamble that Gurley can bounce back in 2020, but the most likely outcome is that any contract signed by Gurley being a short-term prove-it deal.