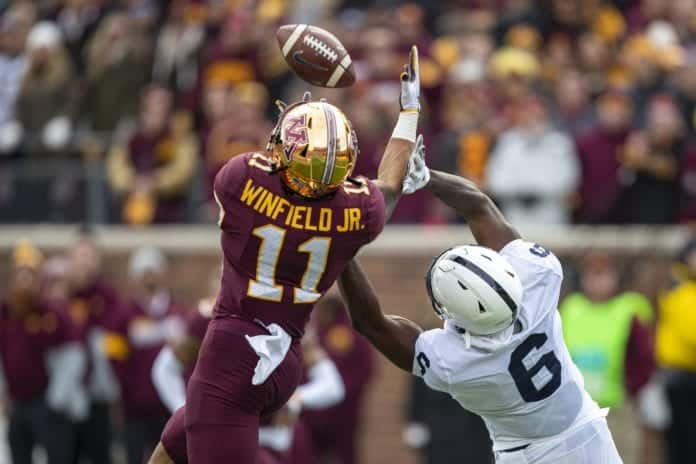 “Are you going to follow in your fathers footsteps?” A sentence Antoine Winfield Jr. has likely hear his entire life. Some people named after their father feel some resentment towards their namesake. Not Winfield Jr. Over twenty years after his father won the Jim Thorpe award as the nations top defensive back, Winfield Jr. will look to continue the family legacy. He has a real shot, too. He’s second in the nation with seven interceptions, and has played his best football when his team needed him most. Antoine Winfield Jr.’s draft stock has been rising all season.

Winfield grew up in the state of Texas where he played high school football at The Woodlands High School. He was an excellent football player, but never stood out as an elite prospect. He was viewed as a three-star prospect, and no one was sure on if he was a safety or cornerback at the next level.

Despite very impressive athletic testing, many big-time schools were scared by Winfield’s lack of size. He was listed as a generous 5-10, but played bigger. Could his body last? Was he big enough to make a difference? Winfield chose to attend the University of Minnesota over schools like Eastern Michigan and Houston, in order to answer those questions.

As a true freshman, Winfield Jr. played in 12 games, starting in an impressive 9. He recorded 52 tackles, 3 pass deflections, a fumble recovery, and an 82 yard pick-six. He far outperformed his expectations as a three-star true freshman, and was an immediate contributor to the team. He was named to the Big Ten Network All-Freshman team, and was expected to be a major contributor for the coming seasons.

In his second season at Minnesota, there were a number of flashes that led many to believe that Antoine Winfield’s Jr.’s draft stock was rising. He played in the first four games before missing the final 8 games due to an injury suffered in the Maryland game. Prior to the game, he had flashed highlights, including a blocked field goal, a sack, and two pass deflections.

In his third season, many were ready for the breakout year that would skyrocket Winfield Jr.’s draft stock. Early in the season, it was evident that he was something special. After Minnesota routed New Mexico State, they went on to face then-ranked No. 18 Fresno State. It was a gritty game, with Minnesota going up by 7 in the fourth quarter. Fresno would lead a late game drive all the way all the way down to the 4 yard line. Then, magic. Winfield Jr. sealed the game with one of the most impressive interceptions I’ve ever seen in my life.

Insane how Antoine Winfield Jr. had two game-clinching INTs, both in the end zone, both against Fresno State in back-to-back seasons.

Then, disaster struck again. Winfield Jr. lost his season against Maryland again. Months of recovery, playing at a new level, leading his team to a 3-0 start, all down the drain. Winfield Jr.’s draft stock took a major hit. Could he stay healthy, was his size and play style simply too different to succeed? These would become questions he’d have to answer not just then, but now as well.

After all these injuries, all these questions, how would Winfield Jr. respond? Well, he answered those questions with a blazing brightness. Through 9 games this season, he’s been healthy, and has played the best football of his life. The starting point of his dominance this season? Week 2 against Fresno State, where he recorded the game-sealing interception. You may be wondering, “did he have a typo somewhere? I could’ve sworn he already said that about last year’s game”. That’s because I did. In back to back seasons, Winfield Jr. would win Minnesota the game by making a game-sealing interception against Fresno State.

He wouldn’t stop there, either. To this point in the season, Winfield Jr. has recorded 7 interceptions and 57 tackles. He’s been the best safety in football and has a legitimate chance at winning the Jim Thorpe award; the same award given to his father almost exactly 20 years ago. If Winfield Jr. can finish the season strong, he would be the player I’d vote for as the best defensive back in all of college football.

Antoine Winfield Jr.’s draft stock is currently the highest it’s ever been. After his two interception performance against Penn State, many are starting to see him for what he is: A top five safety in this draft class. He lacks elite size, but makes up for it with solid technique and athletic ability. He has the speed to play in any coverage, but is a sure enough tackler and strong enough at the point of attack to play at the line of scrimmage. Add on his elite ball skills, and you’ve got quite an intriguing prospect. The medical history is worrisome, and his size stems questions. However, Antoine Winfield Jr.’s draft stock has been skyrocketing all season. If he continues to play at the level he has, then first-round consideration could become a real possibility. I currently grade Winfield Jr. as a top five safety prospect, and a second-round player.