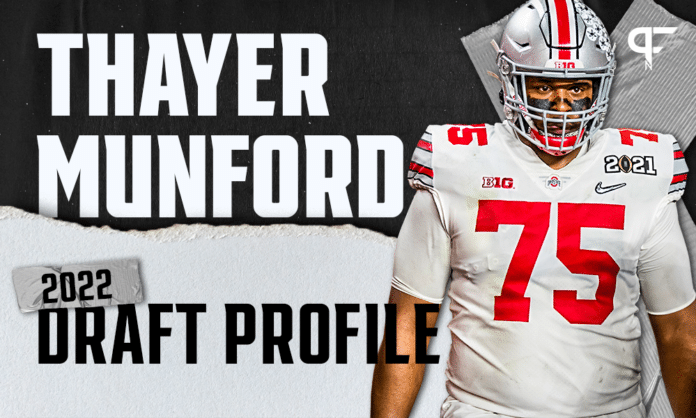 The Buckeyes have a long history of production on the NFL Draft circuit. The NFL is littered with Ohio State linemen. Can Ohio State OT Thayer Munford join that group and bolster his 2022 NFL Draft scouting report in the 2021 season? What does he bring to the table, and what does he need to improve?

Now in his fourth year as a starter, few offensive linemen have the sheer experience that Munford has. He started from 2018 to 2020 as a tackle and now mans the left guard spot for the Buckeyes in 2021.

Munford could have entered the 2021 NFL Draft as a true senior, but the Ohio State OT returned to school for another year. It was a surprising move, given that Munford — a Senior Bowl invite — could have commanded middle-round interest. But perhaps Munford wants to boost his stock a bit more. Does his NFL Draft scouting report have remaining upside?

Right away, Munford stands out. Standing at 6’6″, 320 pounds, he’s a massive human being with a wide reach. That elite size is a big part of what makes his game so steady. With his wide reach and sturdy frame, Munford can be hard to move.

Beyond size alone, however, his gigantic measurables allow for effective applicable use. The Ohio State product has an elite wingspan that carries a great deal of natural strength and leverage. His length can be a great conduit for power in multiple phases. It can drive up the power of his punches as a pass blocker. Meanwhile, in the running game, Munford can use his length to anchor and direct players across the field.

Munford has the strength to punish rushers who sacrifice their balance by trying to bend and sink under his frame. Moreover, he has decent recovery athleticism for his size, as well as measured straight-line burst. The Ohio State OT likely won’t test as an elite athlete, but he has enough mobility to get by on the interior. And in a phone booth, his physical profile is imposing.

Munford’s size alone presents a challenge for defensive linemen, but the Buckeye has much more utility beyond that. As you might expect from a four-year starter, he has an impressive amount of refinement in his game coming out of college.

Munford’s hands are prevalent in his game. While he can further refine his usage a bit, his hands are clearly very calculated in pass protection. He hones in and counters rush moves with ease and can react quickly to moves that stack on top of one another. While they may not always be overly powerful, they are fast. Meanwhile, Munford’s hands and feet work well together, and that synergy keeps him balanced.

Going further, the Ohio State OT has strong footwork when encountering pressure. He keeps a wide base and keeps his feet active when awaiting the rush. When imbalanced, he can stay upright and recover. He doesn’t bend much at the hips, and he possesses some definite flexibility and absorption capacity. Munford also plays with good lean and pad level, particularly in pass protection.

Among other things, Munford has an active help mentality on the interior. He keeps his eyes up, stays alert, and triggers when he sees breaching rushers. Furthermore, he has the versatility to play tackle and guard — something NFL teams will value.

While Munford is a relatively refined prospect, he does have room for improvement. Further refinement is still a need, and his overall athleticism does raise a few questions.

Starting with his physical limitations, Munford shows stiffness as a lateral mover at times. He doesn’t always have the mobility to acquire the right angles as a run blocker in space. He also doesn’t have great change-of-direction ability when he needs to divert course. The Ohio State OT can get beat initially by more explosive defenders, and his offensive punches don’t always strike cleanly, minimizing the power generated.

Munford can better place his anchors at times. His grip strength doesn’t stand out as elite, as he doesn’t always latch on with his punches. His anchors are susceptible to rip moves. He can lose his balance against opposing power and by reaching before properly positioned. A tall player like Munford can’t play past his center of gravity.

Finally, Munford can leave his torso open at times, making him vulnerable to bull rushes. That opposing power, when properly channeled, can be hard for him to deal with.

After scouting both Munford and teammate Nicholas Petit-Frere, it’s clear that Petit-Frere is a better NFL prospect. That’s a high bar for Munford to clear, though. Petit-Frere might legitimately be a Round 1 talent. Munford isn’t quite at that level.

Munford is still a good player. He has some minor operational inconsistencies, but more often than not, he’s a steady blocker with good balance, size, power, and hand usage. He’s not a great athlete, but he has the baseline mobility to function. And on the interior, where short-range blocking is more prevalent, he can shine.

Munford is likely a Day 2 prospect at best. His athleticism will cap his upside outside of Round 1. But in the middle rounds, the Ohio State OT translates well to the interior in the NFL. There, he could be a multi-year starter in power-oriented schemes. He may be somewhat limited as a motion blocker, but he has utility nonetheless.

There’s a certain level you have to reach as a prospect before you’re pursued by the Ohio State Buckeyes. Munford exceeded that threshold in 2017 when he was a highly-regarded four-star recruit out of La Salle High School in Cincinnati, Ohio.

Munford was already a massive human being, standing at around 6’6″, 343 pounds. He also had decent early testing numbers for his size — among them a 5.54 40-yard dash and a 24-inch vertical. Munford fielded offers from Alabama, Iowa State, Kentucky, Penn State, and Cincinnati. But with Ohio State, Munford had a high-level developmental opportunity in-state — he couldn’t pass that up.

At Ohio State, Munford got the chance to learn from renowned offensive line coach Greg Studrawa. It wasn’t long before Sturdawa’s teachings started to catch on. Munford suited up as a true freshman, playing 202 snaps on offense for the Buckeyes. That preview was enough for coaches to give him an extended role in 2018.

Munford entered the starting lineup in 2018. As it turns out, he hasn’t relinquished his starting job three years later. Through grueling Big Ten play, the College Football Playoffs, and National Championship runs, Munford remained Ohio State’s rock at left tackle. He’s played in 45 of 50 potential games over the course of his career, and he’s started 33 games since 2018.

2021 presented a change for Ohio State’s rock, however. Regarded as one of the best offensive tackles in the country after keeping the blindside clean for both Dwayne Haskins and Justin Fields, Munford suddenly slid inside to left guard, while the highly-touted Petit-Frere made the move from right tackle to left tackle.

Thus far, the change has gone well for Munford, who’s looked steady on the interior. Guard seems to be a better fit for him, and NFL evaluators may ultimately come to the same conclusion when the 2022 NFL Draft rolls around.