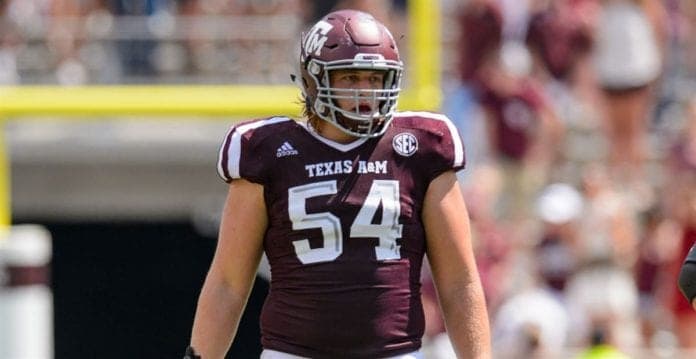 The Texas A&M Aggies have a pair of offensive tackles atop my board, but both need a lot of work on their games. This includes Carson Green and Dan Moore Jr.

The Texas A&M Aggies are a program in transition as they move into the second season of the Jimbo Fisher era. Texas A&M had a pair of players selected on the second day last April, but they will need a miracle to match that in 2020. The Aggies have a pair of offensive tackles atop my board, and both have upside but need a lot of work on their games.

Texas A&M will open their season against Texas State but won’t have much time to rest as they’ll take on Clemson in Week 2. They’ll then host Lamar before another big game against Auburn. They’ll then take on Arkansas before hosting Alabama. As you can see, they have a gauntlet of a schedule in the first half of the season.

Their next few weeks are a bit tamer, but they’ll close the last two weeks with games against the Georgia Bulldogs and LSU Tigers. With prospects such as Carson Green and Dan Moore Jr., they’ll be able to compete. But can they knock out some of the big dogs? Time will tell.

Texas A&M right tackle Carson Green is a nimble lineman who bends his knees and blocks with solid fundamentals. He easily moves around the field and is very effective blocking in motion, but he must improve the strength of his base.

Texas A&M left tackle Dan Moore Jr. is a tackle with guard size. He shows nice athleticism and mobility like his teammate, but he must improve his run blocking. I could see Moore eventually kicking inside at the next level.

Note: This table has already been filtered for the Texas A&M Aggies Prospects prospects. To view other prospects that I have graded, use the drop-down lists below to filter the table.