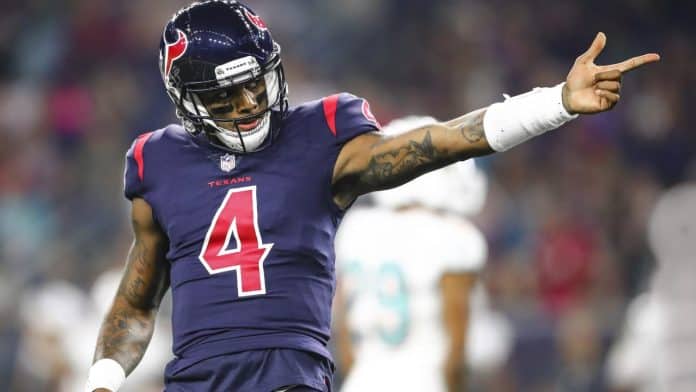 Texans risk wasting yet another year of Deshaun Watson in 2020

By Mike Tanier
August 31, 2020
What's in this article? Click to show
The Houston Texans and their variety of outcomes
Deep Dives
Without Hopkins, who else is worth a pick in fantasy football
The bottom line for the Deshaun Watson and the Texans in 2020
Houston Texans 2020 Prediction

The Texans’ fortunes typically rise and fall based upon the health and availability of three-time Defensive Player of the Year J.J. Watt, the quality of quarterback Deshaun Watson’s protection and weapons, the stiffness (or flaccidity) of the AFC South competition, and most importantly upon the mood swings of head coach/general manager/benevolent (??) despot Bill O’Brien. The 2020 season will be no exception.

Watt enters the season healthy after missing half of 2019 with a pectoral injury. The Titans are the only serious threat in the division, and they aren’t as threatening as they think they are. Recent O’Brien decrees have resulted in about as much talent coming (wide receivers Brandin Cooks, Kenny Stills, and Randall Cobb, running back David Johnson) as going (wide receiver DeAndre Hopkins, running back Carlos Hyde, defensive tackle D.J. Reader).

With their top-heavy lineup and O’Brien’s seat-of-the-pants leadership style, the Texans are once again uniquely built to jump out to a 24-0 playoff lead against the Chiefs, then lose by 20 points, then do it all again next year.

The Houston Texans and their variety of outcomes

Cooks, Stills, Cobb, and Will Fuller make the Texans receiving corps less of a one-man band than it was with Hopkins. The offensive line continues to develop, with left tackle Laremy Tunsil as its anchor. Some new stars emerge on defense to complement Watt and Whitney Mercilus. The Texans enter the playoffs as a complete, consistent team instead of four superstars leading a roster cobbled together by a mock draft simulator.

The offensive line remains pretty unreliable. Despite some solid pieces (Bradley Roby, safety Justin Reid), the secondary relies too heavily on reclamation projects Vernon Hargreaves and Gareon Conley. Watson endures another regular season in which he suffers six sacks to some weak opponents (see Week 4 against the Panthers last year), while the defense sometimes gets scorched for 38 points by some rookie quarterbacks (Drew Lock and the Broncos, Week 14), Yet the Texans make it into the playoffs again, giving O’Brien another year to play emperor.

Hopkins was targeted 150 or more times in each of the past five seasons. Only seven other receivers have been targeted 150-plus times in five or more seasons since 1992 (when target data becomes reliable): Chad Johnson, Hopkins’ former teammate Andre Johnson, Cris Carter (five seasons each); Jerry Rice, Brandon Marshall, Antonio Brown (six seasons each); and Hopkins’ current Cardinals teammate Larry Fitzgerald (nine seasons).

That role in the passing game will be difficult to duplicate. Cooks, Stills, and Fuller are deep threats, Cobb an aging slot target. It’s not clear who will replace Hopkins as the possession guy who catches intermediate passes in traffic.

Linebacker Zach Cunningham, who just got a four-year, reported $58-million contract extension, finished second in the NFL in solo tackles with 99 and led the league in tackles short of the first down with 85, per Sports Info Solutions. Cunningham is a fine defender between the tackles but is less effective in coverage or playing in space.

He also got a boost from playing behind top run-stuffing defensive tackle D.J. Reader, who signed with the Bengals as a free agent. The Texans ranked 26th in Football Outsiders DVOA last year and need some new playmakers to emerge. See the next bullet point for more details.

O’Brien picked up former first-round cornerbacks Conley and Hargreaves to patch a leaky secondary in the middle of last season, and with Jonathan Joseph gone (Titans), both are slated to play major roles in 2020. Conley fared well last season, but Hargreaves finished third in the NFL with 54 completions allowed and gave up six touchdowns.

Tunsil was a stabilizing presence on the offensive line even though he missed two games with a shoulder injury and led the league with 12 false starts (and three “ineligible man downfield” fouls, a sign of less-than-detail-oriented coaching). The Texans are hoping for second-year linemen Tytus Howard and Max Scharping to step forward after hot-and-cold seasons last year.

Pro Football Focus charges 19 of Watson’s 44 sacks in 2020 to Watson himself; no Texans lineman was charged with more than three. Mobile quarterbacks often hold the ball too long then get sacked before they can escape. Watson was sacked an NFL-high 10 times on third-and-10 plus, evidence that Watson was often sacked when he was forced to try to make too much happen.

Without Hopkins, who else is worth a pick in fantasy football

Which Johnson should be on your team?

Last year, Duke Johnson was credited with 33 eluded tackles on just 127 offensive touches. He also recorded 15 offensive gains of 15-plus yards in limited use.

Johnson will split touches with former Cardinals featured back David Johnson, which is bound to cause some confusion. Duke is an RB3 or RB4 in PPR leagues but a just a talented handcuff/leech in leagues with traditional scoring systems.

David is getting fourth-round ADP attention even though his upside appears to be a repeat of his 940-rushing yard, 50-catch, 10 touchdown 2018 season (his 2016 performance is gone forever, folks). I’d stay away from Texans running backs altogether; O’Brien is likely to trade a mid-round pick at the deadline for someone like Jordan Howard, anyway.

O’Brien as the general manager is too impatient to manage the salary cap and hasn’t figured out how to acquire a talented player without giving away a horde of starters and/or draft picks. O’Brien as the head coach is too clever for himself by half, over-engineering offensive plays (it sometimes looks like Keke Coutee goes into motion around the entire stadium parking lot before the snap) and veering from arch-conservative decisions (let’s settle for three on 4th-and-1 from the 13-yard line) to ultra-risky ones (FAKE PUNT!!!) from series to series.

The Texans themselves have matched O’Brien’s personality for most of the last six seasons: mercurial, occasionally brilliant, rarely boring, prone to step on every rake lying in the garden path, totally incapable of beating better-run teams like the Patriots or Chiefs in the postseason.

This is O’Brien’s last season before Watson gets his grown-up contract. Watt has had one healthy season in the last four. Mercilus turned 30 in July. The 2020 season should be the Texans’ all-in year, but a series of short-sighted trades have left them with a second-class roster.

The Texans run the risk of squandering a Super Bowl window by pretending it was a success because of some 11-5 and 10-6 seasons. Team ownership will eventually figure this out. For now, O’Brien gets to be his own boss. No matter how moody he gets, he’s unlikely to fire himself.