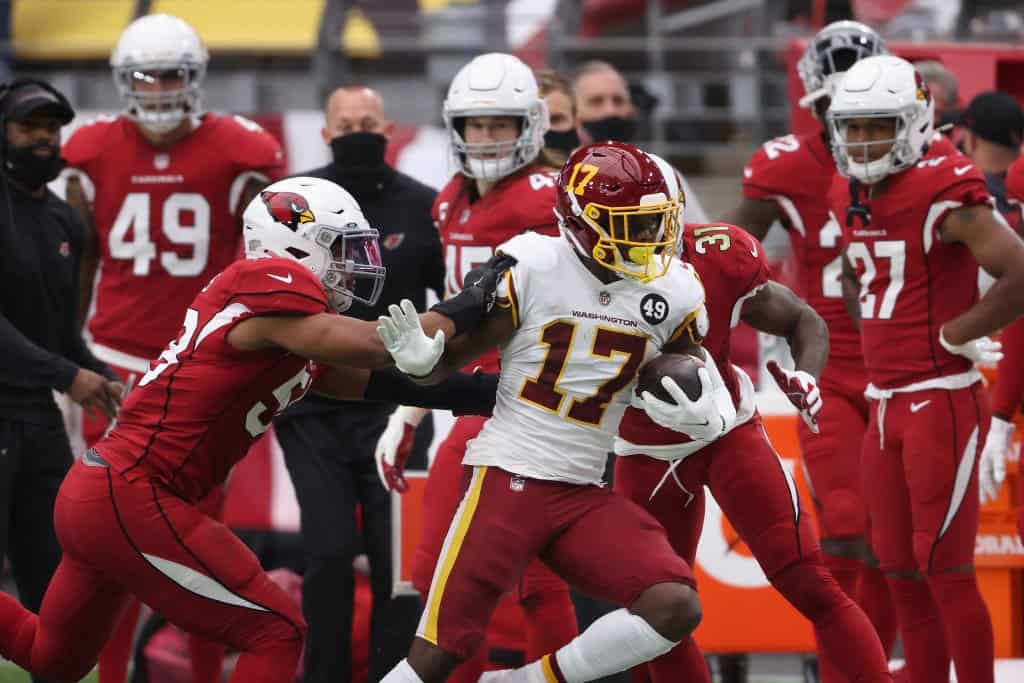 (Photo by Christian Petersen/Getty Images)
What's in this article? Click to show
McLaurin received an elite OVM grade in Week 2
McLaurin has been Washington’s best player all season
How will McLaurin’s success affect the team going forward?

Terry McLaurin had a stellar performance in Week 2 against the Arizona Cardinals, catching seven passes for 125 yards and a touchdown, accounting for more than half of Washington’s total receiving yards. PFN’s Offensive Value Metric (OVM), which measures how valuable a player was to their offense, also rated McLaurin highly, giving him one of the best grades of his career so far. Which makes it somewhat unfortunate that his team failed him so catastrophically.

Although the Washington Football Team scored 27 unanswered points to overcome an early 17-point deficit against the Philadelphia Eagles in Week 1, they found themselves unable to muster a similar comeback. The defense was unable to handle Arizona’s budding star Kyler Murray, either through the air on the ground, and the offense didn’t start scoring until it was far too late.

However, McLaurin managed to excel despite the rest of the roster giving him little to no help, putting together a truly impressive performance.

The OVM gave McLaurin a grade of 47.44, the second-highest of his young career, and the highest received by a Washington player in Week 2 by more than 20 points. A grade that high indicates that McLaurin wasn’t just statistically successful last week, but he also produced those statistics in an extremely efficient manner, a rare and effective combination.

Frequently, you will see wide receivers gain a lot of yards but do so in a highly inefficient manner, essentially wasting many of their targets. McLaurin did not fall into this pattern; he was targeted a great deal against Arizona, but he made those targets count.

Explaining why the OVM rated McLaurin’s performance so highly isn’t especially difficult. His statistics that go into calculating a wide receiver’s grade were solid across the board. Let’s get the less impactful metrics out of the way first: the amount of separation he created and his catch percentage.

McLaurin was targeted 10 times against Arizona. Across all of those targets, he averaged 3.4 yards of separation, which was above average for the week for qualifying wide receivers. His catch percentage of 70% ranked similarly.

Given how heavily McLaurin featured in Washington’s offense against Arizona, those slightly above average numbers are more impressive than they might seem, as he should have been the Cardinals’ primary defensive focus. However, on their own, they wouldn’t result in a grade as astronomically high as the one he received.

Which brings us to the statistic that pushed McLaurin’s grade over the top from average to excellent: his yards after the catch (YAC). Against Arizona, McLaurin averaged 12.2 YAC, a staggering number. It’s easy to be successful when you gain more than a first down’s worth of extra yardage after catching the ball. However, that statistic alone doesn’t fully grasp McLaurin’s excellence with the ball in his hands.

The NFL, using multiple different factors, determines the number of yards that a player should have gained after catching the ball. According to those calculations, McLaurin’s averaged six more yards after the catch than he should have. In other words, about half of McLaurin’s post-catch yards were gained as a result of his own ability, rather than offensive planning or defensive incompetence.

Put all of the above statistics together, and you get a player who created separation from defenders, caught the ball consistently, and was virtually unstoppable after the catch. You can’t ask for much more from a wide receiver.

McLaurin has been Washington’s best player all season

Interestingly, this was the second week in a row that McLaurin was Washington’s most valuable offensive player. His Week 1 grade was significantly lower, at 33.57, but it was still the highest on the team by more than 13 points. Washington managed to win that game, helped significantly by their defense shutting down Philadelphia in the second half, but McLaurin was the only offensive player who pulled his own weight.

While that reflects well on him, it is a worrying trend for the team going forward. It isn’t an unfixable problem; near the end of last season, quarterback Dwayne Haskins was playing at a much more efficient level than he is currently, so it is entirely possible that he rebounds at some point in the near future. For the moment though, McLaurin is carrying the offense by himself.

How will McLaurin’s success affect the team going forward?

Unfortunately for Washington, as impressive as McLaurin was in Week 2, a wide receiver cannot win games on their own. McLaurin could be the greatest wide receiver in NFL history, and Washington might still lose every game for the rest of the season (Calvin Johnson Jr. and the 2008 Detroit Lions proved that rather conclusively).

However, if McLaurin can continue to play at a level he showed in Week 2, and the rest of the roster steps up to help him, Washington might be a legitimate playoff threat, especially in a division that isn’t looking particularly strong at the moment.

That help could come in the form of improvements from other offensive players like Haskins, or from the defense playing like they did in Week 1 on a consistent basis, or (in an ideal world) both. Even if none of those things happen doesn’t happen though, Washington fans will at least be able to find some small amount of comfort in knowing that McLaurin is shaping up to be one of the best young wide receivers in the NFL.