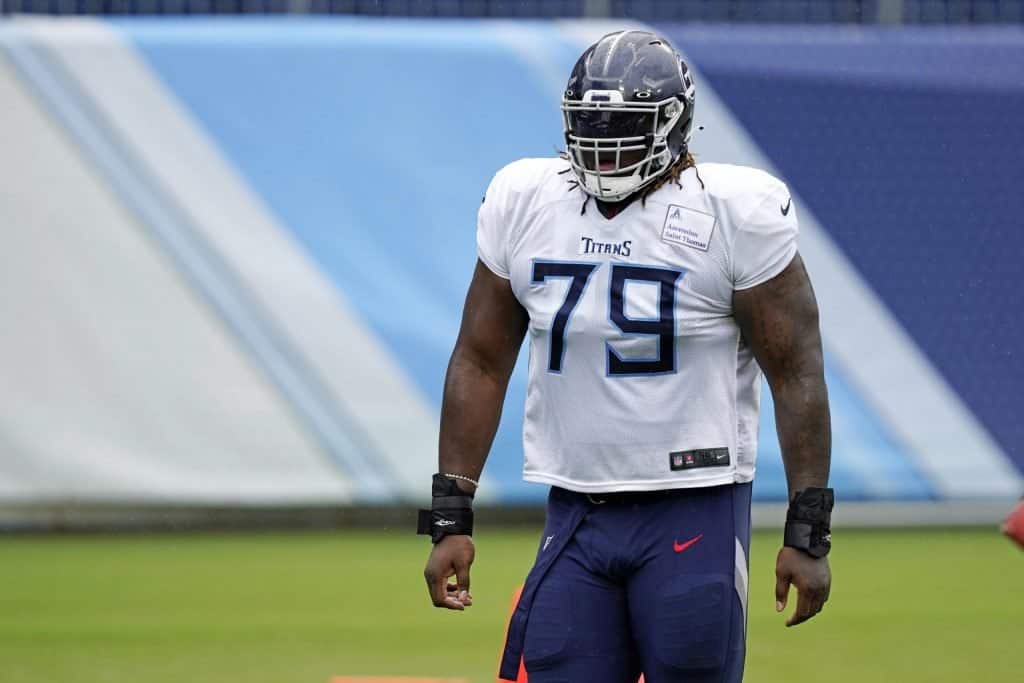 By Ben Rolfe
March 1, 2021
What's in this article? Click to show
The relationship between Isaiah Wilson and the Titans appears to be strained
Wilson is a talented player, but these character concerns are not completely unexpected
The end for Isaiah Wilson in Tennessee could be coming soon
Isaiah Wilson’s contract, salary, bonuses, and potential dead money
Want more NFL news and analysis?

After being selected 29th overall by the Tennessee Titans in the 2020 NFL Draft and signing a four-year contract, Isaiah Wilson appears to be on his way out of Tennessee after just one year. With the situation between the Titans and Wilson deteriorating, Pro Football Network’s Chief Draft Analyst Tony Pauline discussed the latest news on both the February 18th and 23rd editions of the Draft Insiders show.

Immediate success from a first-round selection is not always a guarantee. However, it is not often that the relationship between a team and a player disintegrates inside a year, at least not to the point that the current situation between Isaiah Wilson and the Tennessee Titans has.

“We put him on the reserve/non-football injury list and haven’t spoken to him since. He’s going to have to make a determination on whether he wants to do what it takes to play pro football. That will be on him. I know what the expectation level is here, and it’s no different than any other player on the football team. We have a certain standard that we want players to prepare and perform at professionally, and as people, and there’s a lot of work to be done there.”

Around a week later, on February 22nd, Isaiah Wilson commented publicly on social media. Wilson posted a tweet on Monday which said he was “done with football as a Titan.” Wilson has since deleted the tweet. However, the Titans and Wilson appear headed towards a separation sooner rather than later.

Since his selection in the first round of 2020, things have not gone well for Isaiah Wilson. Wilson found himself on the reserve list twice during the season. More concerningly, he found himself in legal trouble a couple of times.

Isaiah Wilson received a warning for trespassing when Tennessee State University Police broke up an off-campus party during Tennessee’s training camp. Wilson was documented as having been on a second-floor balcony and appeared to be considering jumping. He was arrested and charged with a DUI in September of 2020. The incident saw Wilson lose control of his car and strike a concrete wall.

Wilson is a talented player, but these character concerns are not completely unexpected

During the 2020 NFL Draft process, there were expectations that Isaiah Wilson would go in the first round. When it comes to his talent on the field, there is no questioning his talent. Pauline discussed the positives surrounding Wilson’s game on the show.

“The guy was a terrific player. He is a terrific, talented right tackle. He had two outstanding seasons at Georgia. If you go back and watch that Notre Dame game from 2019, Notre Dame basically controlled the tempo of that first half when Isaiah Wilson was not playing in the first half. Isaiah Wilson came in in the second half of that game, and basically shut down the Notre Dame pass rush on the right side. Georgia goes on to win that game, and Wilson, as a right tackle, was a major impetus to get Georgia to win that game.”

Pauline discussed how Wilson was a player that garnered much debate during the build-up to the 2020 NFL Draft.

“I also said multiple times in podcasts leading up to last year’s draft, that there are plenty of red flags, primarily personality issues that teams were concerned about. There were a number of teams across the league that had removed Wilson from their draft board completely because of these personality red flags.”

While Pauline did not name the teams who took Wilson off their board, he did shine a light on the Titans’ situation.

“The Tennessee Titans were not one of them. In fact, Tennessee saw no problems with Wilson, they had no red flags at all. It wasn’t a situation where Wilson fell into their laps, they knew about some issues with Isaiah Wilson, they said you know we are going to roll the dice, take some chances with him because he is so talented. That wasn’t the case. They thought he was great value. He checked off all the boxes, and there were no issues as far as the Tennessee Titans were concerned.”

The end for Isaiah Wilson in Tennessee could be coming soon

On the February 18th episode of Draft Insiders, before Wilson’s infamous tweet, Pauline revealed that the Titans were almost ready to decide on his future with the franchise.

“What I am hearing right now is that there could be a decision sooner rather than later on Isaiah Wilson by the Tennessee Titans. If they feel they can get out of their Year 2 and 3 guarantees, they may just outright cut him. There are people telling me they will outright cut him.”

Pauline went on to add that he hopes the Titans can come to a decision where Wilson gets more time with the franchise.

“I hope they don’t, and I hope for Isaiah Wilson the light goes on because he is an incredibly talented guy. He has starting potential and was the guy who was supposed to be the guy to replace Jack Conklin for the Tennessee Titans at right tackle. In fact, I think he is more talented, at least he is more athletic than Jack Conklin. It would be a waste of talent.”

However, the NFL is a business, and money could eventually be the deciding factor in Wilson’s time in Tennessee. If the Titans cannot void the guarantees in his deal, they may decide to keep Wilson around. Let’s take a look at Isaiah Wilson’s contract situation and the impact of releasing him.

On the February 23rd episode of Draft Insiders, Tony Pauline discussed how there could be a slim market for Wilson if the Titans release him.

“Wilson’s tweet said, ‘I am done with football with the Titans.’ It’s kind of prophetic because if he’s done with the Titans because as I said last week, there are a lot of teams who took him off their draft boards. So, I don’t know that there is going to be a big market for Isaiah Wilson if the Titans cut him.”

As the 29th overall selection in 2020, Isaiah Wilson signed a four-year contract. The total value of Wilson’s contract is $11.6 million. Of that money, $11.2 million is fully guaranteed. Wilson received a signing bonus of just under $6 million. The remaining $6.6 million consists of his base salary, with $5.2 million in guarantees.

In terms of salary cap hit, Isaiah Wilson’s contract ranges from $2.1 million in 2020 to $3.7 million in 2023. Of that, $1.5 million each year consists of the prorated signing bonus, with the remainder being his base salary. Given the prorated signing bonus and current guarantees, releasing Wilson now would leave $9.06 million in dead money. Therefore, releasing Wilson would actually increase his cap number by $6.4 million.

The caveat is if the Titans can get the guarantees voided. The Titans can make the case that Wilson’s behavior constitutes conduct detrimental to the franchise. Doing so would significantly reduce the dead money left by Isaiah Wilson’s contract. If that is the case, releasing Wilson would leave just $4.5 million in dead money in 2021. That would still be an increase in his cap number of $1.9 million. However, it is significantly better than it could have been.

The 3 best NFL Week 2 picks against the spread

Will Fuller (personal reasons) out Sunday vs. the Buffalo Bills