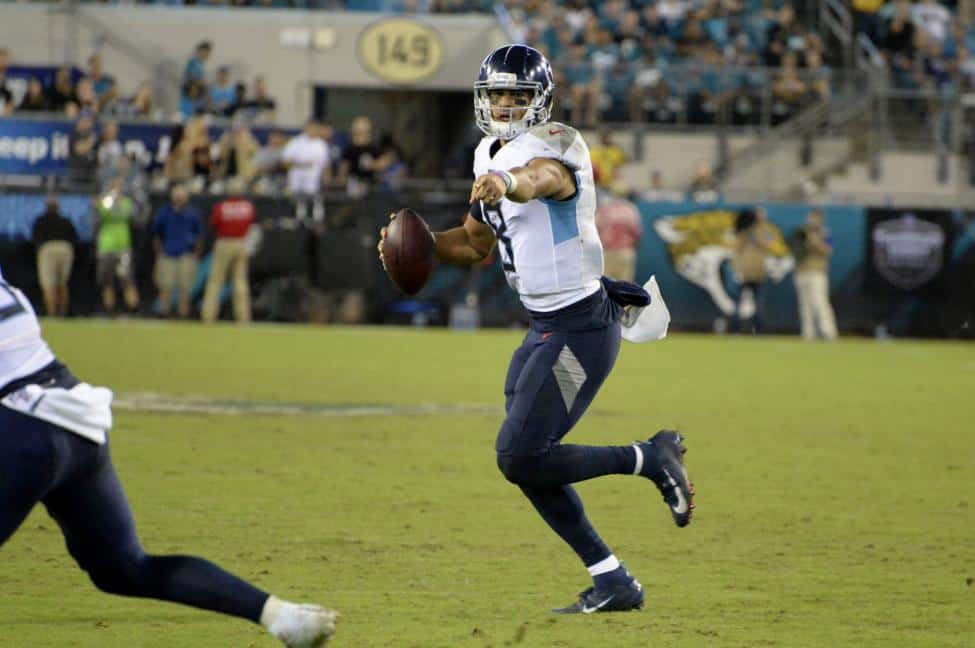 It has been almost five years since the Tennessee Titans quarterback Marcus Mariota was selected with the second overall pick in the 2015 draft. Many were encouraged by his accuracy, athletic ability, and decision making with the football. Mariota started his career off with two outstanding seasons. Many thought he could be one of the league’s new upcoming young stars. However, after some injury-plagued seasons, Mariota’s development stalled. Many hoped for a big 2019 for the young signal-caller.

That leaves us where we are today. Mariota has never been criticized as a quarterback that turned the ball over; he’s usually very safe with the ball. One of the biggest complaints from the Titans’ fan base has been that Mariota takes too many easy throws. Mariota’s cautious approach meant the offense consistently failed to put together drives.

Tannehill provided an instant spark and almost brought the team back to victory, completing 13 of 16 passes for 144 yards and an interception. Tannehill gave guys a chance to make plays and it was clear the offense ran smoother under Tannehill’s guidance.

Following Sunday’s game, when asked about Mariota’s regression during his tenure, Vrabel replied, “I guess I am just not a very good coach.” The pair has yet to see prosperity, and Vrabel is noticeably upset by the failures of his quarterback.

Mariota has been a Titan fan favorite, and his laid back personality makes it easy to root for him. Following Week 6 of the 2019 season, it looks as if the former Heisman Trophy winner has started his last game in Tennessee.

After Monday’s practice, Vrabel announced, “I think a decision will be made this evening or tomorrow, and we’ll let everybody know, we’ll let the players involved know, and let the team know and then let you guys know. I just want to make sure we are going through everything that we need to go through and what we are doing offensively, and not use the emotion of the game to make a decision.”

It’s wise that Vrabel is waiting to announce his starting quarterback for the Week 7 matchup with the Los Angeles Chargers. It is often a difficult decision and one that has a lot of impact on a locker-room. That said, I expect Tannehill to be the new starting quarterback going forward. If Vrabel plays Mariota, Titans fan could be in for another disappointing weekend. On the season, Mariota has put up an OSM grade of just 20.47, and this past Sunday, he graded out with a -1.79.

In fact, it has now been confirmed by a number of sources that Tannehill will be the starting quarterback this week.

The #Titans are making a QB change. Ryan Tannehill has been informed he’ll get the start Sunday against the #Chargers, sources tell me and @TomPelissero. Former No. 2 overall pick Marcus Mariota goes to the bench.

With the 28th ranked offense and the 29th ranked passing attack in football, it could be time for Tennessee to move on from their former first-round pick. Luckily, the Titans have one of the NFL’s best back-up quarterbacks in Tannehill.

Tannehill was let go by the Miami Dolphins for never having that big, franchise quarterback moment. He won a fair amount of games in South Beach but never could seem to get the team over the hump. Tannehill possesses a very similar skillset to Mariota. If Vrabel decides benching Marcus Mariota is the right move, Tannehill’s athletic ability would allow the Titans to run, for the most part, the same offense. The Titans will be hoping Tannehill can provide that spark to take them to the next level.

This Titans’ roster is talented; if Tannehill gets his shot to start, he could have one of his best seasons. He has a chance to the Titans out of the basement of the AFC South.

In this article:Marcus Mariota, Ryan Tannehill