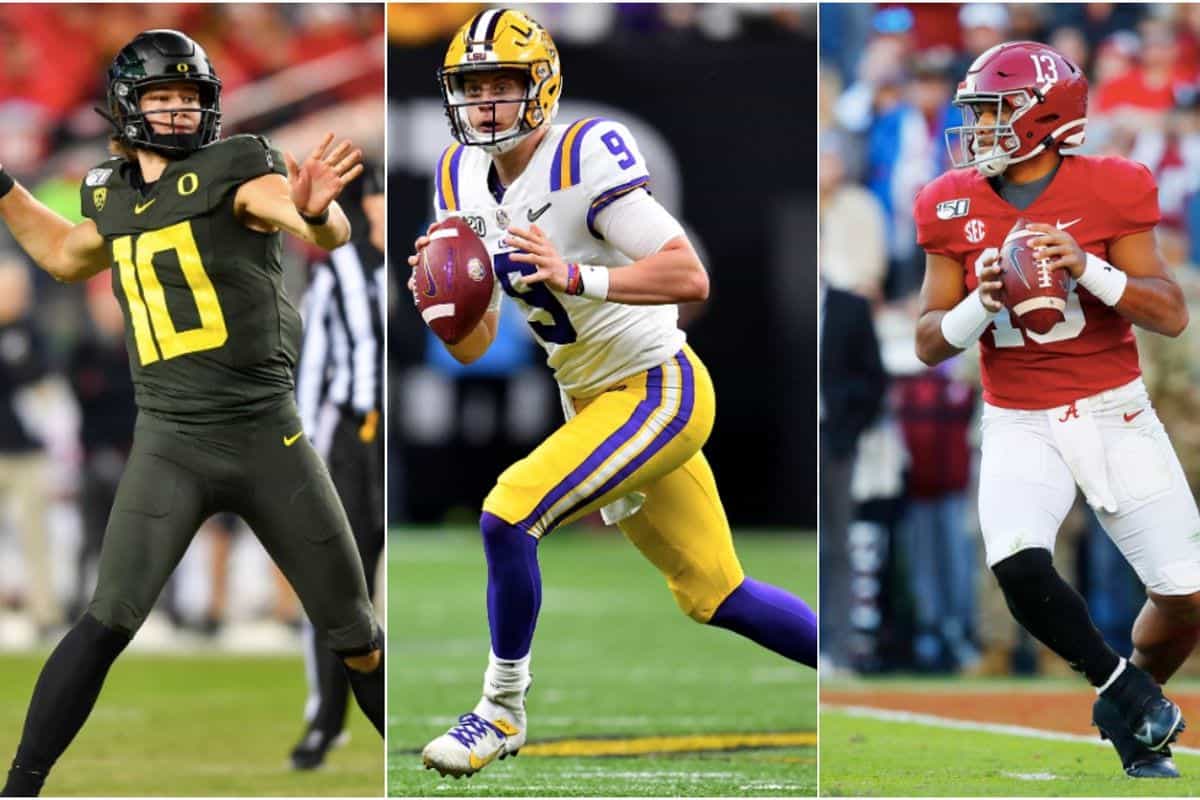 With the 2020 NFL Combine set to invade Indianapolis, Indiana, and your TV screens in a few days, there is no better time than now to get rankings established. By doing this now, you can eliminate the variable of landing spots and just focus solely on film and analytics. We will continue to revisit this up to and beyond the NFL Draft as landing spots will then play a factor in our draft day decisions, but for now, here are my NFL Pre-Combine rookie quarterback rankings for Superflex dynasty leagues.

6’4″ – 216 lbs | After a 2019 season in which he won both the National Championship and the Heisman Trophy, it is hard to imagine a quarterback with more buzz and praise surrounding them than Joe Burrow. While he does not have an entire career of success to lean on, his 2019 statistics were off the charts. Inside the Joe Brady led offense, Burrow had arguably one of the greatest seasons in college history. Throwing for 5,671 yards, he became the first QB to throw for over 5,000 yards and 60 touchdowns in a single season. He did this all while completing 76.3% of his attempts and only throwing six interceptions on the year.

What Burrow makes up for in the lack of elite arm strength, he more than makes up for with unbelievable ball placement. Time after time watching game film, he consistently stands out with his ability to put the ball in the correct spot whether on the outside shoulder on a deep sideline throw or by protecting his receivers on crossing routes, helping to shield them from taking huge shots. Another trait Burrow shows is his innate ability to anticipate when the ball needs to come out. Most of the time, this is even before the receiver is coming out of his break. Add that with his ability to move a defensive back with his eyes, and he has all the makings of a franchise star. Burrow is my number one ranked quarterback in my pre-combine rankings and will go at the 1.01 more times than not.

6’1″ – 218 lbs | The conversation could have been so intriguing as to who would have been the top selection in the NFL Draft as well as for dynasty Superflex leagues if Tua Tagovailoa was healthy. Health concerns are honestly the only knock against him as his play on the field is unquestioned. After coming in as a freshman at halftime for the Crimson Tide during the 2018 National Championship game for then starter Jalen Hurts, Tua threw for 166 yards, three touchdowns, and one interception including the walk-off 41-yard winner in overtime to Devonta Smith. The world knew at that moment there was a star in Tuscaloosa.

He picked up his sophomore season right where he left off completing 69% of his attempts for 3,966 yards, 43 touchdowns, and only six interceptions. The 2019 season will be a season of what if, however. In the middle of the Heisman race and up 35-7 against Mississippi State right before halftime, Tua rolled out to avoid a sack and was brought down awkwardly, dislocating his hip and ending his career at The University of Alabama in one play. Tagovailoa finished his junior year with 2,840 yards, 33 touchdowns, and three interceptions. His total college numbers would end up placing him first all-time in touchdowns and third all-time in yards at Alabama, needing only 32 games to do so.

Tua has all the intangibles and numbers you want to see in a quarterback to lead your team for years to come. Everything from his precision accuracy, decision making, leadership, and his ability to maneuver in the pocket to extend a play are off the charts. It all comes back down to if he can stay healthy. I think he can. While we will not get to see him workout at the NFL Combine this week, the things we need to listen to are how teams view his health and current injury recovery.

Take the hip concern out, and he is the number one pick in the draft as well as fantasy leagues. Both him and Burrow will go 1-2 in Superflex drafts, and you can flip the order if you choose and never hear an argument out of me. Tua has played his entire career with one of the best wide receiver groups we have seen in recent memory, and arguably, better than where he will get drafted to. If he can get selected to a team with a few talented receivers and an offensive line that can protect him, he should thrive in today’s NFL. If you are sitting at the 1.02 in a Superflex dynasty rookie draft, you have the easiest choice in the draft. Take whichever quarterback falls to you and enjoy the success for years to come.

6’6″ – 237 lbs | Justin Herbert is the start of the next tier of quarterbacks for the 2020 rookie class. He surprised the majority of people with his decision to come back to school for his senior year in 2019. Most likely, he was advised that he could improve his draft stock by getting another year under his belt. If you look at his stats and measurables, Herbert looks to have all the talent necessary to be an NFL quarterback. He threw for an eye-popping 10,541 yards for his career on 64% of his passes along with 95 touchdowns to 23 interceptions. While this and his size look great on paper, one of the knocks against him is his failure to show up and elevate his play in big games.

Herbert could be argued to have the best arm in the class in terms of accuracy, ball placement, and arm strength as a package. He can both throw on the run or make a back pylon throw from the opposite hash mark. His legs are also a weapon. No, he will not wow you with breakaway speed, but he has enough to be elusive and when outside the pocket, can tuck the ball away and be a threat to pick up the first down or more. He is much closer to a Josh Allen given his frame than a Lamar Jackson.

While not in the top tier in this class, Herbert is locked in as my number three quarterback in my pre-combine rankings. Wherever he lands, he can and will find success. One of the talked about spots is with the Los Angeles Chargers, taking over the reins from Philip Rivers. Once he is on with a team and in camp, they will work on his inconsistencies. The intelligence is there to read a defense. It’s just the little things that knock him down a peg.

6’4″ – 225 lbs | Where the first three slots were easy to fill in for me, once we get to this point, things become a bit more challenging to decide. You can find numerous plays where someone will make a throw that will make your jaw drop and then later in a game make a decision that will leave you shaking your head. Jordan Love from Utah State is no exception. While a lot of people will point to a lackluster 2019 season as a step back in his development, the deck was stacked against him from the start.

His head coach, Matt Wells, left for Texas Tech. He lost his running back, Darwin Thompson to the Kansas City Chiefs. He lost his four top receivers (Ron’Quavion Tarver, Aaren Vaughns, Jordan Nathan, and Jalen Greene). On top of all of this, he lost his tight end, Dax Raymond. It is no wonder that his 2019 season took a step back when put in context.

In his final year in college, Love completed 61.9% of his passes for 3,402 yards (compared to 3,567 in 2018) for 20 touchdowns and 17 interceptions. Whether it was the lack of talent getting open, learning a new system on the fly, or taking too long to make reads, Love saw a drastic change in his touchdown to interception ratio from the previous year. Regression occurred on both stats from his 2018 season of 32 touchdowns to only six interceptions.

When you study his 2018 film, Love shows all of the traits of a quarterback worth a first-round selection. His deep ball, as well as accuracy on those passes, give him the ability to stretch the defense at any point in the game. When comfortable in his system, Love showed the ability to go through his progressions and make the correct read to keep a drive moving. While he didn’t rely on it, he has deceptive rushing ability and mobility to get out of the pocket to keep the chains moving.

Where Love needs to improve is his short to intermediate route timing rather than holding the ball too long, waiting for a big play to develop. His internal clock needs to speed up as defenses are faster and coverages more advanced at the next level. If a team like the Indianapolis Colts invest in him in the first round like mocked by our NFL Draft analyst Neal Driscoll projected, Love’s dynasty stock could push him into the mid-to-upper second round in Superflex dynasty drafts.