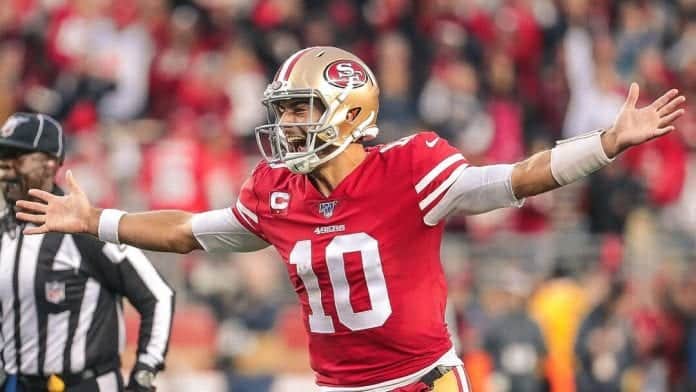 Against the Spread podcast co-hosts Ryan Gosling and Jason Sarney break down Super Bowl Prop Bets and wagers in the coin, Demi Lovato, and Gatorade markets

By Jason Sarney
February 1, 2020
Jason Sarney and Ryan Gosling went all out in their Against The Spread podcast Super Bowl prop bets special! The duo broke down several aspects of wagering on Super Bowl 54 this Sunday in Miami Gardens when the Kansas City Chiefs will face the San Francisco 49ers at Hard Rock Stadium.
Super Bowl prop bets are full of ways to make a profit while enjoying football’s grandest event. When you listen to Gosling break down the historical outcomes of the pre-game coin toss, you know you are in for a show with hoards of betting suggestions and information.
Gosling has even mathematically figured out the Gatorade liquid color frequency of the post-game victory splashes since the tradition began. Also, if you are wondering, Tails historically hits 53% of the time in Super Bowl tosses. So go for broke, says Gosling.
Sarney is staying away from this play, as his heart can’t take heading into the game already down.
Moving on, and still, before the ball is even kicked, Sarney analyzes why pop sensation Demi Lovato could be pacing for an “over” in the national anthem time. Sarney is going against the historical data Gosling pulled up on Lovato’s last five live appearances in which she sang the epic song. As the show will detail, four of her previous five renditions ran under the mark, which is set at 1 minute and 59 seconds.
However, Sarney argues that in the musically and cultural epicenter that is Miami, and i
the presence of Halftime performers Shakira and Jennifer Lopez, Lovato will no doubt need to bring it, and show off the pipes.
Look for an elongated final note, as well as a potential dramatic longer-than-usual pause before the word, brave, and you have the recipe for two minutes. A cool cover that would impress Miami music queen, Gloria Estefan, who also happens to be a small stake-owner in the Miami Dolphins.
We all love a comeback story, and after a tumultuous year, Demi is back! Lovato and the over, all day.
As the duo arguably spent way too much time analyzing Lovato’s prop market and career, another lucrative wager presents itself in the performer’s microphone placement. This one you have to tune in for, but a visual clue has presented itself already about where one co-host’s bet will be with this prop play.
The guys also realized there is a football game to be played, and they have you covered there as well in all marketplaces, including Daily Fantasy with Draft Kings, game props, and player props with FanDuel, as well as the standard game wagering action on the lines and the over-under.
In total, there are close to one hundred plays that were thrown out there for those auditing with pen and paper or busy thumbs recording the guys’ lean. Whether it be your overplays in running back or wide receiver yardage, quarterback touchdown passes on the player props side, or game props like 2-pt conversion attempts, Sarney and Gosling hit their mark in Against The Spread’s 2020 final.
The tables are set, and there are a few days to get your wagers in and do not do so without taking some time to listen to the guys’ breakdown every way to line your pockets with lime-green profit.
Lime-green…think about it. That may be the most aesthetically pleasing in the aqua backdrop of Hard Rock Stadium and those clear waters of South Beach miles away from the game itself.
Listen to the full podcast down below or on your favorite podcast app:
RELATED ARTICLES
NFL