Against The Spread's Jason Sarney lays out his Super Bowl player and game props for Kansas City Chiefs against San Francisco 49ers this Sunday in Miami.

With days away from the “Big Game” this Sunday in Miami, it is time for Super Bowl player and game props! The Kansas City Chiefs and San Francisco 49ers square off in Miami Gardens in a mere few days at Hard Rock Stadium. With an NFL Championship at stake, coaches and players prep for the contest the world will be fixated on, while us degenerates are focused on how this night can become profitable via prop bets.

Betting on the Super Bowl has become a choose-your-own-adventure type of opportunity to finish the evening in the green. Whether it is your standard pick against or with the spread, taking a scoring-based play or lack thereof, or the bare-minimum of being in a Super Bowl box pool.

We aren’t here for boring, we are here for a full game of money-making, and that is where those player props and game props come in handy. The prop bet market has become a low-hanging-fruit type of a betting play if ever there is such a thing.

The Super Bowl offers gamblers and novice players as well the chance to throw minimal action down on obtainable situations, such as “longest reception/rush/pass plays” as well as “anytime scorer plays.” These are two examples of plays that can hit in an instant, as opposed to painstakingly waiting for a result to come to fruition while “looking good” in the 3rd quarter.

A quick example was Kansas City’s Sammy Watkins against the Tennessee Titans in the AFC Championship covering his yards and a touchdown prop plays on one long bomb. Talk about a trifecta!

Of course, a Super Bowl like last year ruined any and all scoring bets since there basically was no scoring. Not in Super Bowl 54. We can all hope and assume at least four or five overall scores can occur between both teams. We will identify some of the more lucrative and enticing “anytime scorer plays” in a moment, but we will start with the ATM version of prop plays, and that is instant cash opportunity.

The regular season was very kind in the prop bet market, as there was a yearly record of 62-57 and a winning percentage of 51.2% across all game and player prop bets in 2019. The NFL Playoffs are a bit of a different animal, and the Super Bowl is its own species entirely. With one last chance to lay some dough down, it’s the best time for taking a healthy balance of safe plays as well as economically priced “long shots,” like…

“1 Unit” can start your Super Bowl betting experience with a profit of $200. Sure an initial three and out puts an immediate end to that relatively risky play. Still, it is too good of a profit margin not to take that early on “reach,” which when you think about it, isn’t all that unlikely with the offensive skill on both sidelines.

Of course, the absolute best-case scenario is hitting a few “anytime touchdown scorers” back-to-back on each team’s opening drive. Becoming profitable after the games first six or seven minutes to this extent is as rare as a Super Bowl going into overtime, but there is a chance with this year’s offensive potential that we can see early action with pay-dirt.

Here are some solid odds for touchdown scorers, and the easy plays like Raheem Mostert and Damien Williams do not offer terrific odds, so let’s find some better prices. 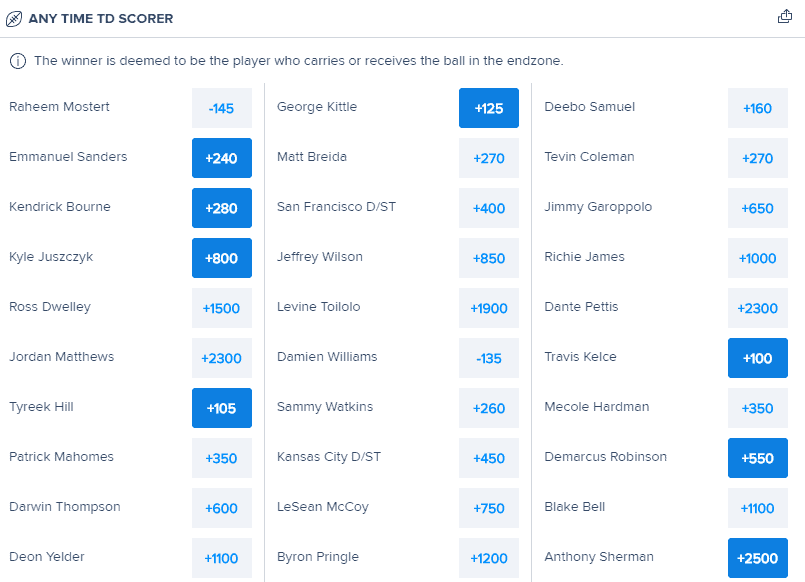 We will begin with the best tight end duo to appear in a Super Bowl since, well, ever. Travis Kelce and George Kittle are in a tier by themselves, and then it is the rest of the position in the league. One of, or both, should be heavily featured here, and I genuinely expect both to attempt to “one-up” each other with scores.

If you all are curious, and I know that you are, here are the odds for the tight ends getting a pair of scores or more, as well as more lucrative odds of each team’s feature runner getting into the endzone more than once.

I know you are thinking, “why am I placing money on Anthony Sherman and/or Kyle Juszczyk to score?” Here is my reasoning on why one, just may.

Fantasy footballers have all been there. 1st and goal at the goal-line, and you are already counting that running back score in your mind until the “vulture” shows up. That could be a fullback, a backup runner, or as we saw in the AFC championship game, an offensive lineman reception scorer.

My point is that when you have two teams who have viable short-yardage weapons, each defense will be keying on them, so look out for the ones many may forget. The Niners will focus on Kelce and Williams in the endzone as well as Tyreek Hill, and a play-action or well-designed play to a wide-open Anthony Sherman may destroy daily fantasy players looking to get one last profitable game of DFS glory.

On the flip side, Kansas City has the difficult task of stopping the Kyle Shanahan-designed running attack, which could leave for an unchecked Juszczyk out of the backfield giving quarterback Jimmy Garoppolo an easy passing touchdown. With Super Bowl props, set yourself up in situations to cheer when many may throw a remote after an oddball score.

If you want to get absolutely nuts, and wonder what those fullbacks payout should one score that coveted “1st game touchdown,” Juszczyk pays out at +4700 and Sherman +10000. Respectively, a $10 buck Hail-Mary on them would pay $470 or $1000 if one breaks the plane, hence breaking the ice on the games six-pointers.

In all honesty, however, the “first TD scorer” is a rough bet, as in the non-winning ticket is ripped up in potential minutes, so there aren’t a ton of chips thrown on this play for me, but find it a duty to present some dream weaving.

And yes, I put $10 on both and some more to follow shortly.

Now we are moving into more realistic waters, and while these are a bit more reachable, the payouts, of course, are not as lucrative. Yet, savvy placements can add up quickly and absorb those losses. Here are some smart-money plays that could, and should happen this Sunday.

Tyreek Hill with MOST RECEIVING YARDS IN GAME: 1 Unit at+290

With a slew of player and game props to pull for throughout four quarters of the Super Bowl, there are always game props to sweeten the potential haul a bit.

There are situations that, albeit not common from game-to-game, do often happen, like successful two-point conversions. Put a unit on this situation coming to fruition. With teams pretty evenly matched, it is an excellent bet to say that the chess match of the game will lead to a specialty decision. Both Shanahan and Kansas City head coach, Andy Reid, are masters of preparation, so seeing these attempts, can very well lead to conversions. A wager on a successful two-point conversion pays +240, so you may as well throw double on the attempt, which pays half of that at +120. 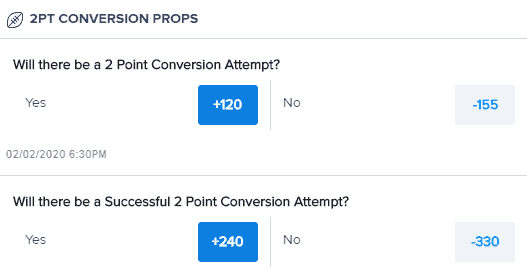 Looking across other plays with solid payouts, we can look at a team like the Chiefs who can be in a situation to spread the wealth in the passing game. If Mahomes hits over 7.5 different pass targets, those odds pay +135.

The smart money plays, in this case, are the tight ends again with Kittle at +900 or Kelce at +750. Otherwise, options are, of course, running backs on each side, Mostert paying at +650 or Williams paying out at +600. The Semi-Risky/Huge reward 1st TD scorer plays are Kendrick Bourne at +1700 or Demarcus Robinson +3100.

PLAY OF THE WEEKEND

It’s go-for-broke time! Here are my three favorite plays to mix into a “same-game-parlay.”

The combined odds payout is +310, and I will happily throw a few units on that triple-play-parlay.

Spread those chips wisely and enjoy the game. Until next time, all!