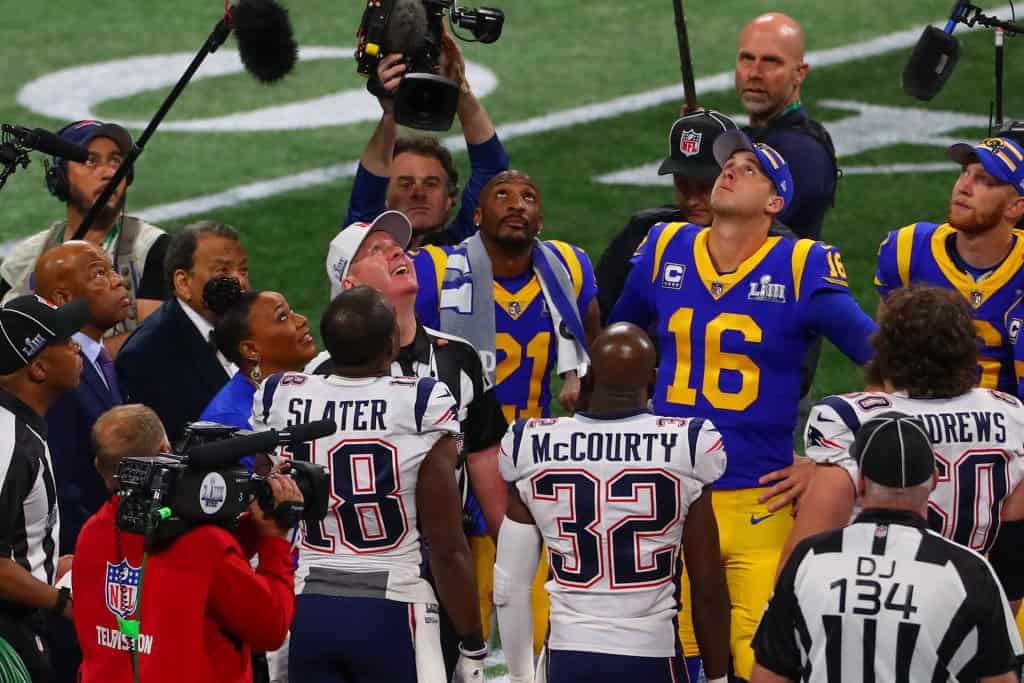 Between the national anthem, coin toss, player props, and various other prop bets, the Super Bowl has it all. The big game is finally here, and with it comes a plethora of NFL betting options to appease your degenerate nature. I’ll give my thoughts on the national anthem, coin toss, and all other prop bets for the Super Bowl below!

The player prop market for the Super Bowl will be slightly sharper due to the amount of betting volume for the game. That said, there are some spots we can attack.

The Buccaneers’ passing game hinges on the availability of Antonio Brown. In games Brown has played, Mike Evans has a 21% target share, Chris Godwin sits at 18%, compared to 20% for Brown. Before the acquisition of Brown, Godwin led the way with a 21% target share while Evans dropped to 15%.

A 15-target game from Brown in Week 17, where Tom Brady helped him get a contract bonus, skews those numbers. A recent uptick in usage has seen Godwin with the highest projected yardage among the Buccaneers’ wide receivers. If Brown plays, I have a lean towards the under there. If Brown sits, I think the number is reasonably priced, so I’d recommend staying away.

An under for Rob Gronkowski

I like an under in this group as well, and it’s Rob Gronkowski. His total receptions prop was 2.5 last week, with an attractive (+120) price on the under. Tampa Bay has seemingly used Gronkowski as more of a blocker for several weeks, while Cameron Brate has handled the receiving role out of the tight end position.

Gronkowski has three or more receptions just once since Week 14, averaging 3.1 targets in that span. We don’t get the “plus” money this week, but I like under 2.5 receptions at any reasonable (preferably -115 or below) odds.

I’m going to the Kansas City Chiefs’ side of the ball for rushing props, and it’s an under on Clyde Edwards-Helaire I’m targeting. Edwards-Helaire and Darrel Williams split the snaps last week against the Buffalo Bills. However, Williams handled the final 11 running back touches for the Chiefs in the second half.

The offense looks better with Williams starting over Edwards-Helaire. As a result, I expect Williams to command the majority of touches out of the Kansas City backfield.

At 30.5 rushing yards, Edwards-Helaire needs only seven or eight carries to have a chance at the over. However, Tampa Bay’s run defense ranks first in yards per carry allowed (3.6) and ninth in Sharp Football Stats rushing success rate. Given the tough matchup and the potential for a reduced role, I’m leaning towards the under on Edwards-Helaire’s rushing prop.

Super Bowl MVP and other bets

I teased that I like Evans to lead the game in receiving yards above. If you’re not sold on Evans like I am, I think Godwin at 5/1 is fine as well. What I want to touch on is the MVP award. More often than not, it’s a QB’s award.

To my surprise, though, two linebackers have won the award in the past ten seasons. However, both were a part of dominant defenses that routed their respective opponents. That is highly unlikely to be the case here.

Is there a valuable MVP bet to make?

The time to bet on these quarterbacks to win the Super Bowl MVP was last week when Patrick Mahomes was 3/1, and Tom Brady was 6/1. Now, Mahomes is a (-115) favorite while Brady sits at 2/1. I don’t want to lay that price with Mahomes while I’d rather bet on a Tampa Bay win at lower odds regarding Brady.

I think a Super Bowl MVP bet on a pass catcher is viable. However, I’d rather bet the over on their player props and their anytime touchdown props. They could have a monster game and still lose the award to their QB. It isn’t as nice of a payout, but there’s security in getting paid if they have a big game, regardless of who wins the Super Bowl MVP.

I’ll never understand why, but the coin toss remains the most popular Super Bowl bet. I’m here to tell you not to bet on it.

You often hear how you are a profitable bettor if you can hit more than 52% of your wagers. That only applies if you take odds no higher than (-110).

Your record doesn’t matter. It’s what odds you get on each bet. You can hit 60% of your plays, but if you lay 70% implied probability (-234) on each bet, you’re a losing bettor.

Betting on the coin toss at anything higher than +100 is a losing bet. You’re paying a tax on something that is genuinely 50/50 odds. If you want to bet on the coin toss, do it with a friend or family member you are watching the game with. If you’re watching the game alone, find someone on social media to bet on it. Do not lay any price other than (+100) if you choose to wager on the Super Bowl coin toss.

The national anthem will be a duet featuring Jazmine Sullivan and Eric Church with a prop bet line set at 120 seconds. There was only one other duet in national anthem’s history at the Super Bowl, which occurred in 2006 with Aretha Franklin and Aaron Neville. That performance yielded a length of over 120 seconds.

My logic says to bet the over because two people singing should take longer than one person. You can also get below 50% implied probability when betting the over.

Since we don’t know how this duet will perform, I’ll take the longer odds. Several other national anthem prop bets exist at various online sportsbooks, none of which yield many attractive options.

Due to the recent push for social justice in today’s society, you can take a stab at “will a player raise their fist during the anthem” at around 9/1. However, as I said, that probably yields no value as I have no idea if any player has that intention. For context, no one kneeled during last year’s anthem.

There are several other quirky options to bet on during the Super Bowl. I doubt you find any analysis that guides you to a profitable long-term bet. My advice is to take the long odds in any prop you chase.

For example, unless you know the ball boy for each sideline and know what color Gatorade is in the cooler, you have no idea what color will be poured on the winning coach. I get it’s fun for some people, but there’s no way to know what the most likely outcome will be. That’s why I stand by my advice in just taking the longer odds unless you have insider information.

I hope you enjoy the big game. If you like the quirky Super Bowl specific prop bets, don’t let my “Scrooge”-like attitude stop you from betting them — as long as it isn’t the coin toss. Good luck this Sunday!