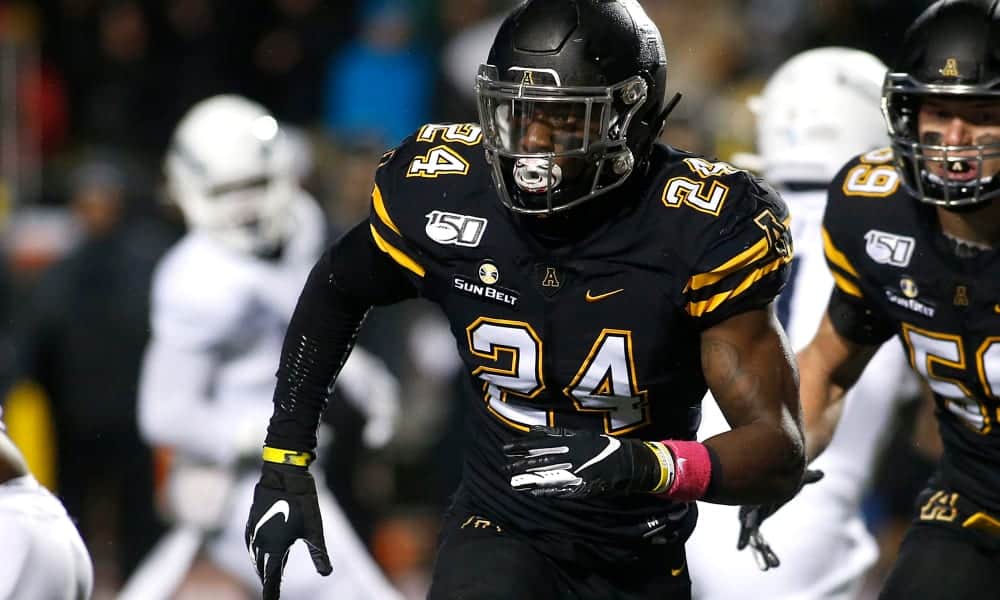 Positives: Highly regarded field-goal kicker with a next-level leg. Very accurate, gets tremendous lift on field goals and consistently kicks them between the pipes. Outstanding kickoff man who gets tremendous hang time on the ball and shows the ability to place kickoffs when necessary.

Negatives: Not a good bad-weather kicker. Small and may struggle when required to make the tackle.

Analysis: Bass was a consistent kicker for Georgia Southern and has the physical skills to make an NFL roster. He’s not a sure thing, but he could at the very least be kept on a depth chart based on his ability to kick off and accurately hit on field goals.

Positives: Aggressive cornerback who’s also a solid special-teams player. Physical, mixes it up with receivers and gets his head back around to locate the pass in the air. Displays a burst to the ball out of his plant, positions himself to defend throws and gives a lot of effort. Keeps the action in front of him and fires up the field to defend the run.

Negatives: Hesitant to react to receivers’ moves off the line and loses a half-step in transition. Not a secure tackler.

Analysis: Brinson played second fiddle in the Georgia Southern secondary, but he has the physical ability and the ball skills to line up in dime packages at the next level. His lack of speed is a concern, but Brinson can be a ninth defensive back and special-teams player in the proper system.

Positives: Underrated cornerback with next-level size and ball skills. Mixes it up with opponents throughout the route, breaks down well and displays a burst to the ball out of his plant. Works to get off blocks and make plays up the field against ball carriers. Shows good recognition, competes hard and remains disciplined with assignments.

Negatives: Possesses poor size and speed. Doesn’t get his head back around to locate the pass in the air consistently.

Analysis: Liptrot was the fourth defensive back in a Georgia Southern secondary that was loaded with talent. He’ll fall through the cracks during the draft and will end up as a free-agent signing, but Liptrot can be a ninth defensive back and special-teams player in the proper system.

Positives: Talented cover corner who shows flashes of brilliance. Quick-footed, smooth and fluidly flips his hips. Diagnoses plays well. Mixes it up with opponents, works to get his head back around to locate the pass in the air and displays a quick move to the throw. Very effective facing the action when he can read the quarterback, correctly times his pass defenses and displays good hands for the interception.

Negatives: Must be more consistent in his backpedal. Gets too grabby with opponents at times. Must become more of a secure tackler.

Analysis: Entering the season graded as a late-round pick, Vildor played well as a senior, performed well at the Senior Bowl and worked out well during the combine. He possesses the tools to be a nickel back at the next level, and it would not surprise me if Vildor eventually developed into a starter with proper coaching.

Positives: Strong-armed quarterback with NFL physical skills. Effectively commands the offense, buys time in the pocket and goes to checkdown receivers. Spreads the ball around, easily gets rid of the ball with a flick of his wrist and drives deep passes with speed. Sits in the pocket and takes a big hit in order to get the throw away.

Negatives: Must improve his overall accuracy and pass placement. Shows indecision on occasion. Occasionally throws the ball off his back foot, which results in inaccurate passes.

Analysis: Evans has next-level size and an NFL arm, but he really must improve his pass placement and accuracy. He’s a solid athlete with upside who should get consideration for a practice squad this fall.