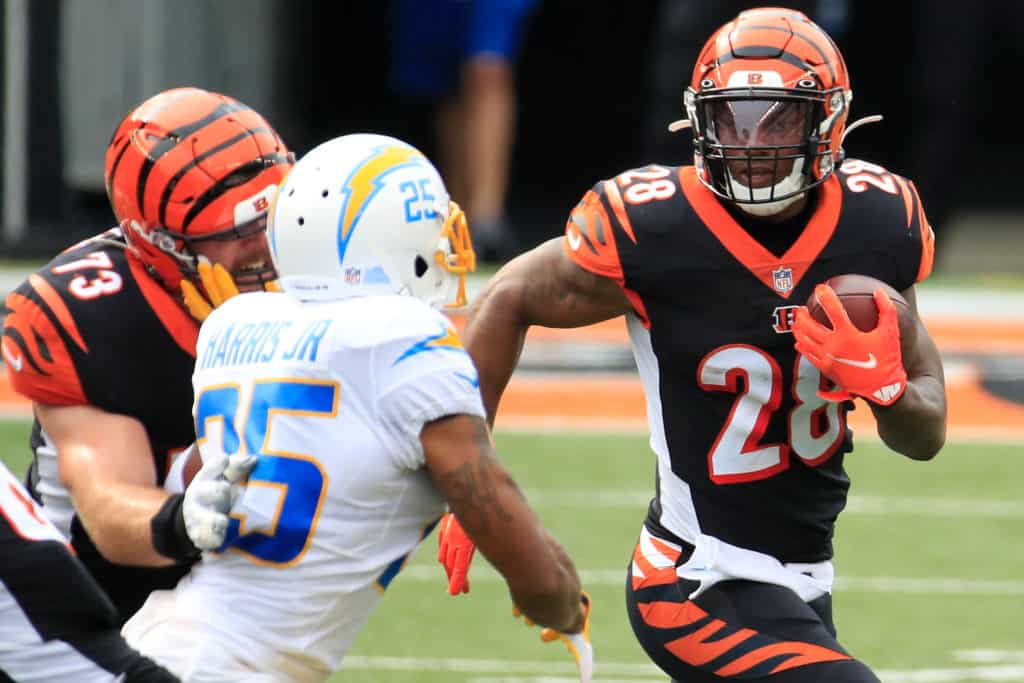 CINCINNATI, OHIO - SEPTEMBER 13: Running back Joe Mixon #28 of the Cincinnati Bengals rushes in front of cornerback Chris Harris #25 of the Los Angeles Chargers during the first half at Paul Brown Stadium on September 13, 2020 in Cincinnati, Ohio. (Photo by Andy Lyons/Getty Images)
What's in this article? Click to show
Tale of two halves in 2019
Joe Mixon and his fantasy football expectations for 2020
Mixon’s Week 1 performance
Mixon’s fantasy value Week 2 and beyond?

The Cincinnati Bengals as a whole came into 2020 with ample optimism. They draft their franchise quarterback in Joe Burrow plus their 2019 first-round pick (Jonah Williams) debuts. But in Week 1, it was an uneasy performance for Burrow and the Bengals, especially in fantasy football. That goes double for Joe Mixon and we will take a look to see if this is a real concern or just a one-off fantasy dud.

The Bengals as a whole had a terrible 2019 season, going 2-14 and landing the first overall pick in the draft, leading to their selection of Burrow. Mixon had an inconsistent 2019 after a breakout season in 2018, but performed much better the second half of the season. Over the first eight games of the season, Mixon only hit 75+ scrimmage yards three times. In the final eight games though, he hit that mark seven times and the only time he finished with less than that was a week where he had 73 yards. He also had only three touchdowns in the first half versus five in the second half.

According to PFN’s Consistency Score metric, it shows an even bigger difference in the two halves. Over the first eight games of the season, Mixon’s consistency score was 2.79, which was ranked 40th amongst all running backs over that time. In the final eight games of the season, Mixon had a consistency score of 6.51, which was fifth amongst all running backs during that time. So not only did he perform much better statistically but he was much more consistent week-in and week-out.

Joe Mixon and his fantasy football expectations for 2020

Coming into the 2020 season, there was concern about a potential holdout due to a contract situation. Yet, shortly before the regular season started, Mixon signed a four-year extension with the Bengals. Armed with a new contract, new quarterback, and an improved offensive line, Mixon had a lot of momentum for this season. According to FleaFlicker’s ADP for half point-per-reception (PPR), Mixon was being drafted as the seventh running back off the board and the ninth player overall in fantasy football.

With Burrow under center, he represented a much-needed improvement over Andy Dalton and Ryan Finley from 2019. Plus, he had just come off a historic season where he threw for over 5,600 yards and 60 touchdowns. The ripple effects of Burrow extend to others, helping running back Clyde Edwards-Helaire to 1,700+ yards from scrimmages and 17 touchdowns in 2019 as well.

With Williams making his debut amongst their offensive line, Mixon knew it was the organization’s goal to improve a below-average offensive line. So Mixon, who had two straight seasons of 1,400+ yards from scrimmage and at least eight total touchdowns, had all the makings of a running back ready to take the next step forward in fantasy football when you consider the supporting cast and areas of upgrade.

In what was expected to be a high scoring affair against two teams ravaged by injuries on their respective defenses, the Los Angeles Chargers walked away with the victory by the score of 16-13. Mixon’s usage proved that he is undoubtedly the top running back for this Bengals squad. He had 19 of the 20 carries given to running backs (Giovani Bernard had one), but did see only two targets compared to Bernard’s five. Mixon would finish with 69 yards (3.6 yards per attempt) while the second-leading rusher would be Burrow, who finished with a bit more success. Burrow would rush the ball eight times for 46 yards (5.8 yards per attempt) and a touchdown.

Burrow’s ability to run the ball may actually work in Mixon’s favor as it could open up more running lanes. But the fact that Burrow was able to get it going while running the ball is encouraging for the team’s overall outlook in the rushing game. Combine that with the fact that Mixon saw 95% of the carries amongst running backs, the season outlook for the Bengals is still strong considering there was no preseason and it was the first live game action Burrow has ever seen at the NFL level.

Looking at Mixon’s performance, it certainly wasn’t an ideal start to the season. If you take away Mixon’s longest run of 14 yards, Mixon’s yards per attempt drops from 3.60 to 3.05 (18 carries, 55 yards). In looking at Mixon’s consistency score, he did see a decrease from 4.83 from all of last season to 4.68. But his usage as a whole is encouraging as he was tied for sixth in the league with his 19 carries.

With Bernard as the primary third-down/receiving back for the Bengals, it would not be surprising to see that be the case going forward. Mixon only saw more than five targets in a game twice last season and had six games in 2019 where he had two or fewer targets. With receiving weapons like A.J. Green, Tyler Boyd, John Ross, and Tee Higgins, it’s going to be hard for Mixon to see many pass targets.

Mixon’s fantasy value Week 2 and beyond?

Mixon comes into Week 2 with a big bounce-back spot. He and the Bengals face a Cleveland Browns squad on Thursday night that was just victimized by the high-powered Baltimore Ravens offense. The Ravens would put up 38 points which included over 100 yards rushing and two touchdowns, which both came from rookie running back J.K. Dobbins. With two teams that struggle on defense and plenty of playmakers to go round on offense, it’s a game where we could see fireworks on offense and help provide fantasy football owners with plenty of points to go around.

Mixon will continue to see the overwhelming amount of carries come his way, including work in the red zone. On top of that, he should be expected to see more than two targets as well. The Bengals made sure to keep Mixon in the game plan with the amount of work he saw, and that won’t be changing anytime soon. He is the biggest playmaker and they’ll make sure to keep him heavily involved in their offense.

Beyond Week 2, the Bengals have a fairly appetizing schedule coming up, starting with the Philadelphia Eagles, who have been decimated by injury and gave up multiple rushing touchdowns in Week 1. Week 4, the Bengals will go up against the Jaguars, who were gashed by the running back duo of Jonathan Taylor and Nyheim Hines in Week 1. They also field one of the worst defenses in all of football.

All in all, Joe Mixon’s usage continues to make him a mid-tier RB1 in fantasy football at worst, and will look to Week 2 in having better luck gaining more yards and having more opportunities in the red zone. This is no time to panic and you should continue to trust him going forward. If anyone is out there looking to buy-low, Mixon may be a guy to pursue. He’ll right the ship soon enough and it may come as early as this Thursday.