Dan Arnold. Derek Carrier. Matt Gono.  Michael Joseph. Jake Kumerow. Ali Marpet. Nicholas Morrow. Nate Trewyn. Jeremy Vujnovich. Brandon Zylstra. What do those names all have in common? Those ten players are the only Division III football programs to make it onto an NFL roster this year. Next season, that number will increase to eleven because of one offensive lineman from St. John’s University: Ben Bartch, who recently accepted his invite to play in the Senior Bowl. He’s going to shine at the Senior Bowl in Mobile and work his way onto an NFL roster.

The rise of D3 players is tricky, but Bartch has several things going his way. First, offensive linemen are at an absolute premium in today’s game, and offensive tackles even more so. Four of those ten Division III players listed above are offensive linemen. Teams are more than willing to try almost anybody at the spot. Second, his potential rise isn’t unprecedented either. Ali Marpet played for Hobart in college, but his tape had him on NFL radars. He worked himself up into playing in the Senior Bowl, where he dominated in practice. He performed well at the Combine and the kid from Hobart became a second-round pick of the Tampa Bay Buccaneers, and he’s become one of the best offensive linemen in the NFL today. The other case is in the 2013 NFL Draft with offensive tackle Terron Armstead.

Armstead played for Arkansas-Pine Bluff in college, which is an FCS-level team. However, the Golden Lions enjoyed a 10-2 record his senior season, drawing some NFL attention. This led to Armstead’s invitation to the offseason circuit, which is where he made his money. Armstead enjoyed a great showing at the East-West Shrine Game, but the Combine really sold his stock. Armstead was a former track star, and he blew the Combine open by running a 4.71 40 and showing off during the jumps. This led to him being a 3rd-round pick and he’s now arguably the best left tackle in the NFL today.

Ben Bartch can enjoy a similar rise this offseason with a great performance at the Senior Bowl. His tape has been an enjoyable watch, as you can clearly tell he’s just a better athlete than the rest of his competition. Bartch is a former tight end who bulked up to move over to offensive tackle. That athleticism has still stayed with him, as Bartch is explosive out of his stance and he’s nimble. We’ve seen several tight ends convert over to tackle with players like Joe Staley and Jason Peters.

Bartch lines up mainly in a two-point stance, which has become more and more of the norm with the rise of the spread offensive style, but still important to note.

Bartch (LT #78) fires out of his stance and you can see his hands pop into place on the defender. If you pause at about the 19-second mark, you see the hand placement is almost textbook, with his left hand (outside hand) right on the inside shoulder of the defensive end. While I’m a little different in that I prefer the outside hand on the opponent’s bicep, that move is one that the elite at the NFL do, so expecting Bartch to do so is unfair.  His hips stay square to the rusher, and he locks on and moves his target. This was the very first rep in his tape that I saw, so I had to dig into the rest.

This was a few plays after the play mentioned above. Bartch is still at left tackle, once more in pass protection. Watch how he keys with the defensive end. The end hesi-steps towards the inside and then explodes to the outside, but Bartch remains unfazed. He keeps his hips balanced and fires his hands and throws the defensive end. The end is quick to recover, but his rep is dismantled and the QB gets the ball out for a score.

That rep is important because a lot of collegiate offensive linemen struggle with handling speed rushes to the outside, mainly due to poor balance issues. Bartch demonstrates great flexibility and balance, and his footwork is pretty nimble for a big man. He’s not lining up against Myles Garrett, but the traits being there are still noteworthy.

Here he is again in pass protection. Check out the power on this rep. His initial punch is swiped but he quickly recovers and his second punch pops the defensive end back and lets Bartch re-establish himself. Bartch then re-directs the rusher away from his quarterback and lets the quarterback scramble out. Check out the finish by Bartch at the end, throwing the rusher into the dirt.

When you see offensive linemen do what I call “finish”, it’s like the Mortal Kombat term. I want to see them put their opponent in the dirt on rep and establish themselves. You have to be mean, physical, and gritty to be an NFL offensive linemen, and that means finishing well. Quenton Nelson left a body count like Stalingrad when he was at Notre Dame with the number of opponents he had eating turf. It shows off a lot of traits when you do so. If Ben Bartch shows off the finishing moves at the Senior Bowl, he’ll quickly be a favorite in the 1vs1 drills.

Safe to say…Bartch can finish and finish well.

This is my favorite play of Bartch’s tape. Poor #14 blitzed into the wrong gap on this one. Bartch fires off and carries him well out of the play and then throws him down to the dirt. Watch the extra sauce at the end of this rep too. I laughed and right then I decided to write this article.

Bartch checks off a lot of boxes with his tape. He’s a phenomenal athlete with great lower-body mechanics. He’s smart and  clean in pass protection. He moves guys in the run game with great power and positioning. Most importantly, he finishes and he finishes with a soul-tearing mentality.

He isn’t the perfect prospect. I said relatively clean in pass protection for a reason. I noticed his hands can spray and get high on some reps. It’s not on every single one, but it’s enough to note. I also want to see some anchor with him, as he is rarely bull-rushed off the edge.

There will be questions about his level of competition. How well can he adjust from D3 athletes to NFL-caliber athletes? These are certainly valid points, but the good thing is that he is clearly dominant over them. Ben Bartch will answer a lot of questions when he shows up for the Senior Bowl. If he performs well there and then tests like he plays, Ben Bartch can become a legitimate Day-2 draft prospect. In my most recent mock draft, I put him with the Rams in the third round of the draft, but there’s a shot he could go much higher than that. 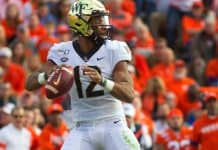