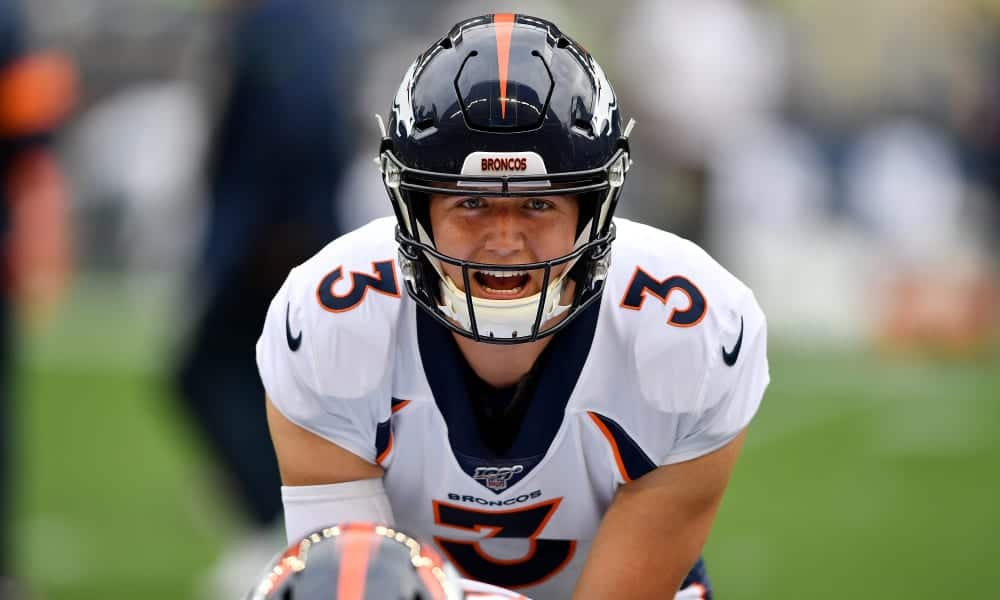 SEATTLE, WASHINGTON - AUGUST 08: Drew Lock #3 of the Denver Broncos warms up before the preseason game against the Seattle Seahawks at CenturyLink Field on August 08, 2019 in Seattle, Washington. (Photo by Alika Jenner/Getty Images)

After the first season, fans and media are destined to dub the rising rookies future stars of the league. Granted, while their transition from college to the pros is impressive, it could be a fluke of what is to come. In reality, it’s the names that shine in Year 2 that should grab the attention of the organization — no matter how their rookie campaign went.

The sophomore stars that trend in the right direction prove they’re the ones that become the face of the NFL. Look at Lamar Jackson and Patrick Mahomes — both exploded with their offense and picked up MVP titles on the way to record-setting numbers. Other standouts, such as Minkah Fitzpatrick, Nick Chubb, and Courtland Sutton, showed that while their rookie seasons were a starting point, they weren’t done evolving their skills.

By the end of 2020, coaches and general managers likely have a better idea of what the future holds at a specific position. And some rookies, despite balancing the line of young prospect or quality starter, will need another season to show what they can do when given the opportunity.

Whatever the reason for a first-year success or flop, the following year tells the tale of what’s to come. Every team has a star in the making.

The Cardinals knew that Byron Murphy was going to be a project when selecting him out of Washington. Last season, the former Husky allowed nearly 70% of his passes in coverage while recording 78 total tackles and a lone interception.

Still, the 5-foot-11 cornerback could be ready to part the “Red Sea” in the desert with a move inside to the slot. With Patrick Peterson and a rejuvenated Robert Alford on the outside, a move to his natural position likely will help him prosper in Year 2.

“I feel like inside is kind of a better fit for me,” Murphy said, according to the team site. “I like it because I’ve got to be more physical, which is something I love doing. Guarding those slots, it’s a lot of speed guys, a lot of guys I like to guard.”

Murphy’s style of play will allow him to thrive against slot receivers and tight ends. He is known for his natural speed and ability to cover in man; the second-year corner should help with creating havoc for quarterbacks across the middle of the field. The move and 16 games under his belt likely will benefit Murphy as he transcends into a quality defender in coverage.

Slot corner is no longer just a third player — they’re starters. Should he improve against the run, Murphy is the apparent breakout star at the position.

Why was Jonah Williams not a star last season? Simple, he didn’t play. After being selected 11th overall as the future blindside protector, the Alabama prospect suffered a season-ending shoulder injury and required surgery to repair a torn labrum.

Outside of concerns that the injury will linger, this could be the top pass protector fans have been wanting in the past three drafts. With Joe Burrow now taking over as the face of the franchise, the Bengals are set with someone to help protect him long-term.

“He’s ready to help us at left tackle, and we’re excited about the prospect of getting Jonah – not the prospect — we’re glad to get Jonah back on the field and get him ready to go, whenever that time comes,” Bengals coach Zac Taylor said last month. “But he’s healthy; he’s ready to go. I know he’s excited.”

BIG reason Jonah Williams is going to be the 1st tackle taken. Body control & RECOVERY. Not many guys can get out of this bind vs an elite defender. These two had a heck of a battle Monday night. This is insane to be able to sit back down on this. pic.twitter.com/LJTpG8wAYM

Coming out of the Nick Saban dynasty, there isn’t a Crimson Tide tackle with more praise from the program. A unanimous first-team All-American and playing both left and right tackle, Williams didn’t allow a sack in 920 snaps during 2018. For his career, the California native allowed three total sacks from both sides of the line. If Williams’ character doesn’t sell you on him being a cornerstone, his production in college certainly should.

Even if you threw out the stats from his first season, how do you not expect Drew Lock to only improve with the retooled offense put together this offseason? When looking back in 2019, the Missouri standout lived up to expectations as a second-round pick, commanding his team to a 4-1 finish and closing out the year with a 7:3 touchdown-interception ratio.

Denver is now looking to take over as the sole threat to Kansas City in the AFC West. John Elway wasted little time finding his hopeful heir to Peyton Manning options to succeed both in the trenches and in his weapons. Melvin Gordon will provide a 1-2 combination with Phillip Lindsay as an option on the swing route, while Graham Glasgow is an upgrade opposite Dalton Risner. In the draft, Jerry Jeudy is a reliable top option for the future, while K.J. Hamler should provide speed in the slot as the team’s fourth target.

Earlier this week, I stated that Lock was a dark horse to hoist the MVP title in year two. While that might be far-fetched, so long as he continues to develop under center, the Broncos have their man. And with the newest additions, it’ll be hard for the former Tiger not to pounce on the chance to break through to start the decade.

Tampa Bay’s most significant weakness for the past five seasons has been in the secondary— primarily at corner. That should change with the likes of Carlton Davis and rookie sensation Sean Murphy-Bunting patrolling the targets. The Bucs used two draft picks on corners last season, leading to believe that perhaps this season, Jamel Dean is the next player to shine on the last line of defense.

First career INT for Jamel Dean. Nice bounce back for the rookie (3 PBU) after he called last week’s disaster his “welcome to the NFL” game #Bucs pic.twitter.com/lDNGpRZEof

The former Auburn corner played well in his five starts last season, tallying a rookie-high 17 pass breakups to go along with a pair of interceptions. He also excelled in coverage despite being a rotational player that was growing into a star. With a year under his belt, Dean’s move to the outside could create an SEC barrier that gives offensive coordinators fits in man coverage.

“He made some good plays; he made some bad plays,” Buccaneers coach Bruce Arians said of Dean last season. “It was a big learning experience.”

Davis led the NFL with 19 pass breakups while Dean finished fourth overall. Murphy-Bunting tallied three interceptions along with eight deflections on the outside. With all three over 6-foot, Tampa will have a great problem on their hands, finding ways to fit the trio on the field.

Quietly, Auburn has created quality NFL cornerbacks over the past several seasons. Don’t sleep on Dean, or he’ll break up your thoughts and fill them with highlights of a standout season.