The Seattle Seahawks have been one of the most consistent performers of the past decade, but the question for our 2020 season betting preview is whether that consistency continues. Just once in the last eight seasons have the Seahawks been absent from the playoffs, a trend they are clearly looking to keep alive given their recent activity in the trade market. Let’s dive into the Seahawks moves this past offseason and what it might mean for the team in 2020.

The Seahawks are going to look somewhat different when the 2020 season opens. They made headlines with a blockbuster trade for Jamal Adams to bolster their secondary. However, Adams will join many new additions on both sides of the ball when the Seahawks take to the field.

Bruce Irvin will have the tough job of replacing Jadeveon Clowney on that defensive line, having registered 8.5 sacks with the Carolina Panthers last season. Offensively, they added another former-Panther in Greg Olsen, who they hope can become a reliable weapon for Russell Wilson, assuming he can stay healthy, of course. They also added two new offensive linemen in center B.J. Finney and right tackle Cedric Ogbuehi, in a revamped right side of their offensive line.

The most significant loss is naturally the presence of Clowney. For all the talk of his lack of sacks, Clowney’s impact is as much in his presence as his statistics. Having Clowney on the field draws the attention of the defense and opens up opportunities for the rest of the defense. The Seahawks pass rush was among the worst in the league last season, and now without Clowney, that area could regress even further.

The other loss defensively is Brad McDougald, who went to the Jets as part of the Adams deal. The arrival of Adams is an upgrade overall, so McDougald’s loss should not be that strongly felt.

Offensively the biggest losses are on that right side of the offensive line. Justin Britt, D.J. Fluker, and Germain Ifedi have a combined 12 years of experience as part of this offense. However, this offensive line has been a mediocre unit for multiple years, and therefore, it is no surprise the Seahawks decided to make some changes.

A lot of the defense is going to rest on how Irvin replaces Clowney. Irvin’s numbers alone suggest that he is more than capable of being a replacement for Clowney. However, he will likely not command the same respect that Clowney does. That is going to transfer a lot of pressure to second-year defensive end L.J. Collier as well as defensive tackles Poona Ford and Jarran Reed.

The other big area of emphasis will be the play of the new safety combination of Adams and Marquise Blair. We know what Adams will bring, playmaking ability but a potential to be exposed if he gets isolated in coverage. Blair is somewhat the wild card, having played just 22% of the snaps defensively in his rookie season.

The Seahawks focused their first two picks on their defense. They surprised people with their selection of Jordyn Brooks out of Texas Tech. However, Brooks is likely to be a Week 1 starter for this team, slotting in alongside the impressive duo of Bobby Wagner and K.J. Wright.

They also added some depth at outside linebacker with Darrell Taylor out of Tennessee. Taylor is a high-upside backup whose development in college was stunted by injury. However, he had received praise as a potential first-round pick entering the 2019 season. He can provide splash plays for the Seahawks when spelling Irvin on the field.

The arrival of Olsen should have grabbed the headlines, but when camp opens, it will be the offensive line that all eyes are on. With three brand new starters at center and on the right side of the line, if Wilson and the run game cannot function immediately because the line is not doing its job, then the decision making of the team will come under fire.

The Seahawks used a third-round pick on LSU guard Damien Lewis. Lewis is a talented player and will compete immediately with 2019 fourth-round selection Phil Haynes. Lewis and Haynes will quickly be considered a potential target for opposing defensive lines and will play beside two offensive linemen in Finney and Ogbuehi that have started just six games combined in the past two seasons. 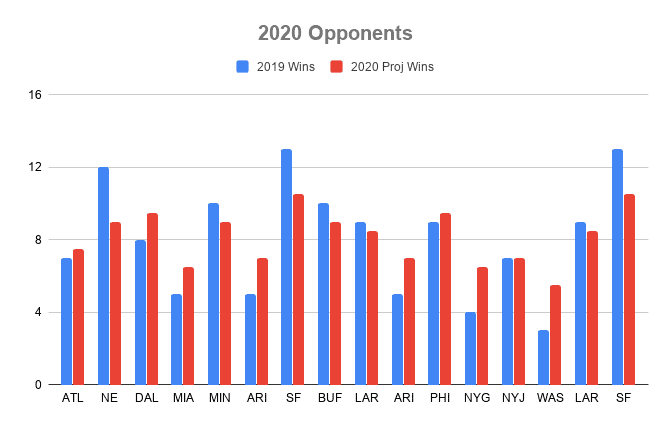 The Seahawks have an interesting schedule in 2020. It starts off with five tough games, including two early kickoffs on the East Coast in Weeks 1 and 4. Sandwiched between those two games, they host two teams projected to finish over .500 in 2020 in the New England Patriots and Dallas Cowboys. That streak of games ended with a tough finish against the Minnesota Vikings, who went as deep as the Seahawks in the playoffs last season.

After their Week 6 bye, they have another string of five tough games, including four divisional games and another early East Coast kick off in Buffalo sandwiched between those four divisional games. After a trip to Philadelphia in Week 12, they then get a reasonably easy run against the New York Giants, New York Jets, and Washington Football Team. Their season ends with divisional tilts against the Los Angeles Rams and San Francisco 49ers.

In terms of how the schedule ranks based on 2020 win projections, it sits in the middle of the pack, but the sequencing of the schedule is extremely tough. The Seahawks are a successful team when it comes to early kickoffs on the East Coast, but three of them on the schedule for the second year running is something that will be hard work. This schedule could easily end up being one of the most taxing of any team in the NFL, especially if they stumble out of the gate before their bye.

A projected win total of 9 seems extremely low for the Seattle Seahawks, given that they have not won less than nine games since 2011. During that time they have won double-digit games in seven seasons, winning precisely nine games in the only other season. My colleague Cole Thompson believes that that streak will continue in 2020, as he projects the Seahawks to win 11 games again this season.

The schedule is a concern for the Seahawks, but there is much to be optimistic about. Getting the Patriots in Week 2 is likely a blessing, and their strong record in East Coast early-kickoff games last season (5-0) suggests they should not suffer from a situation that is often seen as a stumbling block for West Coast teams.

This is a division that could see both the Rams and Cardinals improve in 2020, but both have reasons that they could remain with similar win-loss records to 2019. The Seahawks have at their disposal a combination of one of the best quarterbacks, a well-respected head coach, and a defense that can be dangerous in 2020 if all the new parts click.

The Seahawks new offensive line is the biggest concern, but Wilson and that run game usually find a way to get around those issues. As long as Wilson is under center, double-digit wins are something that can be virtually penciled in for the Seahawks on a regular basis.