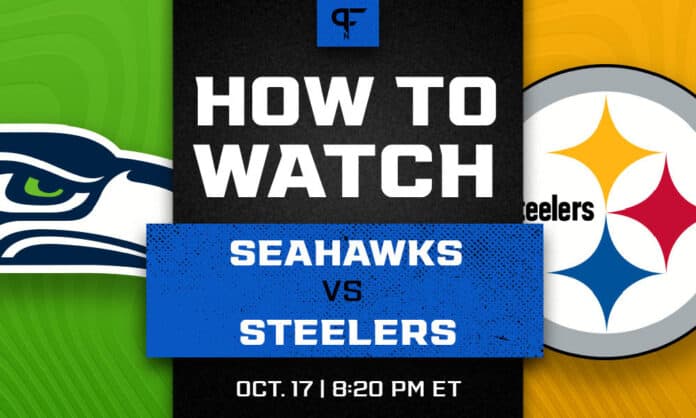 Seahawks vs. Steelers prediction, pick, odds, and how to watch the Sunday night game

What is our prediction for the Steelers vs. Seahawks Sunday Night Football matchup, what are the latest odds, and what channel is the game on?

With questions marks aplenty in this Seattle Seahawks vs. Pittsburgh Steelers Sunday Night Football matchup, making a prediction for how this game will turn out is a tough thing to do. With both sides desperately in need of a victory, let’s take a look at the current NFL odds, what channel to watch the Steelers vs. Seahawks game on, and what station you can listen on.

The Seahawks enter Week 6 of the 2021 NFL season with a proposition they have not faced since 2012 — how to win without Russell Wilson. Having not missed a game in his career since first starting in 2012, Wilson’s absence will allow us to see how prepared the Seahawks really are.

The problem for the Seahawks is that no QB in the NFL has been more valuable to his team than Russell Wilson. Through five weeks, Wilson leads the position in PFN’s Offensive Value Metric. Even with sublime play from Wilson, the Seahawks still only rank in the middle of the pack offensively.

Now, Geno Smith needs to come in and be almost as good as Wilson if the Seahawks are to keep their playoff hopes alive. The problem for Smith is the offense is carrying this team. The Seahawks’ defense ranks last in yards allowed and just outside the bottom 10 in points allowed.

Unless the Seahawks can improve drastically, the prediction for this week’s game against the Steelers unfortunately only shows one realistic option.

Playing at home in prime time against a Wilson-less Seahawks team should see the Steelers as more than 5-point favorites. Unfortunately, the team from Pittsburgh has suffered their own woes in 2021. Those woes mean that, while a prediction for this Steelers vs. Seahawks matchup should be simple, it’s really not.

The problems start at QB, where Ben Roethlisberger has been one of the least valuable QBs to his organization according to OVM. Only nine QBs have posted a worse OVM this season, and two of them are backup QBs.

The concerns around Roethlisberger have hurt the entire offense. The Steelers rank as the sixth-worst offensive unit in terms of points scored and yards gained. Their passing and rushing games rank in the bottom 10 in yards per attempt, and they are averaging just 1.67 points per drive (fifth-worst in the league).

The defense has been slightly above league average but in the bottom half against the pass. When your offense is struggling, you need the defense to be a top-five unit, which is not the case in Steel City.

With both teams teetering on the brink of 2-3, this is a borderline must-win game. While a loss here might not be a hammer blow to their playoff chances, it does significantly hurt any chance they would have of potentially winning the division. Neither of these teams appears good enough right now to be winning multiple road playoff games.

From a prediction standpoint, it’s hard to look beyond the Steelers beating the Seahawks this week. Geno Smith is playing just his seventh game and making his first start since the 2017 season. The Seahawks’ defense is among the worst in the league. Both of those elements combined make it tough for the Seahawks to get a win.

However, with the disaster the Steelers’ offense has been, it is hard to bank on anything. This has all the makings of a low-scoring game that comes right down to the final couple of drives. It is impossible to trust either offense to actually make the plays to win the game on those drives.

How to watch and listen to Seahawks vs. Steelers this week