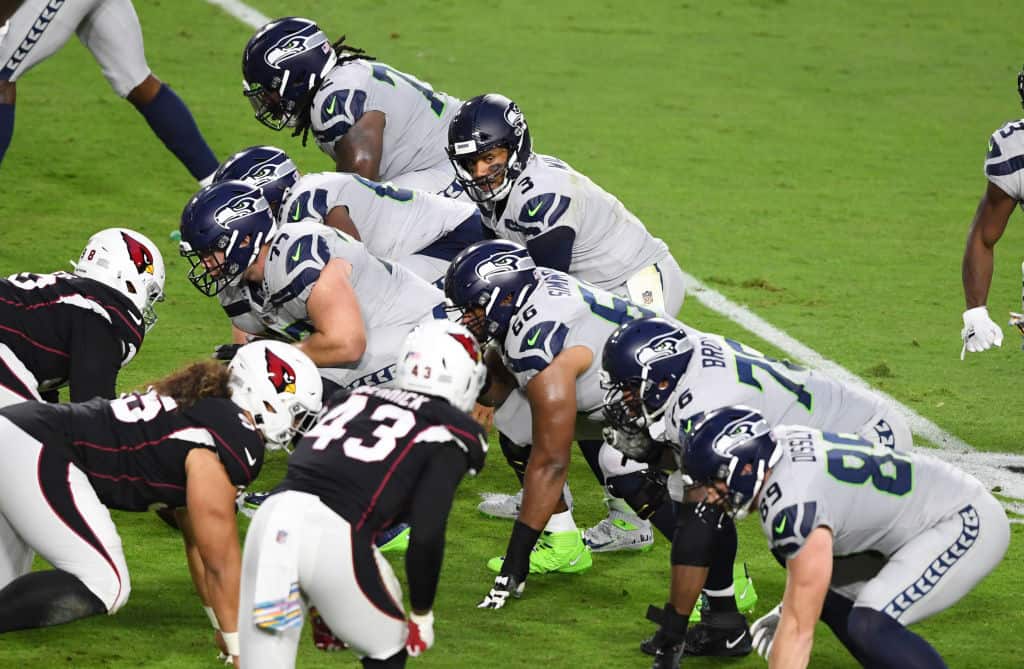 GLENDALE, ARIZONA - OCTOBER 25: Russell Wilson #3 of the Seattle Seahawks gets ready to take the snap from under center against the Arizona Cardinals at State Farm Stadium on October 25, 2020 in Glendale, Arizona. (Photo by Norm Hall/Getty Images)
What's in this article? Click to show
What’s wrong with the Seahawks defense?
News of the Carlos Dunlap trade helps the Seahawks. A little.
Seahawks Trade News and Rumors: Could the Seahawks be in the market for Stephon Gilmore or Xavien Howard?
Sifting through the rummage bin
Help from within the Seahawks roster, including Jamal Adams and Jordyn Brooks

The Seattle Seahawks have the offense of a Super Bowl champion and a defense that makes the Atlanta Falcons defense look dangerous and rugged. The news of defensive end Carlos Dunlap’s arrival via trade with the Cincinnati Bengals provided a modest upgrade, but the Seahawks may need to be even more aggressive to improve a pass defense ranked 30th in the NFL in Football Outsiders DVOA and 31st in sacks per pass attempt.

With all the trade news and rumors swirling, we have to ask: Can the Seahawks swing a trade for a cornerback like the New England Patriots’ Stephon Gilmore or the Miami Dolphins’ Xavien Howard? Might help be available at the Dallas Cowboys or Houston Texans sheriff’s auctions? The Seahawks’ lack of future draft capital will make a blockbuster trade nearly impossible, but the team needs to explore every available option.

What’s wrong with the Seahawks defense?

The Seahawks have recorded just nine sacks through six games, with several of those games against some of the weakest and most mistake-prone offenses (Cowboys, Minnesota Vikings, Atlanta Falcons) in the NFL. Jamal Adams is tied with Benson Mayowa for the team lead with two sacks despite having only played two-and-a-half games this season due to a groin injury. The Seahawks have failed to find an adequate replacement for veteran edge rusher Bruce Irvin, who was lost to a Week 2 ACL injury.

Per Sports Info Solutions, the Seahawks apply pressure on opposing quarterbacks on just 30.9% of snaps, the ninth-lowest rate in the league, putting them in the same range as the defensively-challenged Falcons (30.6%). That lack of pressure allows opponents to pick apart a thin secondary. Per Football Outsiders, the Seahawks have the NFL’s 27th-ranked pass defense over the middle of the field and 25th ranked in stopping deep passes. The absences of Adams and fellow safety Marquise Blair (ACL) have obviously made it harder to defend the middle of the field.

Lack of depth in the secondary is also forcing the Seahawks to play more base defense than they would like, a problem they also coped with last year. The Seahawks have used just four defensive backs against opponents who have three or more receivers on the field for 14 opponent’s pass attempts this season, tied with the Pittsburgh Steelers (whose base defense is full of nasty pass rushers) for the highest total in the NFL. Bobby Wagner and K.J. Wright are excellent coverage linebackers, but rookie Jordyn Brooks is the third starter right now, and opponents will only find more ways to exploit the youngster or the aging vets in coverage.

News of the Carlos Dunlap trade helps the Seahawks. A little.

Dunlap has been largely invisible for the Bengals this season: just one sack and (per Sports Info Solutions) six hurries and seven pressures as a more-or-less full-time starter. He’s also a worthy cover subject for Veteran Who Needs a Change of Scenery Magazine. Dunlap is a 31-year old holdover from the early 2010s Bengals playoff teams who has suffered through years of irrelevance and rebuilding, which can sap anyone’s enthusiasm (see A.J. Green).

Dunlap recorded nine sacks last year and has experience sliding all over the formation as an edge rusher. He should respond to Pete Carroll’s upbeat coaching and provide more juice than the Seahawks are currently getting from situational edge rusher Damontre Moore, who has been knocking around the bottoms of benches since his days in Tom Coughlin’s New York Giants doghouse.

That said, the Seahawks defense needs more help than one bargain-bin pass rusher can provide.

Seahawks Trade News and Rumors: Could the Seahawks be in the market for Stephon Gilmore or Xavien Howard?

Despite some back-and-forth midweek trade news and rumors, Howard is almost certainly not on the trading block: The Dolphins are starting to turn the corner, and he is a core veteran who is playing well. (Before you play the “Howard wants out ‘cuz he is mad that Ryan Fitzpatrick was benched” card, remember that Howard intercepted Russell Wilson in the end zone to keep the Dolphins in the game against the Seahawks, only to watch Fitzpatrick throw a fourth-quarter interception and fail to lead a touchdown drive until the Seahawks safely extended their lead, so he is probably not that impressed by the FitzMagic).

Howard also made nary a peep through years of Adam Gase tomfoolery, which takes some doing. The Dolphins may listen to blockbuster offers, but they would prefer to keep him.

Gilmore may be available, but he would command Jalen Ramsey-like compensation: The bidding would start with a first-round pick, plus sweeteners. The Seahawks traded their first-round picks in 2021 and 2022 plus some change for Adams. Bill Belichick and his personnel majordomo Nick Caserio are not the Madden AI, your cousin who makes dopey fantasy trades, or Bill O’Brien: They won’t be fooled into trading Gilmore for a bundle of late-round picks and benchwarmers from Seattle. The Gilmore to Seahawks trade news and rumors were fun while it lasted but looks unlikely at this point.

Sifting through the rummage bin

The Cowboys parted ways with defensive tackle Dontari Poe and cornerback Daryl Worley this week. Worley has had a miserable year, though the Cowboys laissez-faire approach to coaching may be part of the problem: He’s tall, can line up all over the secondary, and qualifies as a warm body who is no worse than the current Seahawks fifth and sixth defensive backs. He may be worth a phone call. Poe is toast.

In general, edge rusher is the one position at which a discount veteran can be plugged in for 25-snaps per game during the middle of the season and make a real impact. The Seahawks could try to low-ball Texans strictly-the-acting-GM (NARRATOR: he’s clearly the permanent GM) Jack Easterby for Whitney Mercilus. But Mercilus would likely cost a second-rounder, and the Seahawks risk diminishing returns if they trade their entire 2021 Draft class for help this year.

Atlanta Falcons first-round disappointment Takk McKinley would be a safer option: available for a lower price tag, higher upside, more likely to benefit from a change of scenery to a team that lets the guys be guys a bit. With someone like McKinley joining Dunlap in their 3rd-and-long package, the Seahawks won’t let Kyler Murray types relax in the pocket and pick them apart in the fourth quarter quite as often anymore.

There are other veterans who can be pried off the bottoms of weak rosters in exchange for late-round picks over the next few days. But while the Seahawks should be as aggressive as they can in exploring trades amidst all the news and rumors, they must be realistic about the fact that there is only so much that can be done by prying veterans off of weak rosters. And they may already have done most of what they can by trading for Dunlap.

Help from within the Seahawks roster, including Jamal Adams and Jordyn Brooks

The trade most likely to rescue the Seahawks defense is the one they already made. Adams was originally slated to return for Sunday’s showdown with the San Francisco 49ers, but his timetable is now cloudy after missing Wednesday’s practice. Adams upgrades both the pass rush and the pass defense over the middle of the field while adding back some much-needed depth and versatility in the secondary.

Jordyn Brooks’ emergence should also help. Brooks, the 27th pick in the 2020 Draft out of Texas Tech, made his first start against the Arizona Cardinals on Sunday night and held his own. Brooks has all the tools to be a versatile three-down linebacker who can blitz effectively and not get lost in coverage once his eyes and instincts improve. If the Seahawks insist on staying in their base 4-3 package more than any other team, Brooks gives them someone who can run with most tight ends.

The Seahawks don’t need to recreate the Legion of Boom. They just need to generate more than five sacks per month. Otherwise, they will fall behind in the NFL’s toughest conference and waste an MVP-caliber season by Russell Wilson. And they need to figure things out fast: They face the 49ers, Buffalo Bills, Los Angeles Rams, and Cardinals over the next four weeks, four opponents that no team wants to face with its defense tied behind its back. Keep an eye on any Seahawks trade news and rumors in the days leading up to the deadline, but the team has already taken a step in the right direction.

Mike Tanier is the National NFL Lead Analyst for Pro Football Network. Follow him on Twitter: @MikeTanier. For more Seahawks and NFL trade deadline news, be sure to bookmark and visit our NFL Trade Deadline Tracker.