Can Kyler Murray and the Cardinals receivers make up for offensive injuries?

Is Van Jefferson playing tonight vs. the Cardinals?

Coming out of college, Saquon Barkley was one of the best running back prospects in recent memory, so much so that, in the 2018 NFL Draft, the New York Giants selected him with the second overall pick. Barkley had a dominant rookie season, but injuries have hampered him in the last two years. Now, the Giants must decide whether it is worth signing Saquon Barkley to a long-term extension or using the 5th-year option to keep him in New York for an extra season.

Evaluating Barkley is challenging due to his injury history

If New York is basing their evaluation of Saquon Barkley solely on his rookie season, picking up his 5th-year option and eventually giving him a long-term extension is a no-brainer. He led the NFL with 2,028 yards from scrimmage, ranking second with 1,307 rushing yards and fourth among running backs with 721 receiving yards.

As a result of his success, Barkley made the Pro Bowl and was named Offensive Rookie of the Year. In short, his first season went about as well as it possibly could have.

Unfortunately, injuries prevented Barkley from replicating that success during the next two years. In 2019, a sprained ankle caused him to miss three games. Although he still had a solid season, with 1,003 rushing yards and 438 receiving yards, it wasn’t close to his previous effort.

Then, last season, he tore his ACL in Week 2 and sat on the sidelines for the remainder of New York’s games. Functionally, he missed the entire season. In total, he missed 17 games in his first three seasons. As a result, the Giants need to think carefully when considering whether to pick up Saquon Barkley’s 5th-year option, let alone extend him further.

Since injuries in the last two seasons have so heavily impacted Barkley’s statistics, it’s worth looking at his play from a different angle. The Offensive Value Metric (OVM) is perfect for situations like this one. It is a grading system created by the (Bx) Movement to measure players based on how efficiently they produced their statistics.

In Barkley’s case, the data is somewhat mixed. He didn’t play enough snaps last season to qualify for an overall grade, so let’s examine his first two NFL seasons. His grade from his rookie season was 15.59, fairly average for a running back. However, it dropped the following year significantly. At 11.31, it ranked in the bottom half of the league.

It’s possible that his injury hampered him somewhat, causing him to be less efficient in his second season. That said, it’s never an encouraging sign to see a player regress after a year in the NFL.

The reason for Barkley’s grade declining between his first two seasons becomes clear when looking at his advanced metrics. The chart below shows three of his most relevant statistics from Barkley’s 2018 and 2019. If you aren’t a frequent reader of OVM articles or a general fan of advanced metrics, you might not be familiar with them, so here’s a quick rundown:

As you can see, the biggest difference between Barkley’s first two seasons was how often he faced eight or more defenders around the line of scrimmage. The percentage was nearly cut in half. Despite that, his efficiency rating stayed the same, and he averaged fewer yards above expectation. In other words, he was met with less resistance during his second season and yet failed to reach the same standard he set during his rookie year.

Clearly, Saquon Barkley’s overall grades don’t give the Giants a great reason to pick up his 5th-year option or give him an extension. However, his weekly grades provide a more nuanced look at his play.

The chart below shows how his grades varied on a weekly basis. The black dots represent his grades from each week, and the yellow line shows the league average grade for running backs. That dotted line you can see represents a negative grade. 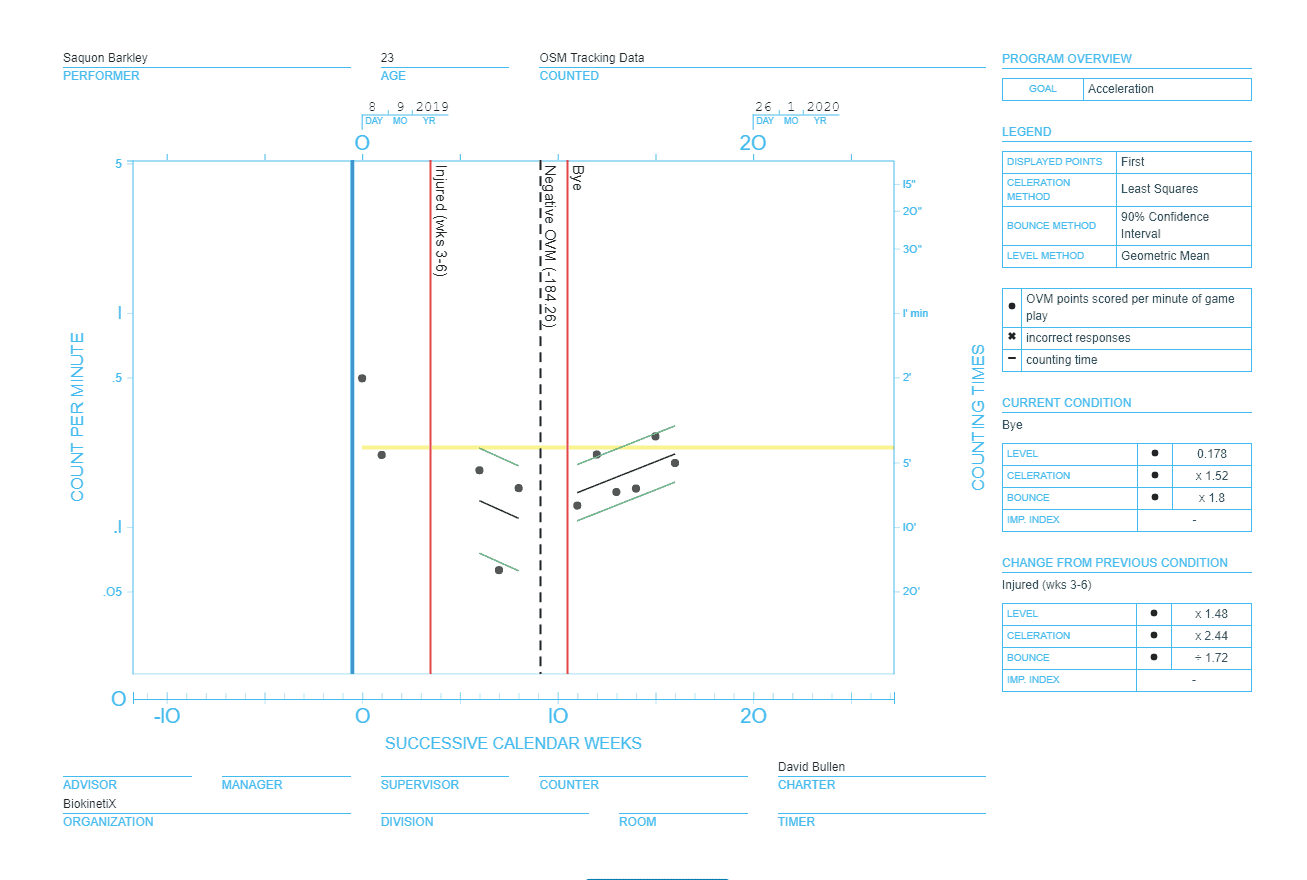 Barkley was clearly inconsistent throughout the season, but his worst performances were in the weeks after his injury. After that, his grades rose back towards the league average. That lends credence to the idea that the injury played a part in his inefficient play.

However, injury doesn’t excuse the negative grade in Week 10. It wasn’t just slightly below zero; at -184.26, it is the single-lowest OVM grade on record, nearly one hundred points lower than the next-worse grade. And that’s not all. Barkley also holds the third-lowest grade of all-time. In Week 1 of the 2020 season, he earned a grade of -42.85.

Grades that low indicate that Barkley’s play was actively detrimental to New York’s offense. In both cases, they were the result of extremely inefficient running by Barkley. In the first case, he ran 145.58 yards to gain a total of 1 yard. The second game was more efficient, but not by much, with Barkley running 235.56 yards to gain 6 yards.

On their own, each of those games would probably be viewed as a fluke. Still, it is somewhat concerning that two of his grades indicate catastrophically inefficient performances, even if the rest of his grades fall within a more normal range.

It is important to note that the OVM grade does not include what might be the strongest reason to pick up Saquon Barkley’s 5th-year option or give him an extension — his receiving abilities. Because the NFL doesn’t collect data on running backs as receivers, we can’t use them in his grades.

Therefore, we will need to rely on his box score statistics. Barkley has generally been excellent in this regard. As has already been mentioned, Barkley ranked fourth among running backs with 721 receiving yards in 2018, his last full season. His injury cut his production to 438 yards the following season, which is still a reasonable total.

We can’t discuss how efficiently he gained those yards, but that level of production can’t be ignored. Barkley has shown that he has the potential to be one of the NFL’s best receiving backs, something that must be included in his evaluation.

Despite several reasons for concern, the Giants should pick up Saquon Barkley’s 5th-year option

Spending big on a running back, a position that is often viewed as replaceable, is a risky prospect — doing so on a player who has been inconsistent and injury-plagued early in his career is even more dangerous.

Still, Barkley is a special player at the position. Running backs with his receiving abilities and rushing production are a rare commodity. As such, picking up his 5th-year option feels like a safe option. The team can see if Barkley can stay healthy and produce at a high level over the next two seasons. Then, they can revisit the prospect of a long-term extension at a later date. Hopefully, Barkley can put his difficulties from the last few years behind him.

Is Van Jefferson playing tonight vs. the Cardinals?

Can Kyler Murray and the Cardinals receivers make up for offensive injuries?