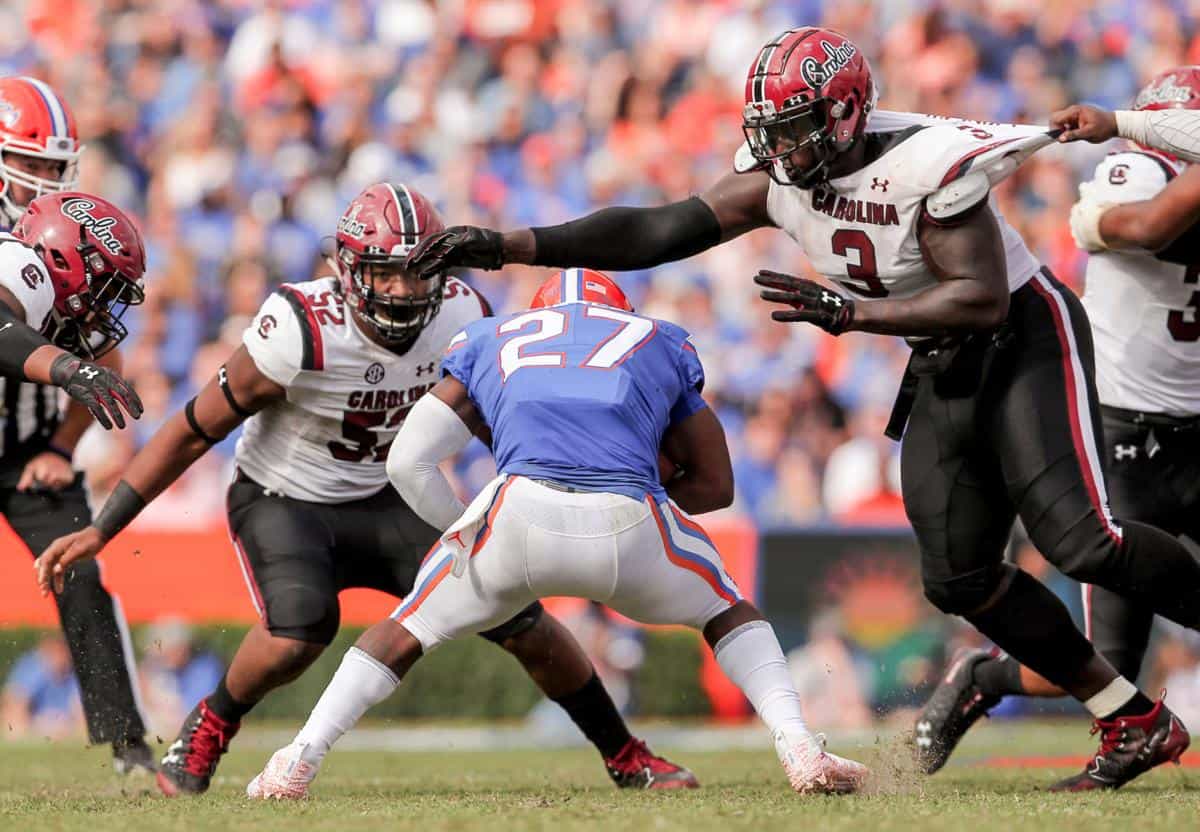 The San Francisco 49ers made five selections in the 2020 NFL Draft, and the order in which they made their selection was far from the norm. San Francisco had two picks on the first night of the draft: their own and the 13th overall pick they received from Indianapolis in return for DeForest Buckner. However, after their second selection in the first round, the 49ers didn’t make another until the fifth round. So who did the 49ers select, and what grades do they receive for their draft class?

Who did the 49ers draft?

This was an easy decision for me, and honestly, it wasn’t close. Javon Kinlaw was a top-10 player on my board and the highest-rated defensive lineman. He has a rade blend of length, bend, and athletic ability.

Despite being nearly 330 pounds, Kinlaw shows an impressive ability to bend his hips and ankles, allowing him to rush the passers in numerous ways. Unfortunately, a leg injury sustained at the Senior Bowl prevented us from seeing how Kinlaw would’ve tested, but I’m sure he would have put on a show.

Kinlaw will instantly join the 49ers as the successor to Buckner on the defensive line that many believe to be the best in the NFL. Bucker was traded for Indianapolis’ 13th overall selection.

The 49ers were able to move back a single selection with Tampa Bay and still land Kinlaw. If he can be even three-quarters of the player Buckner was in his time with San Francisco, then this was an excellent selection.

Jauan Jennings’ fate as a late day three selection was likely sealed when he was timed with a 4.72s forty. However, a 40-yard-dash time does not dictate the quality of a football player. Jennings may lack speed, but he plays aggressively.

He attacks the ball and utilizes his big frame when the ball is in the air. Once the ball is in his hands, he plays like a fullback breaking through tackles and running people over.

Jennings doesn’t exactly fit the mold of a Kyle Shanahan receiver. Shanahan has always seemed to emphasize speed and separation over size and strength for the position, so the selection of Jennings was a bit puzzling at first. However, the team lacks anyone like this. He provides size and strength, and his lack of speed will be hidden by arguably the fastest receiving corps in the NFL.

If you ask Shanahan, he might say Brandon Aiyuk was the team’s best value. Reports have come from 49ers camp that the team viewed Aiyuk as the top WR in the class. I disagree, as I viewed him as the ninth-best receiver in the class and a late-round two grade.

However, I can’t deny how strong the fit is for Aiyuk. He’s a YAC threat who acts like a running ball with the ball in his hands. He also possesses the requisite speed to get under any passes that may have been overthrown.

Aiyuk will pair with Deebo Samuel as the best receiver duo after the catch in the NFL. Aiyuk also has long arms and is willing to fight for a ball in the air. I don’t think he’s as strong after the catch as Samuel, and overall I viewed Deebo as a better prospect, but Aiyuk couldn’t have asked for a better coach to end up with.

The reason McKivitz is listed as an “OL” vs an “OT” is simple: I believe he’ll be playing as both a tackle and guard in the NFL. That’s also why he is this class’s biggest sleeper. McKivitz played tackle exclusively during his time at West Virginia, but he spent some reps at guard during the Reese’s Senior Bowl. He also has less than ideal arm length for a tackle.

With the 49ers tackle duo of Trent Williams and Mike McGlinchey being one of the better duos in the league, it’s unlikely McKivitz sees much playing time as a tackle. However, Williams does of an extensive injury history, so it was wise of the team to invest in a quality back-up.

McKivitz has the power and attitude to play on the interior as well. Though he may not be a started while on his rookie contract, he could be an invaluable depth piece for the team.

The 49ers had mixed results with the few selections they had. With their two first-round selections meeting their biggest needs. The defensive line needs Kinlaw, my highest rated interior defender. Aiyuk should be able to make an impact at WR for their offense.

While I’m not a fan of where the 49ers took Aiyuk and that fact that they had to move up for him, I can recognize that his fit with team is excellent, and he should have a productive rookie season.

On day three, they took two players in McKivitz and Jennings that I really like, especially when considering what their rolls with the team will be. The team also needed TE depth, but in my eyes, someone like Thaddeus Moss or Hunter Bryant would have been better value than Woerner.

Overall the lack of draft selection hurt the 49ers, but they did a good job selecting players to fill immediate needs. Solid class as the re-up for another Super Bowl run continues.