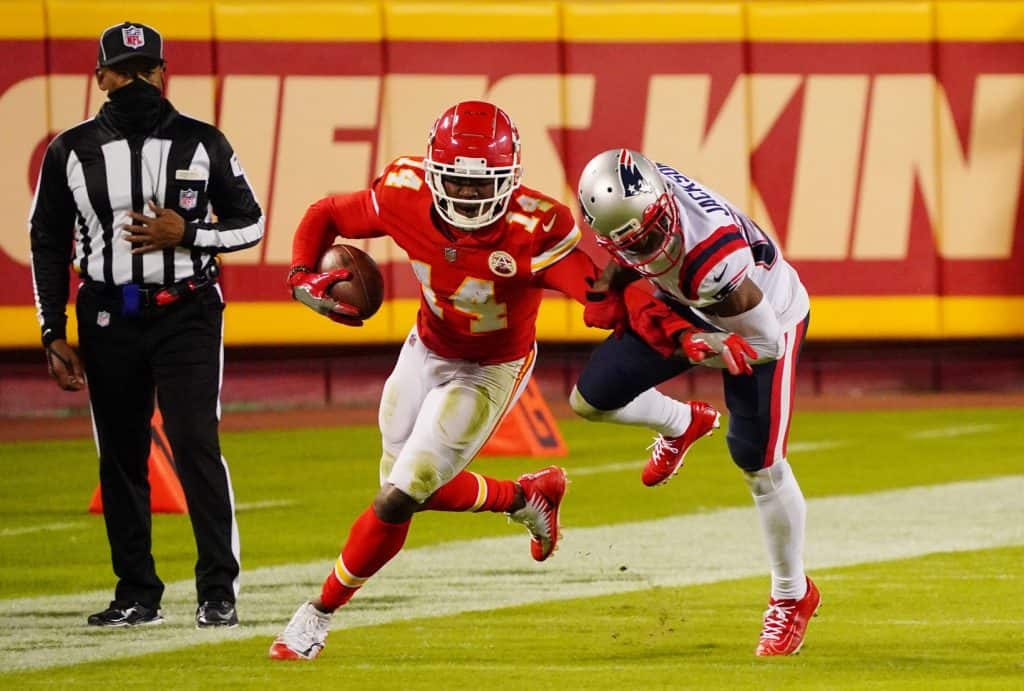 As the NFL wide receiver market dries up, names of players such as Kansas City Chiefs WR Sammy Watkins start to end up in more and more rumors. For teams looking for a veteran presence, the former fourth-overall pick could be the answer.

Still just 27 years old, Sammy Watkins should have several potential landing spots calling him. The only issue is the reduced cap creating a somewhat stagnant market.

Could the Chiefs attempt to re-sign Watkins to a small veteran deal?

After back-to-back Super Bowl appearances, would Sammy Watkins take the hometown discount to be a part of this potential dynasty? Mahomes is on his way to be the greatest ever to play QB. They have Tyreek Hill, Travis Kelce, and even Mecole Hardman as pass catchers. The pressure is off Watkins in Kansas City rather than trying to jumpstart his career again.

The question is, can both sides come to an agreement. Watkins restructured once, and this could be the last big contract he signs as a professional. At some point, you have to think of yourself and get all the money you can before it is all said and done.

That in itself is the issue as this is not a market conducive to large contracts. Even JuJu Smith-Schuster took a one-year, $8 million deal because the money simply is not there. Watkins could be in the same boat, unfortunately. The Chiefs have not brought in any other pass catchers so far, leaving them open as the potential landing spot for Sammy Watkins as rumors continue to swirl.

The Ravens need to solidify the passing game and add another option with Marquise Brown. Signing Sammy Watkins would give Lamar Jackon three viable passing options, all with complementary skillsets.

During his time in Kansas City, Watkins found out how to bring his skillset to an offense while not needing to be a team’s top option. Combined with Mark Andrews and the Ravens’ rushing attack, Sammy Watkins helps make the Ravens a scary team in 2021.

The Chicago Bears could look to add Sammy Watkins

Allen Robinson signed his franchise tag, but that does not reduce the need to address the position.

Darnell Mooney looks like a legit WR2 for an NFL offense. But after him, who else? Anthony Miller is apparently on the trade block, and if those rumors are true, Sammy Watkins could be a replacement.

Would the Detroit Lions come calling for Sammy Watkins in 2021?

If you want to talk about a team with receiver issues that needs addressing, the Detroit Lions are at the top. As free agents this offseason, both Kenny Golladay and Marvin Jones are out the door in 2021. Even after their free agency moves so far, the Week 1 starters at WR as of now would be Breshad Perriman, Tyrell Williams, and Quintez Cephus. No disrespect, but that is not an NFL-caliber receiving room.

The Lions are in a full rebuild. They have a new head coach in Dan Campbell, and after trading for Jared Goff, Sammy Watkins on a somewhat cheap deal could be a smart move as it allows them to at least be competent on the perimeter.

After losing Kendrick Bourne in free agency to New England, the WR3 spot on the depth chart is wide open. While they already have an incredible group with Brandon Aiyuk, Deebo Samuel, and George Kittle, there is no reason not to get better when the chance presents itself.

While not the WR1 role he might be searching for, even a one-year deal with San Francisco could help reset the market for Sammy Watkins.

Philadelphia still needs to address the receivers for 2021

Despite this being a rather loaded WR free agency class, the Philadelphia Eagles have remained dormant. With Jalen Hurts as their starter, bringing in Sammy Watkins could help in two areas. First, it would add depth to a relatively weak wide receiver room by adding a proven veteran who has the talent to be a difference-maker. Secondly, Jalen Reagor can now slide into a more natural position rather than on the perimeter as the WR1.

While this would not take them out of wide receiver conversation in the draft, adding Sammy Watkins would help rebuild this passing attack.

What is Sammy Watkins’ market value in free agency?

According to Spotrac, Sammy Watkins has an estimated market value of $10.6 million on a two-year, $21.313 million contract. But let’s be honest with ourselves and admit this will never happen. Even in an inflated market like we will see next year, Sammy Watkins will not pull in a $10 million AAV salary.

In his 86 games, Watkins has compiled 321 receptions on 546 targets for 4,665 yards and 33 touchdowns. He signed a three-year, $48 million contract with Kansas City back in 2018. However, due to cap issues and the willingness to help the team, he restructured his deal heading into 2020. Watkins bet on himself and signed an incentive-laden deal that could have netted up to $16 million if he hit specific figures.

Unfortunately for Sammy Watkins, 2020 was just an okay season rather than the explosive one he hoped for when he inked his new deal. He ended the regular season with 37 receptions on 55 targets for 421 yards and 2 touchdowns.