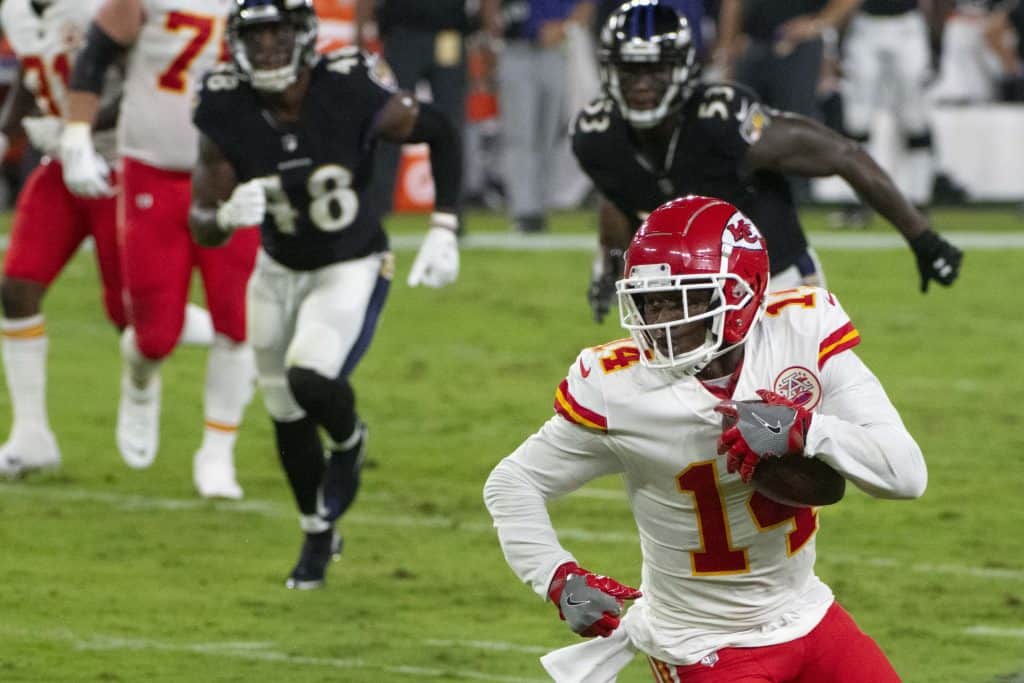 After an injury-plagued 2020 NFL season, where are the potential landing spots for Kansas City Chiefs WR Sammy Watkins in free agency? Let’s take a look at some of the places Sammy Watkins could find success in the next stage of his career.

At just 27 years old, Sammy Watkins still has plenty in the tank for an NFL team in free agency. Let’s break down some of his possible destinations.

What the Dolphins really lack right now is a seasoned receiver that Tua Tagovailoa can trust. That relationship does not seem to be there with DeVante Parker. Therefore, that crafty veteran role could make this the perfect landing spot for Sammy Watkins.

While he may not be a guy who can dominate cornerbacks with any physical traits given his injury issues, he still has the pedigree of a top-five overall selection in the NFL Draft. Watkins brings plenty of experience to a team looking to become a perennial challenger in the AFC. It is not the exciting pick Dolphins fans will want. However, it could be just what their young QB needs.

The Ravens also need a solid secondary option in free agency, making this an ideal landing spot for Sammy Watkins. Marquise Brown is the star on the outside, but he needs a Robin to his Batman. Watkins is used to playing that role for Tyreek Hill. He understands that he will not always be the center of attention for the offense, which is extremely important.

If Lamar Jackson has both Brown and Watkins, he will have the ability to scare defenses. Throw in this offense’s running ability and tight end Mark Andrews, and Baltimore could have a potent offense.

The Bears need a long-term plan in place at the receiver position. Darnell Mooney seems an option to be the long-term No. 1. Therefore, the Bears make sense for Sammy Watkins as a landing spot for that No. 2 role.

Allen Robinson is likely playing out his final year in Chicago on the franchise tag. Bringing in Watkins could allow the Bears to let Robinson walk next offseason. Chicago would then have a combination of Mooney and Watkins to build their offensive arsenal around.

The Eagles have plenty of young talent in Dallas Goedert and Jalen Reagor. Therefore, what they need is to bring in an experienced receiver who brings reliability to the position. Watkins’ injury concerns limit his reliability, but when he is on the field, he can be a solid contributor.

The 49ers have just lost wide receiver Kendrick Bourne in free agency. Thus, they need a focal point of their passing offense, and Watkins can provide that. His presence would allow Brandon Aiyuk and Deebo Samuel to make explosive plays off of his solid work.

It is not a sexy role, but it is crucial for a team looking to challenge without a true WR1. For that reason, this could be an ideal landing spot for Sammy Watkins.

What is Sammy Watkins’ market value in free agency?

Spotrac values Watkins at around $10 million per year. The comparative market value would be Willie Snead, Albert Wilson, and Tyrell Williams. However, the best comparison is likely Sterling Shepard, who signed a four-year, $41 million with the Giants.

His struggles with injury in 2020 could see a team try to push that number closer to $7.5 million per year — or at least ensure they have the ability to move on from the deal after one year. On the other hand, with several palatable landing spots available, Sammy Watkins should be able to find a solid market in 2021.

Be sure to follow us on Twitter (@PFN365) to stay up to date with all things around the NFL. Also, continue to visit Pro Football Network for NFL news and in-depth analysis concerning the new 2021 NFL league year.