Ryan Tannehill and the Titans' offense have gotten off to a rough start this season. The advanced metrics suggest Tannehill is struggling.

Ryan Tannehill’s stint with the Tennessee Titans’ offense started well for both parties. However, in their third season together, the advanced metrics indicate that Tannehill has struggled.

Tennessee’s season hasn’t gotten off to a spectacular start. However, that is primarily due to an upset loss to the struggling New York Jets. If that hadn’t happened, the Titans would be 4-1, with their only defeat coming against the undefeated Arizona Cardinals. Unfortunately, we can’t change reality.

Tannehill hasn’t exactly dominated during this early stretch, throwing for 1,251 yards, 6 touchdowns, and 3 interceptions. Those aren’t awful statistics, but they are far from elite. Compared to the NFL’s other quarterbacks, Tannehill’s box score is mediocre at best.

The advanced metrics suggest Tannehill has fallen off dramatically this season

An inquisitive fan might wonder if Tannehill’s low production so far this season results from the Titans’ run-focused offense. And they’d be right — but only to a certain extent. The advanced metrics indicate Tannehill is having a significantly reduced impact in 2021 as compared to his two prior seasons.

To demonstrate what I mean, let’s turn to the Offensive Value Metric (OVM). The OVM is a grading system created by the (Bx) Movement to evaluate players based on how much they contributed to the creation of their statistics, rather than the statistics themselves.

During his first two years in Tennessee, Tannehill was exceptional in this metric. His grades of 34.36 and 30.17 ranked first and second, respectively, among qualifying quarterbacks over the past two seasons.

Clearly, despite the Titans not being a pass-heavy offense, Tannehill was making the most of the opportunities with which he was presented.

Unfortunately, Tennessee’s QB hasn’t maintained that level of play so far in 2021. His grade of 22.16 ranks 22nd among all qualifying quarterbacks. Of course, this represents a relatively small sample size, but it still presents reasons for concern — especially with the Titans somewhat underperforming as a team.

To put Tannehill’s grades this season into context, let’s look at how he performed on a weekly basis during the entirety of his time in the Titans’ offense.

In the charts below, you can see Tannehill’s grades from each week of 2019 and 2020, marked by the black dots. For comparison, the average regular-season grades for quarterbacks from those seasons are represented by the yellow lines. 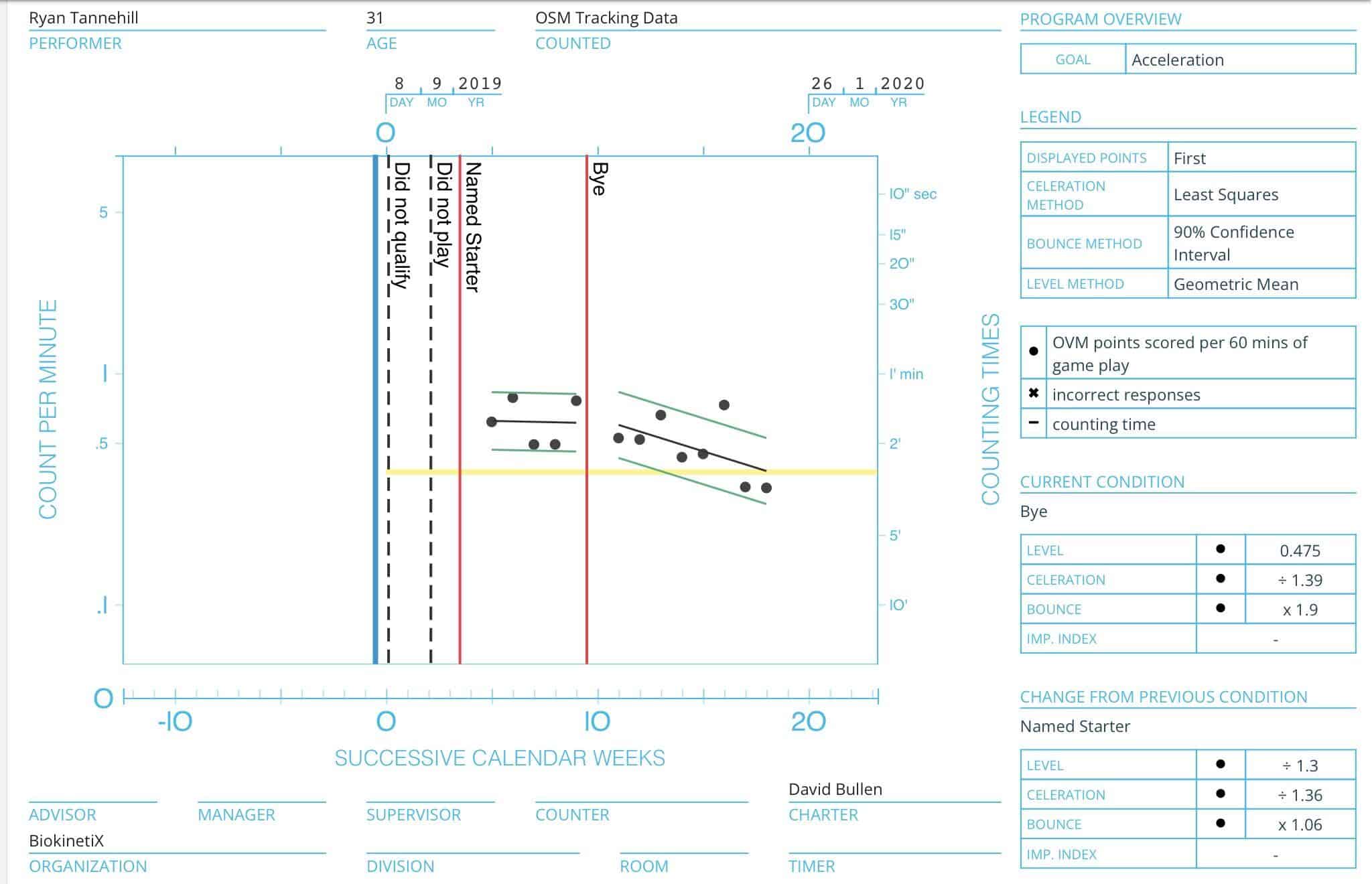 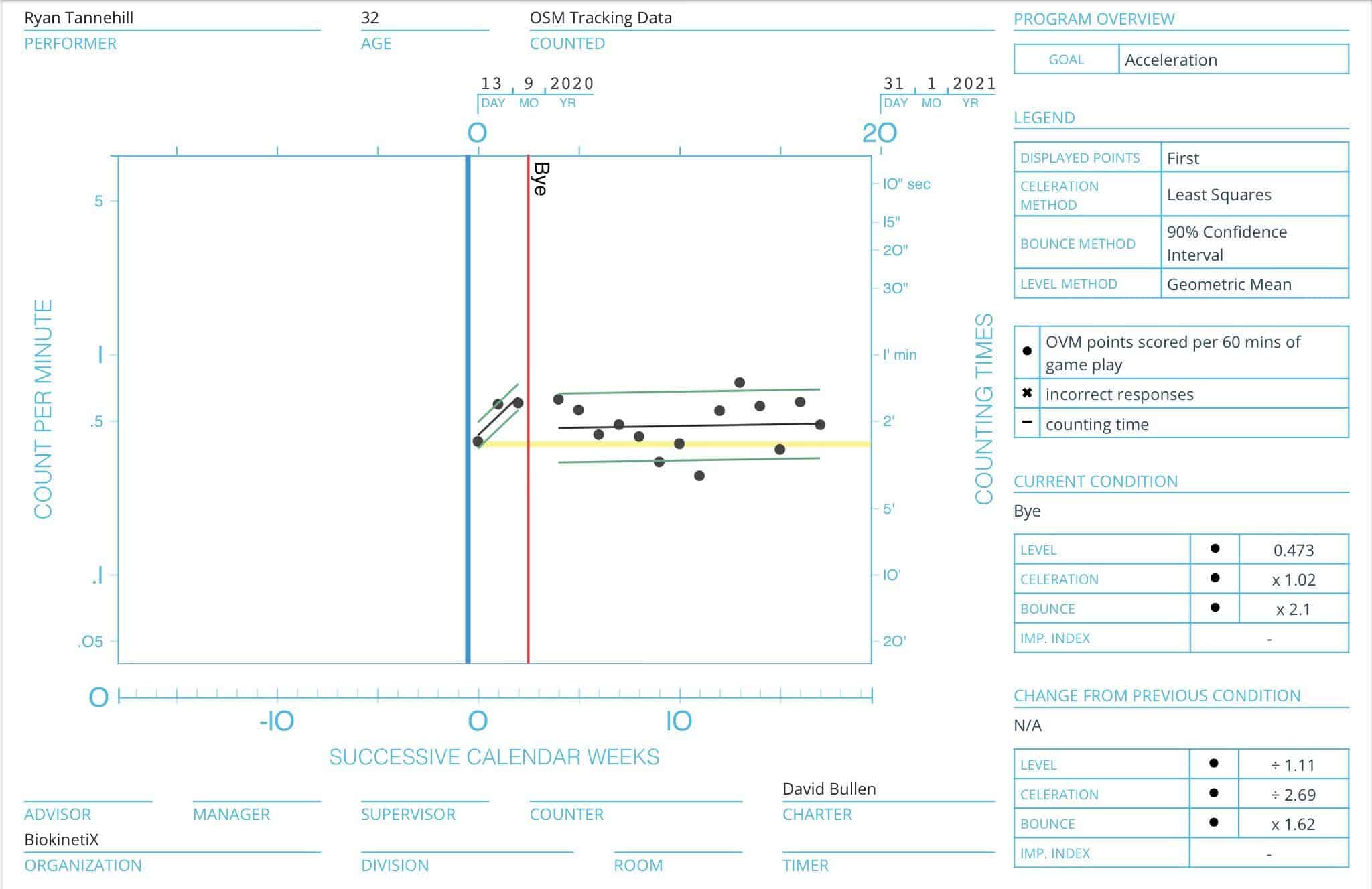 As you can see, most of Tannehill’s grades were above the league average, and he was fairly consistent as well. Tannehill only earned four grades below 20 points across both years — he’s already matched that total in 2021. Furthermore, he earned 15 grades above 30 points. He only has one such game this season.

Again, we are only five games into the season. That said, Tannehill is on track to have significantly worse advanced metrics than he did in 2019 and 2020.

The drop in Tannehill’s OVM grade this season is fairly simple to explain statistically. His performance in most of his metrics has remained relatively similar, with one notable exception: the difference between his actual completion percentages and what the NFL’s projections suggested they should have been.

Since Tannehill’s other statistics are similar across all three seasons, that decline indicates that he is attempting passes of roughly the same difficulty. However, he’s completing them at a substantially lower rate.

There were significant changes to the Titans’ WR corps this season

One factor that could be contributing to Tannehill’s struggles is the changes in Tennessee’s receiving corps during the offseason. Corey Davis, Jonnu Smith, and Adam Humphries are all playing for new teams in 2021.

Those aren’t huge names, but they represented three of the Titans’ top-five receivers in each of the last two seasons. Combined, they accounted for 1,414 yards in 2019 and 1,660 yards in 2020.

Tennessee did trade for Julio Jones in an attempt to mitigate that trio’s absence, but Jones has already missed two games. Of course, star receiver A.J. Brown is still around, but he’s been banged up. Furthermore, he’s never been the most consistent receiver, relying more on explosive plays for his production.

Those changes have undoubtedly affected Tannehill’s performance this season. Still, we shouldn’t completely absolve him of blame.

Even without Tannehill playing well, Tennessee should still make the playoffs

Despite Tannehill and the Titans’ overall slow start, they should still win the AFC South. The other three teams in the division have combined for four wins through the first six weeks of the season.

Barring a miraculous turnaround from one of their rivals, the Titans seem virtually guaranteed a spot in the playoffs. That said, it seems unlikely they’ll make it far if Tannehill can’t turn things around.